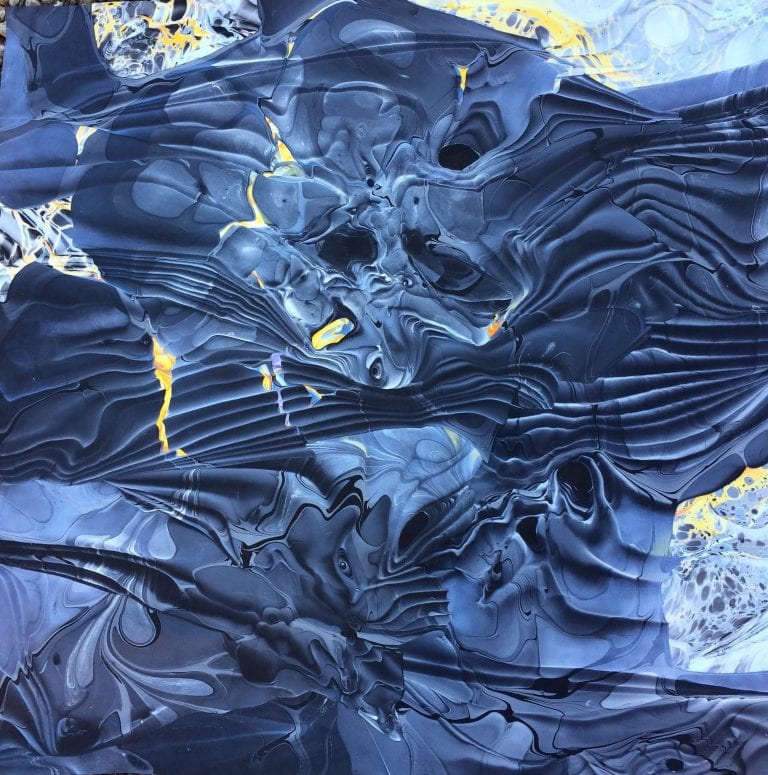 The data and the flood: Artists respond to climate change in prophetic “Weatherwise”

Weatherwise/Otherwise: Artists Respond to Climate Change, at Dalton Gallery of Agnes Scott College through December 9, had turned prophetic by the time of its opening in September. Curator Dorothy Moye had chosen as its central artwork Mary Edna Fraser’s Charleston Airborne Flooded (South Carolina), a large batik wall hanging depicting an aerial map of Charleston and environs flooded in an era of rising oceans. The hurricane which caused flooding on the South Carolina coastline actually submerged, temporarily, an even larger land area.

This unexpected meeting of fact and abstraction was a boost in instant relevance for a show that confronts a major conceptual problem: namely, that the currents of climate that create weather conditions are too big to fit comfortably into our everyday mental categories. The visible effects are dependent on invisible combinations of evaporation, condensation and atmospheric pressure that constitute what theorist-philosopher Timothy Morton calls a “hyperobject” — a single entity so vast and so amorphous at the literal and metaphoric edges that its details forever threaten to elude our verbal definitions and our methods of investigation. The planet-wide systems we call climate and weather are about as hyper as things get within the Earth’s gravitational field.

The show itself is something of a miniaturized hyperobject, in the sense that it simultaneously tries to educate about climate change and educate about the many ways in which experimental photographic and craft-based art can analyze and communicate — in this case, about the topic of climate change. Nothing less would be expected from the curator who originated the ambitious and nationally respected annual juried exhibition of experimental artists’ books at the Decatur Book Festival, but it means the show reveals its dual purpose only slowly. It requires time to absorb its lessons.

Beautiful but bewilderingly complex, Nathalie Miebach’s immense wall pieces are composed of woven color-coded strips containing numbers, symbols and different ways of organizing them. They reflect data regarding temperature ranges over time periods, and the rhythms of change thus visually expressed can also translate into musical scores, compositions that Miebach has performed as a different way of making invisible processes and numerical relationships into works of art. Sibling Rivalry is probably the most complicated of the visual works, a rendition of hurricane data in terms of galloping racehorses bearing numbers, ships with furled or billowing sails and racks of lettered dominoes arranged by decades: 1950, 1960, 1970. . . . A glossary of symbols is necessary to translate these pieces out of private mythology and back into intelligible allegory, and Miebach provides one.

The same dilemma afflicts Bettina Matzkuhn’s embroidered-linen Schmetterlinge “butterfly” maps of weather systems (not merely a visual metaphor, the butterfly shape presents the continents without distorting their relative sizes). An accompanying video, The Zoology of Weather, explains what is represented in images that otherwise would be beautiful but conceptually opaque. As the artist explains how her artworks relate to the way in which weather systems operate, she remarks, “The big picture spans more than the eye can see.”

Peter Bahouth’s stereoscopic photographs, VENT: a photographic response to the heat and pressure we put on the planet, also use metaphors and analogies to depict the disturbances in our planetary weather. His landscapes “vent” or “let off steam” in actual clouds of gas or mist symbolizing the response from an angry planet to the stresses our environmental depredations have placed upon it.

Other artists in the show find various ways of representing the details of those stresses and the actual results. Bruce Bobick takes the most playful approach by juxtaposing tropical flora with Antarctic fauna in his watercolor images, or creating a Patch for the Ozone Layer to protect the penguins sheltered beneath it. Drawings by two Canadian Inuit artists from Cape Dorset, Nunavut (Ohotaq Mikkigak and Ningiukulu Teevee), represent the effects of Arctic oil drilling in vivid symbols and images ranging from a looming offshore rig to a sick polar bear next to a spilled oil barrel; a third artist, Qavavau Manumie, seems more concerned with environmental pressures on the Inuit people themselves. Kathryn Kolb offers unusually striking evidence of the global extent of deforestation by zooming in on Google’s aerial views of stretches of green that appear at a distance to be continuous forest but prove, on closer inspection, to be no more than contiguous patches of trees interrupted by cleared land and clusters of buildings.

Carolyn Halliday’s metal-encrusted stumps and woven copper wall hanging, Japanese Beetle Lace: Birch, are lovely invocations of the effects of climate change on her own local woodlands, using such craft techniques as knitting, with wire instead of thread, to mend damage or illustrate the ruin wrought by insect populations. Here, as with the Nunavut artists, a great deal of prior environmental information is taken for granted. Although Halliday explains her technique and discusses her frequent conversations with the ecologists in her life, I’m not quite certain of the relationship between environmental stresses and the Japanese beetle infestation or the heavy flooding she mentions with regard to the stumps. But these are extraordinary works of art even if the particulars of their relationship to the theme of climate change remain uncertain.

Karen Reese Tunnell’s work also leaves implicit the relationship between turbulent atmospheric conditions and climate change, but her marbled paper collages of types of cloud formation are remarkable works of art, and her titles and captions are educational explications of atmospheric dynamics from the newly named Asperitas (Latin for “roughness”) to the witty Cumulus Granitus (about which Reese comments, “Pilot terminology for actual mountain peaks that are indistinguishable from clouds; a dangerous condition.”)

John Cargile’s sculptures marking water levels at various stages of flood conditions in his home territory (the Venice of Marker 1: Venice is not the Italian city but the first town one passes when entering the Mississippi River from the Gulf of Mexico) have an obvious relevance to the exhibition topic. On further inquiry, so do the abstracted forms he considers symbolic boats. (He writes about them, “As weather becomes increasingly erratic, we may need to build sturdier ships for unpredictable seas.”)

The exhibition also includes the several batik maps by Mary Edna Fraser used as illustrations in Global Climate Changer: a Primer, as well as a display copy of the book. The volume’s accessibly written text includes a chapter that refutes in some detail, point by point, most of the claims advanced by climate change skeptics, and some exhibition visitors might wish the volume could be made available to present-day governmental decision makers. Fraser’s illustrations make the complex subject more enticing, and the same can be said for Weatherwise/Otherwise as a whole.