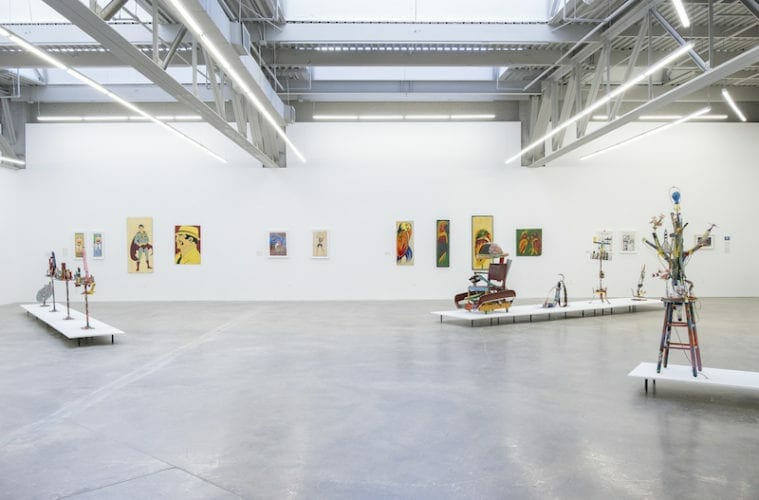 A gallery view of "The Life and Death of Charles Williams" at Atlanta Contemporary through April 19. The self-taught Kentucky-born artist (1942-1998) largely made work inspired by movie and comic-book superheroes. (Photo by Kasey Medlin)

Curator Phillip March Jones has assembled a glorious cacophony of works in the must-see survey show The Life and Death of Charles Williams at Atlanta Contemporary through April 19. Immediately, a jaunty papier-mâché Pencil Rocket beckons us into the clean, roomy, white gallery space. Both phallic and fabulous, the giant pencil tilts provocatively upward, driven by salvaged fan blades. It’s a whirligig, an optimistic signpost, pointing the way into the jumbled world of Charles Williams’ obsessive creativity. Yet it is also a fragile object, restrained and contained, cut off from exuberant flight by the necessity of the curator’s protective glass. It is a fitting microcosm of the show: a tale of creation and transformation, elevation and energy, pencils and power, joy and death — all clinically removed from their natural environment and in the end, all too perishable.

This biographical show makes it hard to separate the work from the context in which it was created. Born in 1942 to a Kentucky coal-mining family in the rural hollow of Blue Diamond, Williams had an early fascination with pop culture. He went to the segregated local movie theater whenever possible to see action stars like Superman, Batman, Tarzan, Red Ryder and Wild Bill Elliott. At age 7 or so, he began teaching himself to draw by copying superheroes from the pages of comic books. Drawing became his obsession, somewhat to the deficit of his schoolwork.

As an African American man and a high-school dropout, Williams faced limited opportunities. A decision to join the Breckinridge Job Corps Center in Morganfield proved providential not just for his reading and writing skills, but also for his growth as an artist and storyteller. He worked on the camp’s weekly newspaper and began flexing his skills by creating a comic strip, J.C. of the Job Corps, which filled the paper’s back page each week.

The Contemporary exhibit features several photocopied pages from the strip, capturing most of a story line that urged young men to join the Job Corps as an alternative to getting in trouble with the law. This work is a bit cluttered and visually crowded but foreshadows themes that repeat later: the African American hero providing leadership without compromising personal power or style. It also serves as a benchmark for appreciating the growth in Williams’ visual sophistication as exhibited in panels from such later comic heroes as the Amazing Spectacular Captain Soul Superstar and Captain Thirteen, and the minimalist humor of the Cosmic Giggles series. Williams graduated from the Job Corps in 1967 but was only able to find janitorial jobs. He started working in the cleaning services for IBM in Lexington, but his creativity was unrepressed. He began transforming the yard of his duplex home by painting large-scale cutouts of the comic-book characters he loved as a kid.

A mighty Batman cutout hangs beside the exhibit’s introductory text. Broad-shouldered and square-jawed, the hero has one hand in a fist, ready for action. The other hand is ambiguously placed. Is it in a pocket, resting on the hip or holding a concealed weapon? The lines are bold and broadly curved. The bat symbol seems to pop off the chest, and the long, pointed ears of the cowl evoke the Golden Age origins of the Caped Crusader. It wears the clunky costume of the movie-serial Batman. The hues are muted, and a bit jaundiced, as are many of the colors throughout the exhibit — likely due to the use of house and sign painter’s paints and the yellowing of polyurethane finishes. The mighty Batman cutout is made of painted plywood. (Photo by Kasey Medlin)

Opposite Batman, a wall-sized photo shows Williams’ yard and the tree that was the focal point of his outdoor exhibit. The trunk is painted, as are smaller trees and a nearby fence. A painted Superman cutout is suspended up the trunk, hands on hips and footless.

It’s another ambiguous representation. The piece shows the hero’s classic standing pose, but its placement several feet above the ground evokes the ability to fly. Several vessels are alongside the giant photo — a collection of branching stumps painted with patches of color and decorated with various materials. Some sprout artificial leaves and flowers, others add dried plants, while a few include circuits, wires and found objects. The colors are deep reds, whites, Tole blues and mustard yellows with a few accents of greens, deep blues and maroon. As a group, they feel earthy and sentimental.

The IBM job gave Williams access to office supplies and cast-off lumps of plastic — the residue of the factory’s manufacturing processes. This was a fertile ground for his forager tendencies and a growing obsession with pencils. The exhibit includes a breathtaking display of the functional sculptures that resulted. A single giant table presents scores of Williams’ Pencil Holders. These assembled sculptural forms are made from scrap wood, paint, toys, circuits, vaguely brain-shaped lumps of plastic, light bulbs, feathers, flags and more.

This is opportunistic art-making, taking whatever he could find and elevating it with care and humor. Many pieces resemble ships, others evoke lamps or strange industrial machines. Some are neatly painted, others ooze and drip, but all are perforated with a riot of holes for holding pens and pencils. Most of the pencils appear brand new, with untarnished erasers. There are even pencils embossed with Williams’ name. The overall effect of seeing so many of these exuberant creations on one table is one of an overflowing impulse to create. Even though there are many instances of whimsy and simply goofy humor among the items chosen, there’s also an imbuing of importance. One feels certain that if Williams were alive he could tell you the story behind each choice, the narrative and mindset birthing each piece.

The walls of the exhibit’s main room celebrate the aforementioned comic strips and superhero paintings, while the floor is dedicated to the assembled sculptures. Fantasy Automobile is perhaps the most seductive piece. It’s a transformed chair made as a homework assignment for a sculpture class Williams audited at the University of Kentucky. Any kid who’s ever sat in a cardboard box driving a make-believe car will immediately feel the nearly irresistible urge to sit in that chair and be empowered to escape the mundane world and its dead ends. A plastic monkey from the game Barrel of Monkeys. (Photo by Kasey Medlin)

The exhibit’s final wall tracks the sad epilogue of the artist’s life. Shortly after receiving some recognition for his artwork, Williams contracted HIV/AIDS and suffered extreme poverty. His illness and starvation took a toll on his body and his outlook. The final paintings here are bleak collages of discarded liquor bottles and the ever-present miscellany of his forager lifestyle.

Gone, however, are the earthy colors and joyful boundary-breaking. They’re replaced by viscous black tar held in rigid containing frames. After reveling in the artist’s optimism and undaunted quest for empowerment, the final wall is jarring in its evocation of despair. Yet even in the misery, the bright blue of a plastic monkey from the Barrel of Monkeys game somehow defies the pain with one last playful wink.