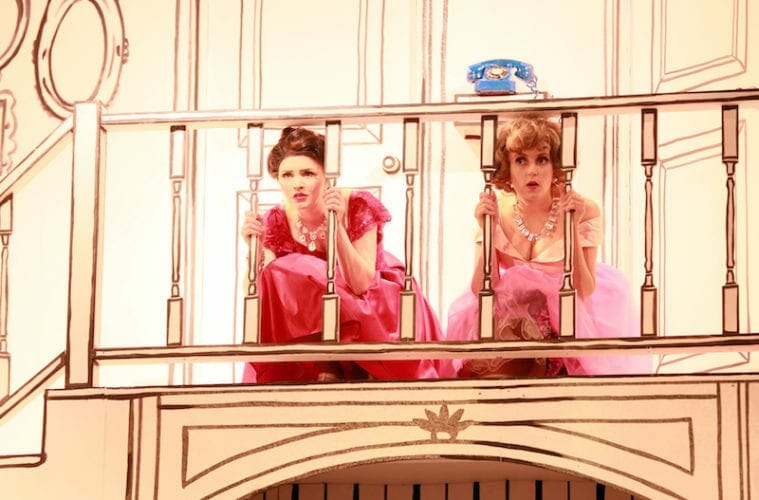 Caroline Ficken (left) is Meg and Casey Gardner is Audrey in the Ken Ludwig farce "Leading Ladies" at Georgia Ensemble Theatre through March 8. The set design is by Stephanie Polhemus, costumes by Alicia Kot. (Photos by Dan Carmody)

What would you do if you had a chance at $3 million? For the main characters in Ken Ludwig’s Leading Ladies, deception is the only option. That decision sets up a delightful comedy of errors (through March 8 at Georgia Ensemble Theatre).

The scheming begins when two struggling Shakespearean actors stage their touring show, Scenes From Shakespeare, for an unruly and disenchanted Moose Lodge audience. The situation isn’t ideal and, while waiting for a train, they learn about an ailing woman who wants to leave her estate to her nephews.

Leo (Robin Bloodworth) seizes on the chance to get the funds that he and partner Jack (Allen Dillon) need to chase fame in Hollywood. They decide to impersonate the nephews only to learn that the boys — Max and Steve — are really Maxine and Stephanie. If you know any of Ken Ludwig’s other work (Lend Me a Tenor, A Comedy of Tenors, Fox on the Fairway, etc.),  you know that, well, hilarity ensues. 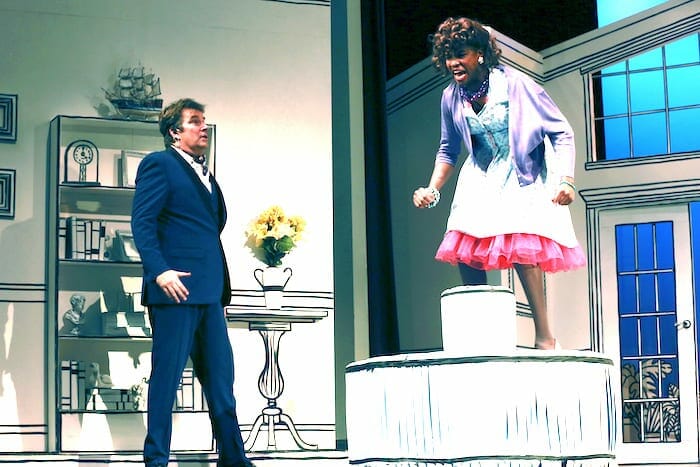 Bloodworth, as Leo/Maxine, gives us a character to root for despite his nefarious motives. He has the warmth of a dear friend, with a swindler’s appeal. The he/she split doesn’t work as well for Dillon. As Stephanie, he shines. His attitude, swag and feigned innocence couldn’t be better. As Jack, he lacks charm and feels too young for the role.

Caroline Ficken and Casey Gardner dazzle as Leo and Jack’s love interests. Ficken gives her endearing Meg a refined sense of power and a hint of independence that blends with Leo’s egotism. Gardner gives Audrey the right mix of ditz, charisma and attitude. Ficken’s chemistry with Bloodworth elevates the comic happenings, each building on the other’s work.

Under James Donadio’s direction, the actors display precise timing and enough restraint to keep the absurdity from going over the top. Donadio has crafted a rhythm in which the beats punch at the right time and keep our attention despite a fair amount of verbose dialogue.

Not everything here works smoothly, though. The opening scene outstays its welcome. An awkward sing-along and poorly delivered lines threaten the frivolous tone. Still, the farce finds its footing when Leo and Jack reach the train station.

GET manages to present an entertaining Leading Ladies with a cast that mostly clicks. The show doesn’t have much depth or leave you pondering a tough issue, but it makes a nice escape from the distractions of today.