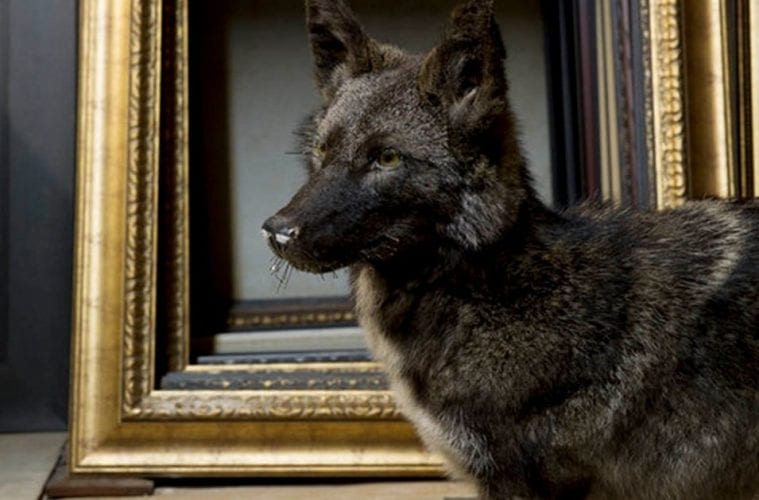 Some artists reinvent themselves with each new body of work. Others hunker down for the long haul, burrowing into themes and metaphors that become increasingly seasoned and complex with each iteration. 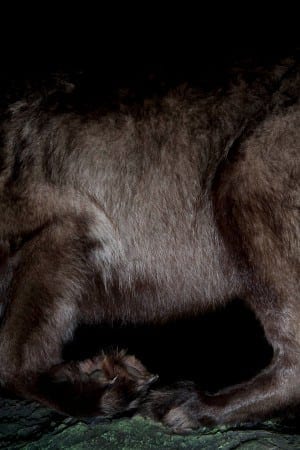 Constance Thalken is the latter. Eyes Open Slowly, her solo exhibition at Whitespace Gallery through June 20, finds a pulse in the recently departed. The suite of 12 color photographs depicts taxidermy as a way of unraveling the thin boundary between human beings and our animal counterparts. At once living and deceased, the animals photographed resonate themes of power, vulnerability, integrity and humiliation. Collectively, they make death seem like a living phenomenon to behold and apprehend.

Thalken’s mode of inquiry is tenacious and deep, and her choice of subject matter reflects this in complex layers at once phenomenological, primal and spiritual. Unlike much of conceptual photography today that prizes concept over impulse, Thalken’s images seem driven by a genuine search to prioritize what is deeply felt.

For the civilized world, the image of the animal has long served as a symbol for primal urges lurking just beneath the surface of human intention. While an unavoidable vantage point in interpretation of Eyes Open Slowly, the parallels drawn between human and animal read as more naturalistic than mythical or symbolic. They instead establish empathy between animal and viewer, placing both in the same category of the real — as oxygen-breathing species eager for survival.

Many of the animals exude a life-like presence, reminding you of the details of your own body: hair follicles, folds and tufts of skin, gaze. And this is Thalken’s point: that the continuum between animal and human is fluid and exchangeable. Humans aren’t merely animal-like in our deep instinctual urges. And animals are also human-like in the sophistication of their spirit and attention.

That most of the images are in portrait format, their verticality mirroring that of the viewer’s stature, emphasizes this feeling. The bristling tower of fur in Eyes Open Slowly #10, for example, reads like a hairy human torso buzzing with the vitality of life.

Many of the show’s photographs elicit the deep consciousness of animals, some captured as regal and self-aware, despite the awkward humiliation of their half-assembled bodies. In photograph #13, a small coyote stands alert on a cold concrete floor, its mouth and snout temporarily pinned in place. Its posture is erect, its gaze forever fixating on a point in an unknown dimension.

Even still, each photograph bears a heavy burden, as if the tradition of taxidermy is, in fact, born of an assumed claim of superiority over wildlife. In photograph Eyes Open Slowly #14, a blanket of animal skin crumples and folds in on itself like flesh of the elderly. Sprinkled atop its surface are staples and other industrial remnants, isolating it from the memory of its former function. The result is a feeling of combined intimacy and objectification. 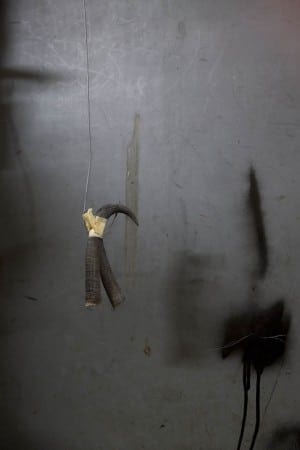 For those of us unaccustomed to the tradition of taxidermy, considering its enduring practice begs the question: what does it mean to immortalize a dead animal? Aside from the practicality of taxidermy — we wouldn’t otherwise be allowed such intimate experiences — the tradition bears resemblance to our own funerary practices in America and abroad. Taxidermists resurrect animals as a means of possessing nature, just as we make dead bodies palatable with makeup, as a way to possess immortality.

Eyes Open Slowly follows Thalken’s 2013 harrowing exhibition 1.2 cm = , which chronicles the artist’s battle with breast cancer (1.2 cm was the size of her tumor). Visual and conceptual parallels permeate this show, together positing a broader philosophical confrontation with mortality’s inescapability. The stuff of stitching the body — thread, sutures, tape, staples — is documented as both incidental detritus and the heart of the work.

One can’t help but draw comparisons to the manner in which Thalken’s body fell subject to similar reparations in the process of treating her illness. For example, #2 in Eyes Open Slowly shows a pair of severed antlers dangling from a metal wire, quite reminiscent of Haircut #1, in which Thalken photographed her own clasped hair similarly severed during cancer treatment.

A topic most people relegate to a convenient and distant abstraction, death and mortality as subject matter is courageous, admirable and rare. However, in a culture where we pay others to handle our dead so we don’t have to, perhaps Thalken’s willingness to confront such impossible content is also born of deep necessity to acknowledge what we prefer to ignore.

Thalken musters her own avenues for engaging with life cycles in ways that American culture has neglected. While addressing the inevitable with stark sobriety, Eyes Open Slowly reveals as well an eternality of spirit, its characters perpetuating luminosity beyond the ticking clock of their life span.