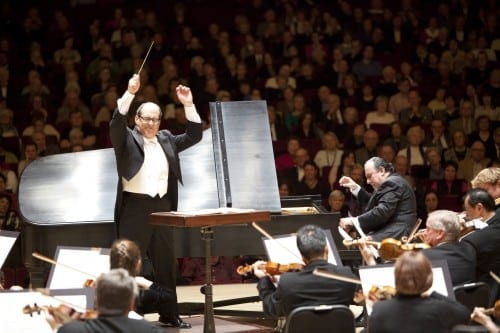 Review: With Spano at the helm, ASO and guest Yefim Bronfman find a radiant comfort zone Spano and Bronfman in 2011 at Symphony Hall. (Photo by Jeff Roffman)

On Thursday evening, the Atlanta Symphony Orchestra performed a concert of music by Sibelius, Beethoven and Rimsky-Korsakov, led by music director Robert Spano and featuring guest pianist Yefim Bronfman. The program will be repeated on Saturday at 7:30 p.m. at Symphony Hall.

This penultimate subscription program of the season opened with a piece the ASO was performing for the first time, “The Bard,” by Jean Sibelius. The music of Sibelius is one of Spano’s strengths and this eight-minute tone poem by the Finnish composer is a welcome addition to the ASO’s repertoire.

Although Sibelius himself did not offer a specific story behind the piece, it was most likely inspired by a poem of the same name by Johan Ludvig Runeberg. The poem itself tells of an aging minstrel, recalling his life and playing his harp for the last time before expiring.

A good clue is the work’s prominent harp part throughout, well-played by principal harpist Elisabeth Remy Johnson. The piece opens introspectively, the opening is sparsely scored, with the orchestra murmuring under the rather forthright harp part. It eventually builds to a fortissimo near the end, then retreats to a quiet close. It was a decent first go of it for the ASO, although a few more times before an audience will give it the degree of polish Spano normally obtains with Sibelius. Yefim Bronfman is quite familiar to Atlanta audiences. A recurring guest of the ASO, his most recent appearance with the orchestra was in January 2011, when he was soloist for Brahms’ Piano Concerto No. 2.

Then in 2013 he performed an eloquent solo recital for the 10th anniversary of Emory University’s Donna and Marvin Schwartz Center for Performing Arts. In this return appearance with the ASO, Bronfman was soloist for Beethoven’s Piano Concerto No. 4.

This particular concerto represents Beethoven at his most playful. It is music that will make tulips grow in your garden. Like the Sibelius work that opened the concert, it has its occasional broad and bold moments but is a work much sunnier by comparison. It is for the listener who loves the hand-work of chromatic scales and trills.

Although better known for the brawnier spectrum of piano repertoire, Bronfman made splendid work of this concerto. After multiple ovations, Bronfman came back to play an encore which was a great follow-up in terms of temperament and right-hand display: Chopin’s Etude in F major, Op. 10 No. 8, appropriately nicknamed “Sunshine.”

Nicolai Rimsky-Korsakov’s “Scheherazade,” which constituted the second half of the concert, is signature repertoire for the ASO. They last performed it on a subscription concert only two years ago, in January 2013, also with Spano at the helm. The ASO also recorded it, paired with the composer’s “Russian Easter Overture,” at the beginning of Spano’s tenure — his first recording with the orchestra.

It is a genuine “comfort zone” work for this pairing of conductor and orchestra, and did not fail to please. The work offered many featured moments for ASO principals, most prominently concertmaster David Coucheron, whose significant and beautifully rendered solo passages represented Scheherazade herself.

Thursday was also a day of breaking news for the ASO. The John F. Kennedy Center for the Performing Arts and Washington Performing Arts announced early in the afternoon that the Atlanta Symphony Orchestra will be one of four American orchestras to take part in their inaugural SHIFT Festival, which will take place March 28 through April 2, 2017 in Washington, D.C. The other engaged orchestras are the Boulder Philharmonic, the North Carolina Symphony and The Knights, a Brooklyn-based chamber orchestra.

The four ensembles will collectively offer up repertoire by nine living composers, including two world premieres during the festival, inspired by themes of nature, Americana, creation and creativity, and choral influences. For its part, the ASO forces will perform Christopher Theofanidis’ “Creation/Creator,” the theatrical oratorio that they premiered in Atlanta Symphony Hall last month to considerable success.

Each orchestra will also offer a residency program during the festival. According to the Kennedy Center’s press release, the ASO’s residency activities will be informed by the theme “Creation/Creator.” Word also comes that residency details will be negotiated over the next several months.