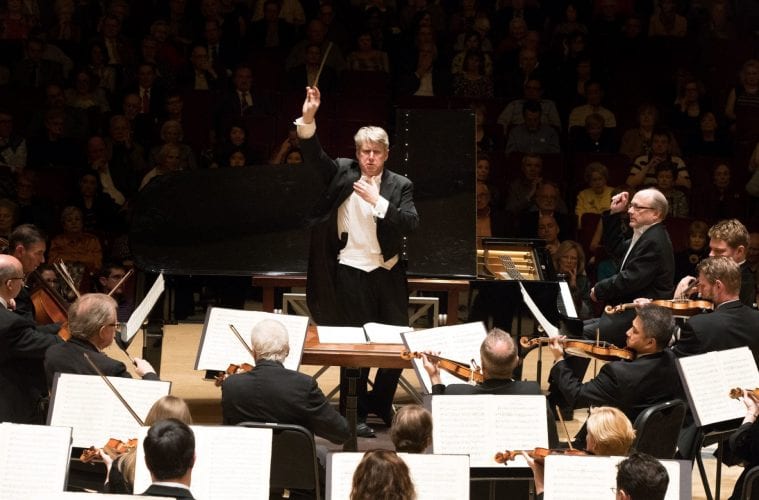 Review: Under conductor Michael Stern, ASO ramps it up for Tchaikovsky Symphony No. 4

On Thursday evening at Symphony Hall, the Atlanta Symphony Orchestra performed a concert of all-Russian music by Shostakovich, Medtner and Tchaikovsky, led by guest conductor Michael Stern with pianist Marc-André Hamelin as featured guest soloist. The program will be repeated in its entirety on Saturday night. The ASO will also perform one of its shorter, early-evening “Casual Fridays” concerts tonight at 6:30 p.m. without Hamelin, which will include only the orchestral works by Shostakovich and Tchaikovsky.

Conductor Michael Stern, who is the music director of the Kansas City Symphony and the founding artistic director of the IRIS Orchestra, opened the concert with a bona fide curtain-raiser: “Festive Overture” by Dmitri Shostakovich. Written in 1954, the brief, six-minute work has only been performed in ASO subscription concerts once before, in 1983, under the baton of the composer’s son, conductor Maxim Shostakovich. Nevertheless, it is a fairly well-known work in the U.S., if only due to being more frequently performed in an effective transcription for wind band by Donald Hunsberger.

“Festive Overture” lived up to its name in Thursday’s concert. The noble opening brass fanfares, in a broad triple meter, had the right pace and breadth, although the ensuing main body of the work felt a little too rushed, and some restraint of tempo on the part of Stern would have benefited the performance overall. Once the fanfares returned near the end, they were followed by a fast coda, which was taken at an appropriate clip that brought the energetic work to a rousingly celebrative conclusion.

Preeminent pianist Marc-André Hamelin had last been scheduled to perform with the ASO in May of 2013, but became indisposed at the last minute, replaced by Inon Barnatan who made his ASO debut in those concerts. Hamelin is known not only for his prodigious abilities but also for his courageous adventurousness as a performer.

Both attributes were on display in the unfamiliar work he brought to this week’s concerts: the Concerto for Piano and Orchestra No. 2 in C minor, Opus 50, by Nikolai Medtner, which Medtner started in 1926 and completed a year later. Medtner is hardly a household name, but his work has been championed by a handful of pianists in addition to Hamelin, including Earl Wild. After all, Medtner was himself reputed to be a fine pianist, though he chose to pursue his musical career as a composer rather than performer. He was a contemporary of composer-pianists Sergei Rachmaninoff and Alexander Scriabin, though a few years younger than either. There was certainly a reciprocal admiration between Medtner and Rachmaninoff, to whom Medtner’s Second Piano Concerto was dedicated.

This piano concerto’s quirky, syncopated opening in the solo piano part, a rhythm echoed immediately in the violins, was of itself interesting, even if it seemed like Stern and Hamelin were not entirely in sync throughout the performance. The piece itself felt mostly episodic, even clichéd at many points across its span — it is a curious musical work, which, while certainly of pianistic interest to the soloist, makes clear of its own accord why it doesn’t get programmed often. There are better vehicles in a similar vein that simply hang together in a more direct way.

Even so, Hamelin played it well, at his best and most natural in segments when playing unaccompanied or mostly so, such as the cadenza in the first movement, and thus most freely at home with his own muse. As an unfamiliar work, it felt like the orchestral part could have used a larger share of available rehearsal time; even so, the ASO musicians hung together well for the work’s duration. Hamelin did not play an encore.

The second half of the concert was devoted to a work of exceptional familiarity, Pyotr Ilyich Tchaikovsky’s Symphony No. 4 in F minor, Op. 36 — one of the essential works of late 19th-century orchestral repertoire. The ASO last played it in late March 2015 with music director Robert Spano conducting.

The symphony’s brooding “program” is perhaps overemphasized versus its purely musical qualities, but Tchaikovsky’s own overall heavy-toned description is emphasized by the opening “Fate” fanfare, which returns in the last movement as a kind of structural marker to help tie the whole 45-minute work together. The Scherzo that is the third movement, with its extensive pizzicato in the strings and more whimsical demeanor, offered up some welcome contrast. The finale restored the seriousness, concluding the emphatic final section that brought the entire piece to roaring closure.