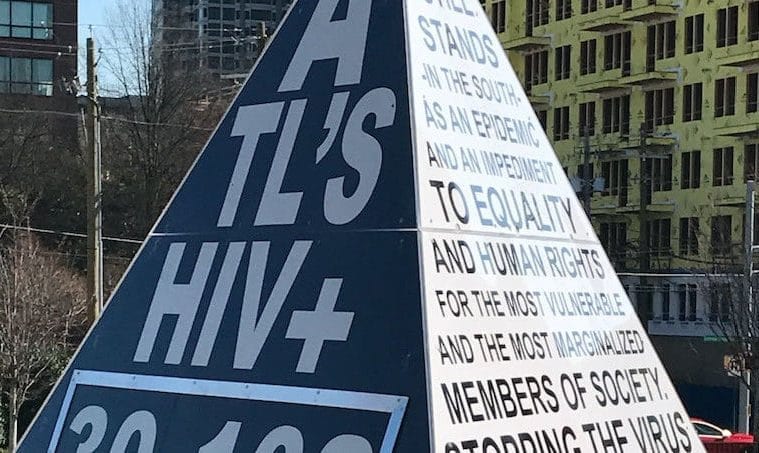 The hard truth about hard numbers: AIDS and the accountability of artists

“1,112 and Counting” is the title of famed activist Larry Kramer’s seminal 1983 essay in the New York Native, a strident, early call-to-arms that helped set the response to AIDS in motion. From the very beginning, it seems, the notion of counting, of confronting the public with the shocking numbers of those affected by the virus has been one of the central thrusts of activism in response to HIV and AIDS.

“I was very intrigued by the hard numbers,” says Atlanta artist and writer Matthew Terrell, whose new temporary public work, Atlanta’s HIV-Positive Population Now, follows in a long tradition by displaying an updating count of the city’s increasing HIV-positive population at the National Center for Civil and Human Rights in downtown Atlanta.

Terrell says he first started to look into the disturbing data that shows Atlanta as one of the cities still most affected by increasing rates of HIV infection about a year ago after writing about the Zuckerman Museum of Art’s exhibition Art AIDS America for this publication. “When I saw the tens of thousands of people in the Atlanta area, I wondered how I could express the magnitude of that,” he says. “I was driving along Piedmont, and I noticed the Atlanta Population Now sign across from Piedmont Hospital. It hit me: all you need is just a counter.” 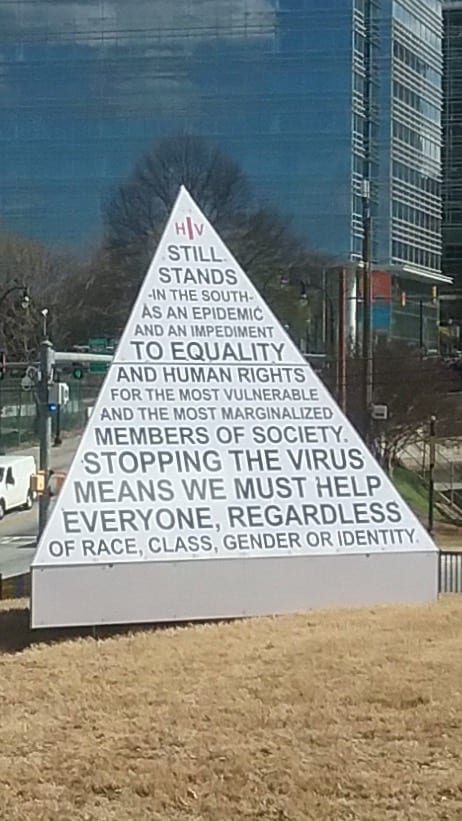 Terrell took the idea to several arts-funding organizations in Atlanta before finally connecting with the LA-based AIDS Healthcare Foundation, which immediately said yes. AHF had an existing relationship with Atlanta’s Center for Civil and Human Rights, and in fact had already been looking for ways to integrate some public programming related to HIV at the Center.

Terrell’s original idea was for a flat digital display, but that had to be modified for the site. “The building itself is a piece of art,” he says. “I didn’t want to insert something of my own on there.” He instead opted for a pyramidal marquee display in a very visible, unactivated area on the property’s street-facing lawn.

“It makes it a better project because I get to come out here and talk to people,” says Terrell, who changes the number, increasing the count — now well above 30,000 — by 28 at the end of every week. “A lot of people have said they didn’t realize this was still an issue. A lot of people ask why is this still an issue . . . It’s a staggering, intimidating number. It’s confrontational. It’s provocative. I wanted people to have a moment of pause, a moment of reflection, when they see that number. There are a lot of people who pass by here every day or work nearby who are going to see the number go up and up.”

Terrell says the project’s ultimate placement at the Center is fitting; in spite of better medications and a better understanding of the virus in recent years, HIV remains a human rights issue. “If we have young people who aren’t receiving comprehensive sex education, they don’t know about their bodies, and they don’t know how to keep themselves safe,” he says. “And we have large populations that aren’t getting regular healthcare. If you’re not going to the doctor, you’re not detecting HIV early on and it spreads more. Access to education and access to healthcare are human rights issues.”

Still, not everyone thinks the counter is the best way to go about raising awareness. Terrell’s project has been criticized by some for being stigmatizing to people who are HIV-positive, even for fear-mongering. A scathing editorial signed “Zaida J.” on the Atlanta-based website Wussy took Terrell to task for his project. “Terrell’s piece is laced with the erasure of black queer men, who lie at the center of newly increasing HIV incidence rates,” the author argues. “To reduce this population to a faceless number while ignoring their entire narrative is not only insulting, it is racist. If we consider that the increasing number of HIV cases are predominantly black queer men, then tabulating their growing numbers does little to shed light on Atlanta’s HIV rate, but it does illuminate Terrell and AHF’s disregard for black people within the context of public health.”

In a post dated February 16, Atlanta artist Emily Getsay invited Facebook users “appalled” by the project to respond in protest by photographing themselves holding a number between 1 and 31,000, a counter-piece entitled “More Than a Number” meant to show the human side and identities of those affected by HIV rather than “just a number.”

“HIV/AIDS in Atlanta is not an easy conversation, but it is a conversation that should be discussed in a non-stigmatizing way,” says Getsay, who will announce a venue and exhibition date for the still-in-progress project soon. The call for submissions will be open until March 11. “Terrell’s piece has created a one-sided view,” she says. “HIV/AIDS in Atlanta should be seen through the eyes and perspective of people actually living with HIV/AIDS.”

“I think it’s fantastic,” says Terrell about the counter-piece. “It really plays into the vision of my work which is about sparking conversations. They’re doing the hard work and heavy lifting. Showing the human side and showing the data side are just two different ways to communicate. I praise them for that.”

Still, Terrell strongly objects to the notion that his work is stigmatizing. “Stigma against HIV-positive people is a very real thing,” he says. “Stigma is being told you’re no longer allowed in your home or your church because you’re HIV-positive. Stigma is being a hairdresser who, when he reveals his HIV status, the client is afraid to have a haircut. Those are real examples of stigma. This is a number. I worry that young people are watering down what stigma is.”

Though viewers may disagree about the message, Terrell says he’s glad the sign has sparked conversations and even controversy. “My goal with the piece is to reach people who have perhaps forgotten that HIV is still an issue,” he says. “The conversation about HIV is predominantly in a very small community. But there’s a huge community that could effect positive change: leaders, doctors, lawyers, business people. That’s who I want to reach. I want all of Atlanta to realize this is still an issue. It’s still literally an epidemic here, and we all must contribute to ending the virus. I want people to think about how they can make that rate decrease. I think we definitely have the ability to get to an increase rate of ‘zero’ in Atlanta.”

“Atlanta’s HIV-Positive Population Now” by Matt Terrell will be on display outside Atlanta’s Center for Civil and Human Rights through June 27, 2017. Terrell changes the number and is available to answer questions about the piece every Friday at noon.

For more information about the counter-project, “More Than a Number,” contact Emily Getsay at getsay.emily@gmail.com.