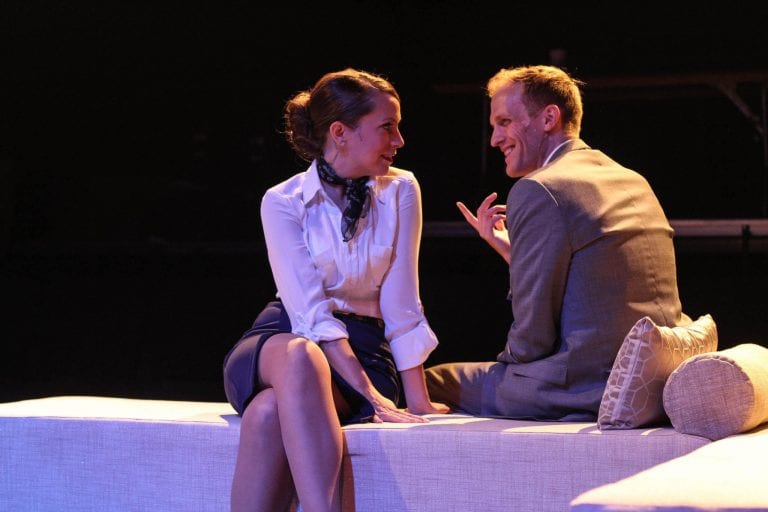 Review: Company showcases Whittemore but fails to cohesively come together

It’s been a summer full of big musicals in Atlanta, and now one of the city’s most beloved theaters, Actor’s Express, has just rolled out its production of Stephen Sondheim and George Furth’s 1970 hit Company, a concept show about a set of New York marriages. Directed by Freddie Ashley, it runs through September 11. ArtsATL critics Andrew Alexander and Jim Farmer were there on opening night and had this to say about the production.

Jim Farmer: Howdy, Andrew! It’s been an unexpectedly busy summer for theater. Now Actor’s Express has just opened its new season with Company, We both saw it Saturday. What did you think?

Andrew Alexander: I had high expectations for this one, and in many ways they were met. Sondheim, Actors’ Express, Company, a great ensemble cast led by Libby Whittemore. All good stuff. But in some ways, I was left a little meh. I’ll try to ponder why in a sec, but I’m super-curious. What’d you make of it?

Farmer: I didn’t dislike it. In fact, I thought there were some great moments. But overall, I found it somewhat drab. I thought the ensemble was excellent, and three or four numbers really impressed me. Libby Whittemore didn’t disappoint me either, but Company is a hard musical to pull off and this version felt mediocre. You were telling me earlier that this is the first time you’ve seen a production?

Alexander: Yes. I’m familiar with the show through the cast album and there was a documentary about the making of, but this is the first time I’ve been lucky enough to see the show in full. I think one of the things I got hung up on was that I found Bobby’s existential crisis unconvincing. His plight (if that’s the right word) was ultimately sympathetic (though there’s a “first world problems” aspect here), but somehow even beyond that, I never got the sense that he could ever possibly be a real person. Without that, the show is a bunch of interesting vignettes, some great songs beautifully done, but it never comes together as something with a big unified emotional impact the way a musical should. Does that make sense? Did you have a similar take?

Farmer: I have seen the show many times, including the last version of it at Express 15 years ago and the 2006 Broadway revival, where I sat and literally swooned at actor Raúl Esparza. Bobby has always been a hard character to crack — and I understand. I commend any actor trying to take on the role. Lowrey Brown plays Bobby here and has a fine voice, but when he’s not singing, I found the character devoid of personality. He may be going through an existential crisis but he’s not a ghost. To me, he was the least interesting person onstage. What cast members captivated you?

Alexander: Lots of folks had a nice moment, which is exactly what you want in an ensemble show like this. But especially memorable for me was Jessica Miesel’s take on Amy. Her performance of that famous patter thing was nice, but even better was just her general approach and embodiment of that character. Very funny. The women in the cast were very impressive here across the board, I’d say. You?

Farmer: Miesel was funny, yes, and I always enjoy Laura Floyd (as Jenny). But for me, Libby Whittemore just schooled everyone else. Her character’s “The Ladies Who Lunch” can be done really over the top but her take was restrained and powerful. I wish the rest of the show had that intensity. I also enjoyed the ensemble’s “Side by Side by Side/What Would We Do Without You?” I must say, though, that “Another Hundred People” is one of my favorite numbers in the piece and Jimmica Collins’ rushed-through version was a huge disappointment.

Alexander: Collins did seem to have a rough time, opening night jitters probably. I was surprised by how angry Whittemore’s Joanne was on the show’s most famous number, “The Ladies Who Lunch.” There’s anger, resentment and bitterness to that song, sure, but it seemingly works best for singers when that’s more palpably mixed with other things. Ensemble pieces were lovely, you’re right, but I ended up feeling that a lot of them were clearly written and designed for the proscenium stage. It’s a case where being closer to the performers doesn’t make things more intimate, just more jumbled. Audiences are hard to read, opening night audiences even more so, but did you get a take on people’s reaction? I thought it kind of telling that almost all of the conversation one overheard in the lobby was about that damned helicopter.

Farmer: Ouch, Andrew! It’s a valid point. Actor’s Express has always had a special place in my heart. The Harvey Milk Show was the first Atlanta production I ever saw, and for a while Actor’s Express produced musicals better than anyone else in town. Sadly, though, that’s just not the case anymore. During the same time that Aurora Theatre and Theatrical Outfit have been combining for major productions, when Brian Clowdus of Serenbe Playhouse is landing a helicopter and bringing in Broadway performers, and when Atlanta Lyric Theatre, the Alliance Theatre and Horizon Theatre are staging terrific musicals, Actor’s Express has underwhelmed with three consecutive musicals now, all of which — for me — have suffered from key casting issues. I do hope they can return to form soon. What are your final thoughts here?

Alexander: I think I’ve been happier at AE lately than you’ve been. The theater is in typically good form here, and I actually root the decision to go all intimate, human and Sondheim when everyone else is going off-the-rails Gigantor. But somehow, even so, this one didn’t come together as something to fall in love with and marry, and that’s what I wanted.

Farmer: No ceremony for me either! Parts of this entertained me, but, yeah, I wanted more, too. I will pin my hopes on the company’s Little Shop of Horrors next summer. Let’s hope that one makes us more giddy.