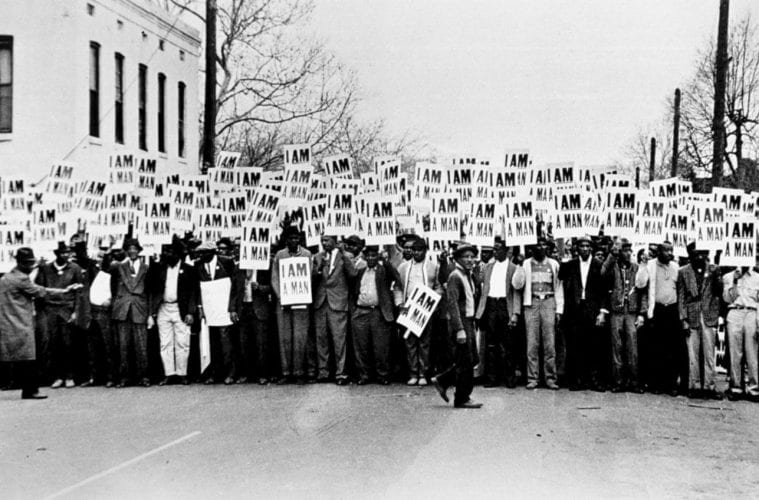 Review: Civil Rights photos at the High convey the fire of resistance, past and present

“You can kill a man, but not an idea.”
–Benazir Bhutto

There is something inherent in the human spirit that pushes back against the word “no.” When Martin Luther King, Jr., was assassinated outside of his room at the Lorraine Motel in Memphis, Tennessee, a groundswell against the word “no” occurred in communities across the country. Riots and fires broke out in black neighborhoods as people had nowhere to place their anger, and many of those areas in Pittsburgh, Detroit, Baltimore and other cities were never revived after April 4, 1968. However, many of King’s supporters refused to let a man — who for them represented hope, equality and freedom — die in vain. The Poor People’s March on Washington that he had been planning with the Southern Christian Leadership Conference (SCLC) occurred on May 12, 1968.

Now, in his native Atlanta, the High Museum exhibition, “A Fire That No Water Could Put Out”: Civil Rights Photography, features 43 photos that reflect on the events in 1968 leading up to, during and following the King assassination. The exhibition, on view through May 27, 2018, takes its title from a line in King’s “I’ve Been to the Mountaintop” speech, the last he gave before his death. The exhibition begins with images taken between 1957 and 1967, starting with Parks’ iconic photo, Outside Looking In, showing black children in Mobile, Alabama, looking through a metal fence into a whites-only playground. The section on 1968 focuses on the days, weeks and months after King’s assassination. One particularly haunting image is Steve Schapiro’s Dr. Martin Luther King’s Motel Room After He Was Shot, which is a photo of the television in King’s room airing the news of a reporter telling the world that he was killed. The transition between past and present is an image taken by Dawoud Bey in 2014, Mary Parker and Caela Cowan, that shows, sitting in a church pew, a girl the same age as the little girls killed in the Birmingham 16th Street Baptist Church bombing, and also an older woman the age the girls would have been had they lived. The viscerality of this image is certainly heightened by incidents like the Emanuel A.M.E. Church shooting in Charleston in 2015 and the Sutherland Springs Baptist Church shooting earlier this month. In the contemporary section are photos from current protests, including a selection from Pree Bright’s #1960Now collection. One features a sea of protesters sitting down under an overcast sky on the ground in downtown Atlanta with hands raised. Another is from a protest in Baltimore after the death of Freddie Gray that shows hands of many colors outstretched over a crowd. The most captivating part of the exhibition is not necessarily the focus on King, but the focus on women in the movement. Women have been involved in the struggle for civil rights from the beginning — from Sojourner Truth and Harriet Tubman to Angela Davis and Alicia Garza. Women organized marches, rode buses, boycotted, sat in, walked and marched. They started Black Lives Matter to save the lives of black men, and subsequently future generations of black people. They are too often reduced to being pretty faces in the background, big bosoms to cry on and no names. By featuring photos of women on the frontlines of marches and signing people up for literacy classes, the exhibition grants recognition to this often forgotten force in the fight for freedom.

All of the photos featured are full of historical lessons, some beautiful, others haunting. The main idea that it drives at is that though the United States has come a long way in the journey toward equality, there is still a long way to go. The difference between 1968 and today is that one person’s death does not radically alter the world the way it once did. The fire after Trayvon, Michael, Jordan, Freddie, Eric, Tamir, Philando and countless others is not rising as quickly as the flood of new bodies. But as long as there is some fire, a resistance to the word “no,” perhaps the fury of hashtags can become the fervor that creates meaningful legislation.

The High Museum will present a conversation between photographers Doris Derby and Sheila Pree Bright moderated by Spelman College President Mary Schmidt Campbell, Ph.D., on December 1 at 7:30 p.m. in the Hill Auditorium. The exhibition runs through May 27, 2018.