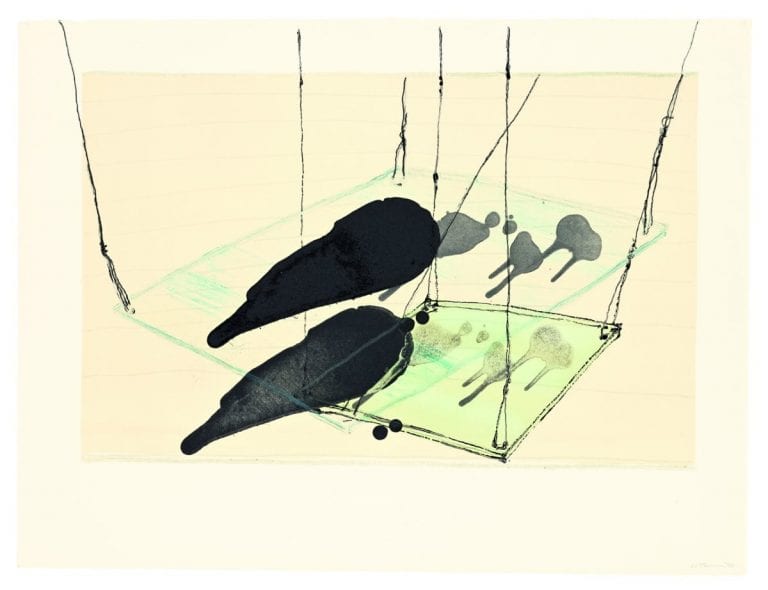 Review: Al Taylor’s work at the High reveals the humor and spirituality of an unsung artist

Making the acquaintance of an undersung artist is always a pleasure. Viewers now have that opportunity at the High Museum, where Al Taylor, What Are You Looking At? runs through March 18. Curated by the High’s Michael Rooks, the 20-year survey occupying the Anne Cox Chambers Wing comprises drawings, prints and the three-dimensional works Taylor preferred to call “drawing instruments.” It is the first major survey of the late artist’s work in the United States, and the largest to date.

Born in Kansas City in 1948, Taylor spent most of his career in New York in the thick of the ’70s art scene, where, among other jobs, he was Robert Rauschenberg’s studio assistant from 1975 to 1982. A spin through the galleries offers glimpses of that era’s zeitgeist, whether through touches of Rauschenberg’s mix of everyday materials, Brice Marden’s loopy line, Richard Tuttle’s modest ad hoc sculptures or the Minimalist interest in systems.

Taylor, who died at the age of 51 in 1999, absorbed it all without falling in thrall of any one artist or ideology. He was more focused on the art of paying attention. Aware, he said, of “the invisible energy in everything,” Taylor chose mundane objects as subject matter and material — hula hoops, broomsticks, coffee cans, inner tubes and construction pipes — things we barely notice, let alone value. The Common (Hawaiian Household) Objects, a suite of prints made after falling in love with Hawaii during trips there in 1987 and 1988, contains such images as a mosquito coil and dust motes visible in the light coming through a vent.

The artist played with his imagery across mediums, which Rooks emphasizes by organizing the show thematically. Take the painted black inner tube hanging on the second floor like a mysterious space ship. Taylor’s interest in seeing had led him to imagine an x-ray of the tube, indicated by ghostly white lines on its circumference. Hung on an adjacent wall are prints and drawings of the same, transmuted into compelling abstract forms through his formal skills. An exemplary printmaker, Taylor employed multiple techniques to achieve rich surfaces and tonalities. Animated by a slightly quavery line, the drawings benefit from his experimental nature, for instance, the use of copy-machine toner, which yields an intense black.

Taylor was not just alive to the world; he was endlessly curious about it. He liked to follow “I wonder” wherever it took him. Notions of time, motion and perception ramble through his work. More often than not, however, his investigations were clothed in the absurd. Pet Stain Removal Device (1989), an invented contraption that ostensibly lifts dog pee off the ground, defies gravity and common sense. A series of Plexiglas panels, each swabbed with a blotch of paint like a lab sample, fans upward as if achieving urine lift-off. Supported by spindly bamboo poles, held together with electrical tape and wire, the piece barely defies gravity itself.

Viewers might be reminded of Marcel Duchamp’s The Bride Stripped Bare by Her Bachelors, Even (The Large Glass) (1923), one of numerous art historical references in the show. The photographic motion studies of Eadweard Muybridge and French scientist Etienne Jules Marey (to whom he dedicated a piece) might be more germane. Taylor must have felt an affinity for their merging of science and art, though he usually undercut — or hid — seriousness with his art- and science-deflating humor.

Yet, as critic Christopher Bedford noted, the work is imbued with a “sneaky profundity.” Look again at the scintillating light in Ventilated Ceiling, the print in the suite of household objects. Couldn’t “the invisible energy in things” have a spiritual as well as a scientific connotation?

Taylor had an enthusiastic following in Europe, less so in the United States. Why? Is it that his work eludes easy categorization? Is it that the art world doesn’t reward printmaking and drawing? John Yau took a darker view, writing in 2015, “I think the art world just doesn’t want to deal with Taylor’s deadpan humor, because it reveals its foibles, pretentiousness and chest-thumping histrionics.”

The momentum around Taylor’s work is building now, with blue-chip gallery representation and museum exhibitions, and it’s nice to see the High Museum right there at the front of the pack. Greatest-hits shows by revered artists certainly have their place, but the time has come for the High to be making, rather than retelling, art history. By paying, and drawing, overdue attention to this idiosyncratic artist, Al Taylor, What Are You Looking At? achieves that goal.