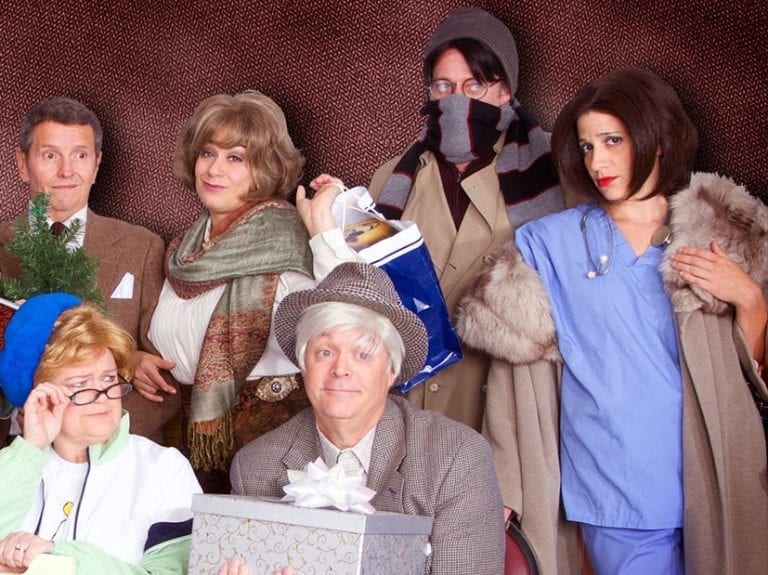 Review: Christmas and family get the Topher Payne treatment in “Let Nothing You Dismay”

Kevin (Ben Silver) and Allie (Emily Sams) are in a hospital waiting room on Christmas Day quietly awaiting the birth of their soon-to-be-adopted son. They want nothing more than to spend a calm and restful Christmas together alone as a couple, happily savoring the holiday and the anticipatory moment. As you can probably guess, however, Kevin and Allie’s vision of a quiet Christmas is not to be.

In Atlanta playwright Topher Payne’s world premiere comedy Let Nothing You Dismay, at Stage Door Players through December 20, the family arrives, and they arrive in droves of noisy, idiosyncratic, weirdly meddlesome and embarrassing relatives.

Most new plays nowadays, due to reasons of budgetary concerns and shortened audience attention spans, are limited to five characters and one act. There’s a lot an inventive playwright can do with those contemporary limitations, but frequent theater-goers can nonetheless start to see and feel those as frustrating constraints. What’s gratifying and fun about Payne’s play is that he kicks so jovially against those limitations, creating a many-peopled, two-act show with a cast of eight actors.

The small but mighty cast, including the actors playing the lead characters Kevin and Allie, double (and in many cases triple) up and play a huge cast of 23 characters, the odd assortment of family weirdos and loudmouths that descend on the hospital waiting room.

It’s a perfect arrangement for Payne, whose light touch in the script makes the complicated maneuverings impressively smooth. The viewer is conscious of the quick changes, of course, but there’s also a convincingness and ease to the trick, which is crucial to its success.

Overall, there’s a sweetness and gentleness to the play about family togetherness, which ends up as something of a hindrance. It’s a light Christmas comedy after all, so some gentleness is to be expected. But the family members whom Kevin and Ally are taking such pains to avoid can seem not truly toxic and meddlesome, just idiosyncratic and boisterous and often attractively so.

Part of the problem is that the whole thing seems designed not to give offense to anyone. While some characters pop vividly to life — I especially admired Shelly McCook as the shrewd and practical nun Aunt Noreen — others remain dull or aren’t given enough to do.

Even the plot’s central difficulty, that the birth mother Lizzie is having second thoughts about the adoption, seems mild and piffling. The character just seems wishy-washy, not emotionally torn in an interesting, threatening or resonantly funny way. And since she’s played by the same actress who plays the adoptive mother, the two can never meet for dialogue that might have brought some more enlightening comic shades to the state of affairs.

Overall, the situations are inventive and interesting, but they never become wild, chaotic and dizzying, which seems to be the aim, and it’s indeed where a farce should take us.

In the end, it’s a Christmas show, so saying that the thing could use more claws and barbs is perhaps a little unfair. The tinsel sparkles on cue, the cast is wonderfully adept and the quips are fast, funny and smart.

I would have preferred a comedy about a family that’s a little nastier, tougher and more genuinely mean-spirited, but when everything else is done so well, I won’t let it me dismay.