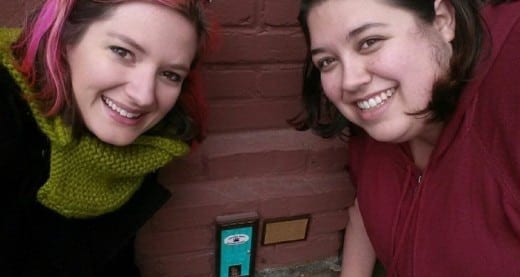 Wyatt gets a kick out of this Tiny Door on the Atlanta BeltLine. (Photo by Brandon Barr)

If you have ever taken a youngster to an amusement park, a Pixar film or any parade featuring cartoon characters reimagined as supersized balloons – you’ve probably noticed how grownups are as inclined as kids to revel in attractions that are tailor-made for children’s sensibilities.

Which explains why Atlantans of all ages are crouching, stooping and getting down on all fours to take a closer look at Tiny Doors ATL, a series of miniature public art installations that debuted in July 2014. When co-creators Karen Anderson and Sarah Meng installed the first tiny door on a pillar of the Krog Street Tunnel, they did not have a specific demographic in mind. They simply wanted to foster a sense of wonder in people of all ages. But given the canvas they selected, where impermanence is the only constant along a vibrant corridor favored by some of the city’s most prolific graffiti artists, Anderson and Meng feared their contribution might be ignored, abused or painted over.

Instead, Reynoldstown embraced the gesture and started returning the tiny favor in kind. First, a very small doggie bag from The Flying Biscuit appeared on the door’s front porch. Next, a tiny Atlanta Journal-Constitution was left on the stoop. And within days of Halloween, a Lilliputian jack-o-lantern materialized.

Six additional doors have surfaced since then (click here for a location map), and the tradition of impromptu offerings continues around town. Visitors have stashed flowers, figurines and cash behind Tree Door, #5, which is the only entryway that features a working fixture. The original Tiny Door, in the Krog Street Tunnel.

Anderson, a social media strategist, resisted creating any social media platforms for the installations until last winter, preferring to see what might emerge organically. But this did not discourage a word-of-mouth campaign that went viral before spreading on Twitter, Pinterest and Facebook.

Adeline Garrett, a visual arts major at Savannah Arts Academy, first learned about the project via Instagram a year ago, and was smitten. The miniatures reminded the 18-year-old of idyllic summers spent wandering the woods in Highlands, North Carolina, with her grandmother, affectionately known as Teddy.

“Teddy used to point out tiny holes in tree trunks,” recalls Garrett, “and tell me that’s where fairies lived. I would imagine those portals opening up to a whole other world… and could clearly visualize all the rooms inside the tree.”

When Anderson hears this story, she exclaims “Yesssss! That is so awesome!” It’s a word she uses often, and with gusto.

Following her move to Atlanta in 2013, Anderson, who was raised in Ann Arbor, Michigan, says she was captivated by the connectivity of the city’s “big, giant, beautiful art scene… from Living Walls to the Atlanta BeltLine,” and eager to take part in the conversation.

A chance meeting with Meng, an Atlanta native and mental health counselor, inspired Anderson to recreate the Fairy Doors of her hometown, and imbue them with the distinctly “urban, neighborhood pride” she recognized in Atlanta.

“Honestly,” laughs Meng, “I had no idea what Karen was talking about, but I’d worked on other street art projects and I believe in art as powerful site of resilience, so I said ‘Yes!’”

Like Garrett, Meng says her grandmother, a museum docent, encouraged her granddaughter’s curiosity, imagination and attention to the tiniest details from an early age. The lessons have proved invaluable in her practice as a therapist, where she says seemingly small moments can have big and lasting impacts. Likewise, as an artist, she sees the potential for the Tiny Doors to reward passers-by when they least expect it.

“I want their moment of walking by to be interrupted… for something to happen that shifts the feeling and makes somebody laugh, or experience an unexpected moment of surprise,” she says. Tiny Door #6 is on the Atlanta BeltLine near Paris on Ponce.

Free access to all – whether traveling on foot, in a wheelchair or stroller –  is the only hard and fast rule. With the exception of an occasional pop-up door, all seven Tiny Doors are permanent, and Door #8 in Cabbagetown will open with a reception on December 19. Anderson and Meng decline requests for private commissions because that would privatize the art work. Twice a year, however, they donate doors to charity auctions, giving them an opportunity to work with delicate materials like real glass and wood.

Such materials would never survive the wear and tear of the real world, so they cast all the doors from a mold using a tinted resin mix. Once the doors are painted and assembled, Anderson and Meg install them using cement, caulk, or other adhesives depending on the setting. Though fragile-looking, the doors, built on a 1:12 scale, are durable and weather-proof.

Ten to 15 hours a week are devoted to maintaining the doors and their tiny roofs, stoops, kick plates, window boxes, door knobs, mailboxes and (in the case of Door #3 at Inman Park Pet Works) a doggie door to make the facades look like they are lived-in and loved. As well, landscapes reflect the local terrain The Tree Door is moving to Oakland Cemetery.

A small group of volunteers (email knockknock@tinydoorsatl.com to request an application form) and self-appointed guardians work year-round to keep things in tip-top condition, but vandalism has taken a serious toll on two of the doors.

In the meantime, steps have been taken to mitigate the problem. Pedestrians are encouraged to approach Meng and Anderson (whose Schiaparelli pink hair makes her stand out in a crowd) on the street, or contact them via their website to report any foul play or damage to the doors. After some deliberation, it was recently decided to relocate the Tree Door (#5). Atlantans were asked to suggest a perfect tree for Door #5 on Instagram, and Oakland Cemetery responded within a day saying, “We’d love to have y’all!” Anderson and Meng accepted the invitation. It will be installed early in 2016.

Anderson’s small steps have also ignited a giant leap for her career when TED Talk organizers asked her to give a lecture at Emory University in two months, titled “The Beauty of Things Unseen.”