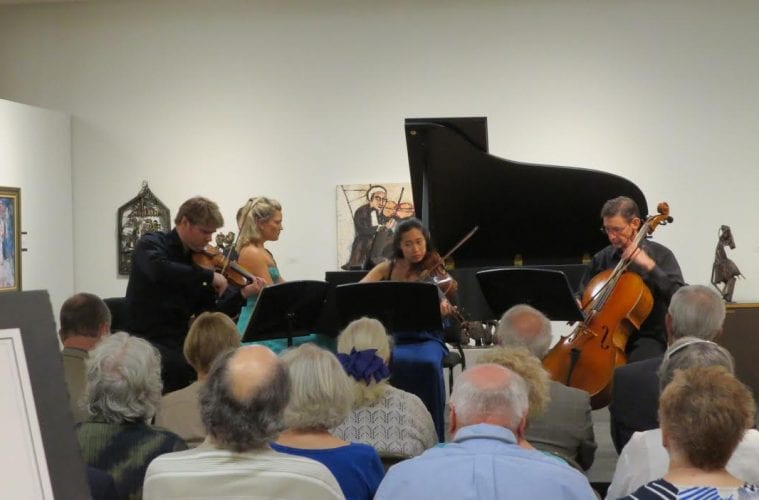 On Saturday afternoon, the Christiania Quartet performed music by Mozart, Korngold, Bériot, Halvorsen and Schumann at the Steffen Thomas Museum of Art in Buckhead, Georgia, under the auspices of the Madison Chamber Music Festival, which continues through June 10.

The Steffen Thomas Museum is 67 miles from Atlanta’s Midtown, a little over an hour drive via I-20, about seven miles southeast of Madison in Morgan County. Even then, the museum itself isn’t located in the town, but on the other side of the expressway, in the midst of extensive farmland with ample, grassy fields dappled with rolls of browning hay and couple-colored Holstein cows. You could easily miss the museum’s unpretentious building on Bethany Road were you to blink while driving past.

Yet there it is. Why such an art museum is there at all, despite strong connections to Midtown Atlanta, is its own intriguing story — which we will get to.

The Christiania Piano Quartet is an Atlanta-based ensemble, being the members of the Christiania Trio – violinist David Coucheron, cellist Christopher Rex and pianist Julie Coucheron – plus violinist/violist Julianne Lee, who joined the Atlanta Symphony Orchestra this season as principal second violin. That Lee is accomplished on both violin and viola made this particular program possible with four players. It’s a program essentially identical to the one the quartet played in February at the Amelia Island Chamber Music Festival in Fernandina Beach. Rex is artistic director of both the Amelia Island Festival and the Madison Chamber Music Festival, which makes such symbiotic programming an easy and effective choice.

The first half of the program compared works by two child prodigies of different eras: Wolfgang Amadeus Mozart and Erich Korngold. In both works, there is an emphasis on the role played by the piano.

In the first of these, Mozart’s Piano Quartet in G minor, K 478, written in 1785, the piano is utilized as a solo instrument, as accompaniment to the strings, in unison with them and as an antiphonal voice in opposition to them. The piece offers up a lot of variety in a work that the composer’s contemporaries considered too complex for amateurs but brilliant in the hands of skilled professionals. Intended for the light-touched Viennese forte-piano of Mozart’s day, its display of rapid scales and finger work, especially in the right hand, is nonetheless efficacious on a modern piano, as demonstrated by Julie Coucheron’s playing.

Lee then switched from viola to violin for three movements from Erich Korngold’s Suite for Two Violins, Cello and Piano Left Hand, one of the composer’s prewar works, composed in 1930. The suite was commissioned by the famous one-armed pianist Paul Wittgenstein; thus, as with the Mozart Quartet, the piano part plays a central role, although most emphatically in the first movement, which includes a cadenza for the pianist, which was not included in this performance. (Only two movements were featured in the Amelia Island performance, so this seems the Christianias are in the midst of developing the complete Suite, movement by movement, for a place in their repertoire.)

The remaining three movements were also shuffled from their original order, which made good sense in this context: first came a waltz of Viennese character that hinted at Mahler but with a transparency. That was followed by a Lied, its melody derived from an earlier song by the composer, “Was du mir bist,” on a poem by Eleonore van der Straaten — also redolent of Mahler. The last in the set, marked Groteske, was an energetic, but dark-hued, rhythmically driven scherzo.

After intermission, Lee and David Coucheron returned to the stage to play some showy violin duos by Charles Auguste de Bériot and Johan Halvorsen. Up first was the opening “Moderato” movement from Bériot Duo Concertante No. 1, in G minor — a piece of about seven minutes’ duration in which the considerable demands on the two violinists are subordinate to delivering the work’s elegance and charm.

More interesting was Halvorsen’s Concert Caprice on Norwegian Melodies, a work which displays a great variety in technique, bowing and sonic color. Its opening leads to a brief theme and variations, followed by a lively, rustic Halling (hallingdans) — a quick, acrobatic folk dance of rural Norway in which a vital “fiddling” character was the dominant — before the work’s emphatic finale.

The entire quartet returned, with Lee switching back to viola, to conclude the concert with Robert Schumann’s popular Piano Quartet in E-flat major, Op. 47, to round out this concert of truly satisfying performances.

At best-known count, Saturday’s concert was the sixth that the Madison-Morgan Chamber Music Festival has presented at the Steffen Thomas Museum of Art over the last decade. The museum itself opened in 1997, devoted to the work of Steffen Thomas (1906–1990), a German-American artist who settled in Midtown Atlanta and is best known for his public art — notably the Trilon sculpture (1950) at the corner of 15th Street and Peachtree Street on the Colony Square corner of the intersection, in the center of a fountain, in which the artist’s use of negative space plays a vital role in its design. There are also six more classically oriented sculptures by Thomas in the Georgia State Capitol, including a statue of former Georgia governor and US senator Herman Talmadge.

When Steffen Thomas passed away in 1990, his widow wanted to turn their Midtown properties, home and artists studio into a museum to preserve and display his artwork, but architectural issues, city codes and zoning issues made that impossible. One of their children happened to own an expanse of farmland near the town of Buckhead and encouraged his mother to put the museum out there. That’s how the Steffen Thomas Museum of Art wound up where it is instead of in Atlanta, a very nice day trip to escape the city to see a great variety of art in a range of various media by an artist whose role in Atlanta’s visual arts scene was significant, if perhaps overlooked in this still-new century.

A final connection with the music: After the concert, cellist Chris Rex, himself also a visual artist, took me to the musicians’ ready room to point out a smaller sculpture ensconced there. “It’s not exactly the same,” said Rex, of the small sculpture that was a kind of Mini-Me of the Trilon at 15th and Peachtree, but their similarity was instantly obvious. It served as one more tangible piece of evidence of the umbilical cord between the works preserved in this architecturally innocuous, climate-controlled museum, built in a rural, pastoral setting; something Atlanta should have had within its legal borders but in the end did not.

Younger Atlanta artists are encouraged to take the trip out to see a unique instance of the arts heritage of the city, state and southeast region. One could easily sum up the good feeling of the geo-aesthetic influences with a quote from Steffen Thomas about himself: “Welsh by ancestry, German by birth, American by adoption, and a Southerner by choice.”