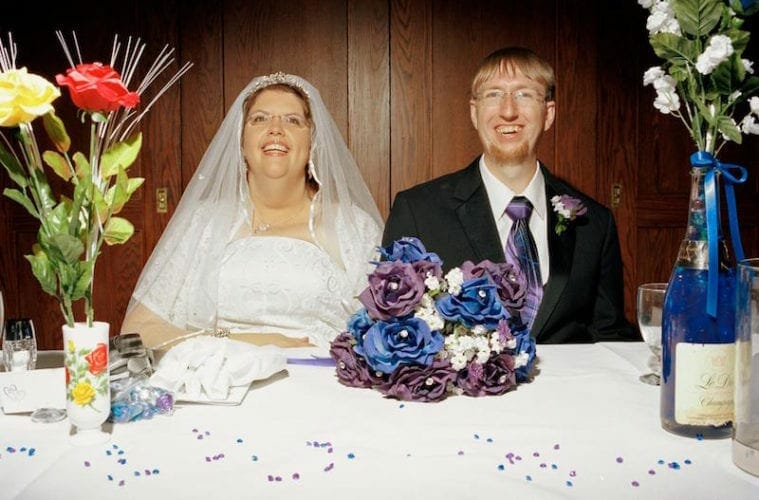 "Heidi's Wedding" (2019). The images in documentary photographer Chris Verene's "Home Movies" focus on his hometown of Galesburg, Illinois, and were shot with a medium-format camera.

The title Home Movies evokes the magic of nostalgia and the raw reality of American life in Chris Verene’s small exhibition at Marcia Wood Gallery (through October 12). The Brooklyn-based documentary photographer, a regular on the Little Five Points/Cabbagetown music and art scene in the 1980s, presents the intimate and universal through his decades-long photography project. Each of the 12 images on view here is singularly impactful. Together they tell a story about the hopes and failures of the American dream. Chris Verene, now 49 and a professor at CUNY-Staten Island, was a regular on the Little Five Points/Cabbagetown music and art scene in the 1980s.

A little background: Verene, now 49, is a musician, a performance artist and a professor at CUNY College of Staten Island, as well as a conceptual and documentary photographer. He has an undergraduate degree from Emory University and an M.F.A. in studio art/photography from Georgia State University. He cofounded the band Dairy Queen Empire, aka DQE, in Atlanta in 1986 and the rockabilly Rock*A*Teens with Merge Records in 1994. His return to Atlanta comes via a collection of truly arresting photos with a sincere vision of home.

Verene’s ongoing series began in 1986 in the 16-year-old photographer’s hometown of Galesburg, Illinois, where three generations of family on his mother’s side reside. Using a medium-format camera, Verene took photos of family and friends in the intimate moments of everyday as well as such milestones as weddings and graduations.

He began shooting film in 2009 and is at work on an ongoing film project, also titled Home Movies. In the film, the voices of his subjects are heard and their emotions seen for the first time. An episodic documentary premiered in 2014 in New York. The full-length 2019 installment will premiere October 10 at the Landmark Midtown Art Cinema in collaboration with Atlanta Celebrates Photography. A panel discussion follows.

What makes Verene’s work fascinating may also be what makes it off-putting. There’s a voyeuristic honesty in the images. This opens space for relatability as well as secondhand embarrassment and the fear of being seen. We may not all know what it’s like to live in a small Midwestern town — Galesburg has 32,000 people — but Verene’s images catch an essence of life recognizable from any family’s photo albums. The smile held too long, the children running out of focus and the heavy eyes of exhaustion are all here, snapped without pretense. The camera’s gaze holds each subject lovingly, shifting from playful observer to dutiful archivist bent on conveying humanity.

Verene uses objects and home settings to paint fuller portraits of his cousins, siblings, pals and parents, allowing us to know them better and to connect. In some you’ll see fake flowers, American flags, trailer homes and worn La-Z-Boys. In others you may find less agreeable objects — Confederate flags, bullets and the stuff of messes. In Nico and Mercedes, for example, two children in costumes play around a phone booth. The booth, standing like a proud relic, represents the timelessness of the photos.

Verene’s work has taken place over three decades, so be careful not to get lost in the years as you cross from one image to another. The paneled walls in Heidi’s Wedding, an image featuring Verene’s cousin, appear dated, but the photo was taken in 2019. With the markers of modernity subdued, generations of people can see their lives reflected back at them. The gallery exhibit shows a 19-minute excerpt from the Home Movies film. Its nonlinear, episodic structure reveals the larger issues at play in these people’s lives, including job insecurity, home instability and generational poverty. The economic crash of 2008, mental illness and drug addiction are all discussed matter-of-factly.

One such scene depicts three generations of a family outside a convenience store. The mother, grandmother and son — having just received their monthly Women, Infants and Children check — sit in the car and scratch lottery tickets. Verene tracks them as they come up empty on the scratch-offs, go back inside for more and scratch again, thus revealing the hope and hopelessness of gambling.

Verene is still working on his Home Movies project and still travels from New York to Galesburg to follow his extended family and friends from infancy to adulthood. The beauty of his photos lies just as much in the image as in the trust built year after year between subject and photographer.