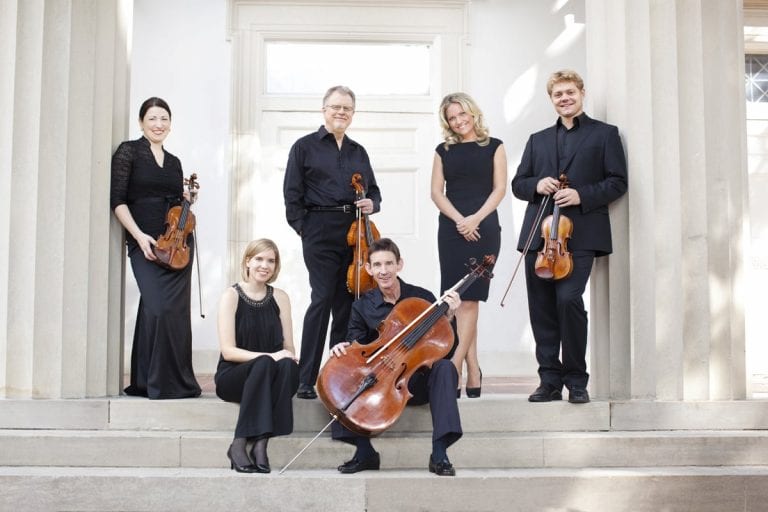 Today, we conclude our three-part look at the 2019–20 season in classical music with a focus on Atlanta’s bustling chamber and vocal ensemble groups, along with the “new music” scene.

In earlier stories, we looked at the upcoming Atlanta Symphony Orchestra season and then The Atlanta Opera, Spivey Hall and programs offered by local universities.

From the Atlanta Gay Men’s Chorus to the Peachtree String Quartet to neoPhonia New Music Ensemble, fans of classical music have plenty to be excited about for the coming year.

— Under the direction of violinist Julie Andrijeski, the Atlanta Baroque Orchestra is the only Baroque chamber ensemble in the Southeast. The orchestra is the ensemble-in-residence at the Cathedral of St. Philip in Buckhead. A Baroque-style orchestra plays on period instruments, giving modern audiences a different sound universe that composers may have heard in the 1700s. The orchestra performs J. S. Bach’s Magnificat and Third Orchestral Suite at the Cathedral of St. Philip on October 11 and at St. David’s Episcopal Church in Roswell on October 12.

— Kinnara is a top-flight vocal ensemble that includes singers from around the country who come together to produce a rich, lush sound. Its multimedia, five-person performance of David Lang’s Pulitzer-Prize winning work, The Little Match Girl Passion, on November 15–16 should be inspiring. The venue is the Mint at the Met, a nonprofit art space full of galleries, offices and studios that has presented the work of more than 1,000 artists. This extraordinary event will be free, with any donations directed to the Atlanta Children’s Shelter.

In 2020, Kinnara will present a program of the Baltics, Scandinavia and Iceland called “Northern Glow.” On January 17–19, including venues such as Northside United Methodist Church, the program will feature some lesser-known composers such as the Finnish composer Einojuhani Rautavaara, one of the most notable composers from that country since Jean Sibelius and a composer who trained with such notables as Aaron Copland in New York City.

The Atlanta Chamber Players, founded in 1976, advocates for contemporary composers as well as lesser-known classics. Directed by pianist Elizabeth Pridgen, its season opens on October 13 at Peachtree Road United Methodist Church with performances of works by Clara Schumann, Robert Schumann’s wife but also an accomplished composer in her own right. A clarinet trio by local composer Tommy Joe Anderson rounds out the evening.

— Founded in 1981, the Atlanta Gay Men’s Chorus has been dedicated since its inception to expanding bridges between people. Directed by Donald Milton III, the chorus is well known for Broadway tunes and December holiday concerts. Its season kicks off on October 5 with “This Is Me — Free Pride Performance,” a program dedicated to freedom for all people, at the Church at Ponce and Highland. Tickets are free but must be reserved. You can also catch its holiday concert at the Cathedral of St. Philip in Buckhead December 6–7.

— Founded in 1975 and directed by Paige Mathis, the Atlanta Young Singers will present their 44th-annual holiday concert at the Immaculate Heart of Mary Catholic Church on December 14 and 21. For those who are not aware, the Atlanta Young Singers have an important role in fostering singing in the Atlanta area: they have several training choirs locally, and two performance choirs: one for grades 6–9 and the other for grades 9–12.

In the spring of 2020, they will put on two exciting events: a “Journey of Freedom” dedicated to themes of freedom and social justice (March 22 and 24 at the Church at Ponce and Highland), and “Discovery,” a program devoted to exploration and scientific thought (May 11 at the First Baptist Church of Decatur).

— Directed and conducted by John Dickson, Coro Vocati is a semiprofessional chamber choir with innovative programming and consistently high standards of singing and artistry. CV initiated its 2019–20 season with “Can You Hear Me?,” exploring the theme of giving voice to the powerless, on September 28–29. Catch a globally minded holiday program on December 14 at Smoke Rise Baptist Church in Stone Mountain and on December 15 at All Saints’ Episcopal Church on Peachtree Street.

— The Georgian Chamber Players draws performers from the ASO, especially stars such as violinist David Coucheron and cellist Christopher Rex, along with pianist Julie Coucheron. In the past, they have collaborated with eminent musicians such as the pianist Emanuel Ax. Their concerts take place on convenient Sunday afternoons. The season opener is November 3 at Peachtree Presbyterian Church in Buckhead, inside the acoustically vibrant Kellett Chapel.

Another ensemble drawing players from the ASO, the Peachtree String Quartet includes violinists Christopher Pulgram (also the director) and Sissi Yuqing Zhang, violist Yang-Yoon Kim and cellist Thomas Carpenter. Its programming in 2019–20 blends classical stalwarts such as the Beethoven Quartets with contemporary works by composers such as the Estonian Arvo Pärt, whose works draw inspiration from Gregorian chant while achieving his own avant-garde sound. You can catch the Peachtree String Quartet at the Garden Hills Recreation Center on October 6, January 12 and March 15. These concerts will include surveys of Beethoven’s String Quartets from all three style periods but with representatives of each style during each concert.

After surviving the demise of Sonic Generator in 2015, Atlanta’s new-music scene has regrouped over the last few years. At present, it is tied most closely with the Georgia State University School of Music and with the two artistic directors of the SoundNOW festival — Nickitas Demos, the coordinator of composition at Georgia State, and Caleb Herron, artistic director of Chamber Cartel, one of Atlanta’s premier new-music ensembles. The SoundNOW festival, the new epicenter of this activity, is coming upon its fifth year, occurring April 7–14.

— neoPhonia New Music Ensemble will perform on April 6 at Georgia State’s Kopleff Recital Hall. neoPhonia was founded in 1996 by Demos and includes musicians from within the university and in the broader community.

— Bent Frequency is another group that will have a strong presence at SoundNOW. It is Georgia State’s ensemble-in-residence, but more than neoPhonia, it aims to transcend the limitations of the concert hall with avant-garde contemporary works. We may also expect music from the BF Duo Project, a spinoff of Bent Frequency. Duo Project, founded in 2014, combines the talents of the percussionist Stuart Gerber and saxophonist Jan Berry Baker. We hope it adds to its accumulated total of 20 commissions to date from composers.

— Atlanta Contemporary Ensemble, directed by Tracy Woodard, has issued a 2020 call for scores for the SoundNOW festival. This call is for small mixed ensemble pieces of about three to five minutes each, scored for modern dancers, chamber instruments and trap set. In the style of Pictures at an Exhibition, it is asking for works inspired by the paintings of Atlanta artist Krista M. Jones, who goes by “Jonesy.”

Terminus Ensemble is another group we can expect at SoundNOW. Founded in 2011, it is based in Powder Springs with the goal to produce avant-garde music that is composed and performed locally. Sarah Hersh and Brent Milam are artistic directors.

— The Chamber Cartel uses flexible instrumentation. It has given Atlanta premieres of a number of avant-garde works, such as Erik Satie’s Vexations (1893–94), which features a short theme in the bass that is accompanied sometimes in upper voices and then repeated 840 times in succession.

— Duet for Theremin and Lap Steel Guitar is a deliciously avant-garde, ambient production that will sooth and hypnotize the listener. Scott Burland is on theremin, and Frank Schultz is on guitar. You can hear the duo on October 12 at Porchfest in Decatur and on November 23 at Cloud Recordings Festival in Athens.