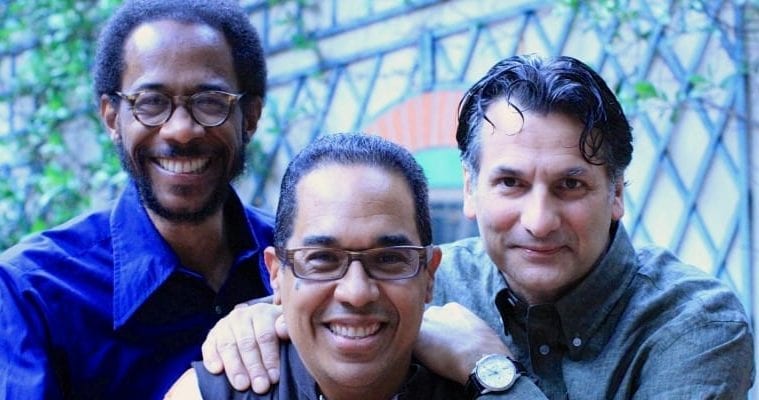 Children of the Light break out of Wayne Shorter’s shadow.

During a concert by the Children of the Light on Saturday at Clayton State University, pianist Danilo Pérez said the trio — which includes drummer Brian Blade and John Patitucci on acoustic and electric bass — will head to the studio this spring for its first recording sessions.

The musicians have been playing as a unit for 15-odd years supporting Wayne Shorter, most recently on 2013’s Without A Net live recording, but this new disc would present the trio as a cohesive ensemble. Last year at the Rialto, the musicians had already proven their relationship with Shorter isn’t at all subordinate; during the enthralling performance, Pérez, Patitucci and Blade weren’t simply accompanying a music master, but were participating in an organic, collaborative music-making process.

Pérez, Patitucci and Blade easily move in lockstep. This familiarity and appreciation of common musical goals helped create a level of jazz club intimacy even in Clayton State’s Spivey Hall.

The group has only recorded one studio album with Shorter, 2003’s Algeria, though together they have logged countless hours of live shows and three live recordings. But capturing in the studio the spontaneity and the electricity the three musicians unleashed at Spivey would seem to be a difficult task.

Saturday’s concert, without the headlining presence of Shorter, was a bit more subdued, and the band was able to craft its own identity. Pérez’s aesthetic — at times classical and florid, with one graceful, curving line flowing into the next — led to pieces full of twists and turns, each of them introducing myriad changes in direction and mood. Pérez juxtaposed his buttery, pianistic passages with rhythmic ostinatos; when the music demanded it, he even played clustered jumbles of notes with his forearms and fists.

The tunes, for the most part, swapped melody for shifting vamps, and here is where Shorter’s influence became most apparent. The conceit lended a spontaneous feel to the evening — an almost jam-like presentation — that gave an unexpectedness to the tunes that is missing in a lot of modern jazz played today.

The musicians are master technicians, but flashy playing was refreshingly absent from the performance. Electric bass in hand, Patitucci could have imbued each song with a prog-ish fusion vibe, but he expertly interlaced dizzying passages of notes with a deep respect for the music. Even his keep-the-tempo background playing on acoustic bass added depth and brilliance to the music.

On the drums, Blade’s driving goal was not rhythm, but musicality; his use of dynamics and subtle shading belied the sheer amount of sound he could create. Blade doesn’t seem like an overly physical drummer, but early in the evening, a somewhat faulty snare drum stand couldn’t bear the quiet force of his drumming. Blade handled the equipment malfunction in stride, never losing a beat, even with his snare drum resting on the stage.

Patitucci delivered the most poignant tune of the evening, picking up his electric bass for “Ballad for a Nobleman.” With the song, he said a subdued but joyful good-bye to the late Atlanta Symphony Orchestra bassist Doug Sommer, a longtime friend. The touching tribute rejected mawkish sentimentality for captivating musicality, echoing the overarching theme of the evening.