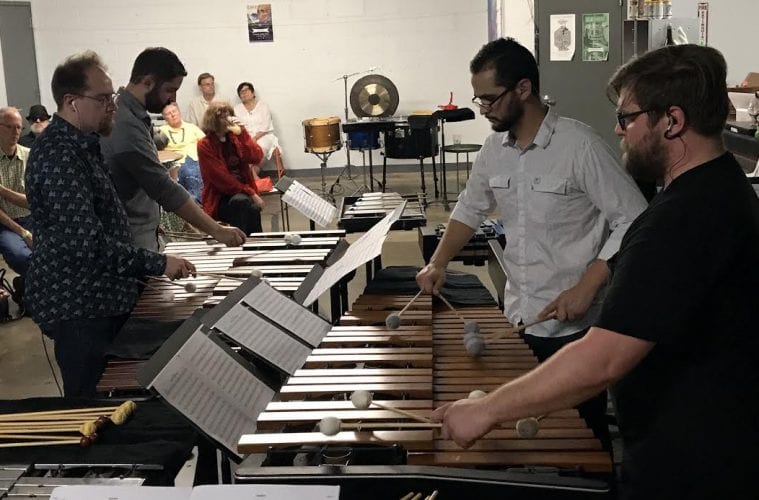 The concert was the second in Chamber Cartel’s “Don’t Look Back: Beyond the Zero” series of six concerts presented by Orpheus Brewing that continues through October.

The performance space itself at Orpheus Brewing is plain, unassuming light industrial with basic warehouse-type fluorescent illumination. The rectangular gray room has a sufficiently high ceiling for this kind of music, and it is resonant. The anticipation was the music would at times be loud enough that each attendee was given a pair of brought orange foam earplugs upon entry. That proved a reasonable expectation.

Although Atlanta audiences had just experienced three full concerts of Adams’ works earlier in the month, part of his brief residency at Georgia State University, Chamber Cartel had long been poised to give the city yet a fourth April encounter with the Pulitzer Prize-winning composer’s music.

Written between 1991 and 1997, “Strange and Sacred Noise” is a cycle of six distinct pieces (or movements) for percussion quartet with a total duration of about 75 minutes. Each features a different class of percussion instrument: snare drums, tam-tams, tom-toms and bass drums, mechanical sirens and mallet instruments, with a return to snare drums for the final number. Some of the movements also bear a dedication to composers that have influenced Adams.

In this performance, the four percussionists were stationed at the four corners of the room for the most part, allowing for a quadraphonic immersive experience — the exception being one movement when the mallet percussion was employed, with those instruments clustered together nearer the center of the room but close to one of the longer walls.

The work opened with “…dust into dust…” for snare drums. Thunderous, incessant 16th notes pummeled the ears from the outset, occasionally interspersed with grumbling rolls and contrasting patterns, with abrupt long spaces of silence in the latter part — the interactions became increasingly interesting as it went on.

The musicians turned to tom-toms and bass drums for “velocities crossing in phase space” (dedicated to Conlon Nancarrow and Peter Garland) in which accelerating and decelerating drumming patterns in the four parts wove an interesting tapestry of independently shifting velocities.

The most curious section was the fourth, “triad iteration lattices” (dedicated to Edgar Varése and Alvin Lucier) for no other reason perhaps than the fact hand-cranked sirens are not percussion instruments per se, but they are the kind of sound-making devices percussionists are often called upon to play anyway when unusual instruments are demanded. The music involves a similar game in terms of acceleration and deceleration, except the result of cranking the sirens faster produces change in pitch and relative volume. Some surprises of the movement included the effect of “chordal glissandi,” where the wailing sirens all changed pitch in a similar direction; even two accelerating together, the pitch rising in the same direction, especially at the same rate, was attention-getting.

The mallet percussion were then featured in “clusters on a quadrilateral grid” (dedicated to Morton Feldman), which started off with warm woody sounds of marimbas, moved to the metallic bite of vibraphones and glockenspiels, and finally back to marimbas. Rolling clusters on marimbas produced bands of vibrant sonic color, the way combining different colors of tiny dots on a canvas can be more vibrant than a single “pure” paint pigment. Long spaces cropped up in a similar manner to those in the first movement. Loud clusters on the high-pitched glockenspiels at times produced the phenomenon of phantom “difference tones” that hummed almost melodically far below the instruments’ actual range.

The musicians returned to their snare drums for the final section, “…and dust rising…” Although starting off more quietly this time, it involved a reworked reprise of the materials from the opening movement, bringing the work full circle with an emphatic conclusion to a thoroughly visceral performance.