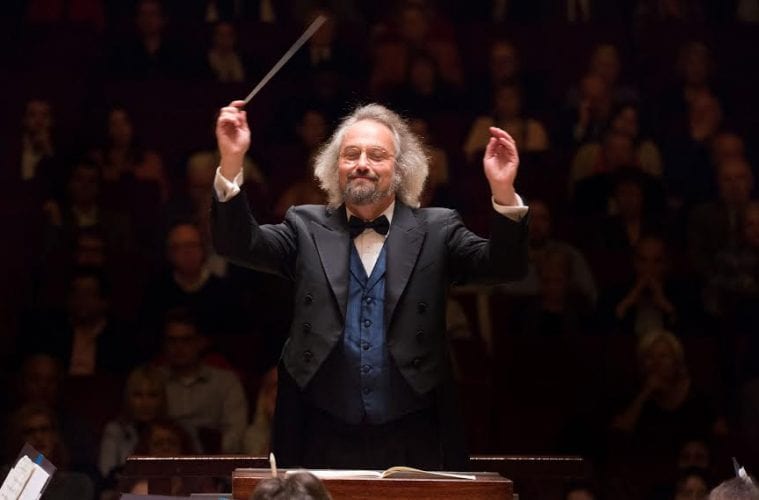 Born in Uruguay to Austrian parents, Kalmar is now in his 13th season as music director of the Oregon Symphony, with which he made his New York debut at Carnegie Hall in 2011 as part of that venue’s inaugural Spring for Music festival.

Kalmar and the ASO opened the concert with the Poet and Peasant Overture (1846) by Franz von Suppé. Surprisingly, it was the first time the ASO had performed the overture on a subscription concert, despite a long history of being programmed as light-classical fare in orchestral pops concerts.

It begins with a soft but noble fanfare-ish chorale in the large brass section that quickly grows loud, followed by a hushed response in the strings’ low-registers, then it rises again to full orchestra. About a minute into this slow introductory, an extended lyrical part for solo cello emerged, beautifully played by principal cellist Christopher Rex. An aggressive syncopated Allegro theme ensues, followed by a more wistful waltz. These moods go back-and-forth exchange between the two. In the end, of course, it’s the more boisterous music that pushes ahead full-force to a barn-burning close.

Next up, Russian pianist Yevgeny Sudbin, who now lives in London, took the stage as soloist for Ludwig van Beethoven’s Concerto No. 1 for Piano and Orchestra in C major, Opus 15. It is my least favorite of Beethoven’s piano concertos but even so, I can admit the choice in this instance was at the very least pragmatic.

Sudbin is in the midst of a project to record all five of Beethoven’s piano concertos with conductor Osmo Vänskä and the Minnesota Orchestra. They recorded Nos. 4 and 5 on a disc that was released in 2010; then No. 3 along with a Mozart concerto, released in 2013, leaving Nos. 1 and 2 to record and complete the set.

On December 17 and 18, Sudbin will perform No. 1 again in Espoo, Finland with Vänskä and the Tapiola Sinfonietta. Then in January, Sudbin will join forces with Vänskä again, this time with the Minnesota Orchestra for a “Beethoven Marathon” of concerts that will include all five of Beethoven’s piano concertos as well as all nine Symphonies.

Unlike his playing in the recordings of Beethoven’s last three concertos, at the outset of the first movement in Thursday’s performance of No. 1, Sudbin seemed curiously restrained by the music. He played with a score laid flat on the piano’s pin block and frame. At the end of the movement’s development, he chose to play the infamously troublesome octave-wide double glissando for the right hand as a pair of scales with two hands instead — not an unheard-of solution.

Then came the cadenza, which is where Sudbin’s musicality suddenly opened up like sunlight breaking through the clouds. Rather than any of the commonly used cadenzas, Sudbin created his own and stepped forward stylistically with a romantic to modern temperament beyond the confines of the work’s late if transitional classicism.

At a few different moments the cadenza hinted at jazz, which was engaging and vibrant and showed more of the inspired musician Sudbin actually is. From there, through the careful lyricism of the second movement and the playfully-spirited Rondo finale, Sudbin’s performance fared much better overall. Excepting the cadenza, it seems still a work in development, not so much under Sudbin’s hands as still in his head.

After intermission, Kalmar led the orchestra in a transcribed work: the Piano Quartet No. 1 in G minor, Opus 25, by Johannes Brahms, as orchestrated by Arnold Schoenberg in 1937, at the instigation of conductor Otto Klemperer for the Los Angeles Philharmonic.

Much of it does feel true to Brahms, whom Schoenberg greatly admired. Some parts just sounded odd, even if attractive, like occasional use of a xylophone — which seemed more like Dmitry Kabalevsky than Brahms. It was, nonetheless, a refreshing insight into the music of one musical master by another.