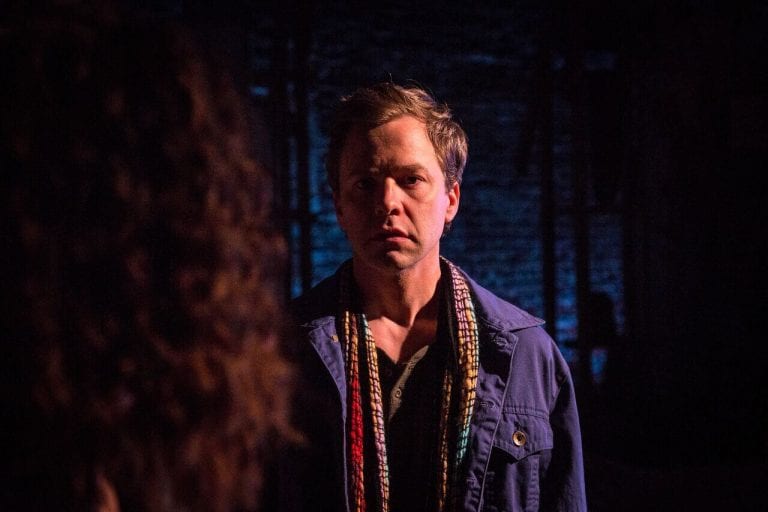 The parents in Boy, playwright Anna Ziegler’s 2016 drama currently getting its first Atlanta production at Theatrical Outfit through October 15, face a terrible decision. Their newborn son’s genitalia are mutilated during a medical circumcision, and they can either choose to raise him as an incomplete, genderless boy, or, with the help of a renowned, benevolent doctor, they can opt for further surgery and raise their son as a girl. They choose the second option, hoping at least that it might be less awful than the first.

Moving back and forth in time, the play dramatizes events and scenes from the life of its main character Adam (Clifton Guterman), called Samantha as a child. The unusual story closely parallels that of the real-life person David Peter Reimer, who was raised as a girl but who always felt male and ultimately chose to live as a man.

It’s hard to put my finger on why — the writing is fine, the cast is splendid, the situations dramatic — but I wasn’t profoundly moved by Samantha/Adam’s story as it unfolded on stage. We know from the opening that it’s to be a sad and difficult path, an especially painful one, we discover, because everyone involved has the best intentions.

Ziegler lays out some compelling scenes — the best of them center on a series of psychological therapy sessions between the kind doctor (Tom Key) and the child-patient (also Guterman) across the years of development — but what the story seems to lack threaded throughout is perspective, a true, cosmically compelling reason for the tale to be told.

As it is, there’s something voyeuristic, maybe even a little sadistic, in watching so much of someone’s misery unfold on stage in a naturalistic, almost documentary style. Some would argue that this story isn’t really Ziegler’s tale to tell, no matter how admirable her intentions, and although I’m not usually partial to that line of argument, I could begin to see the sense of it. Dutifully and respectfully approaching these long-suffering people with the intent of evoking sympathy for their situation certainly doesn’t sound like a terrible project, but for the audience, with the playwright on tippy-toe, things can play out as an excruciating propitiation.

Adam’s story may be singular, but Boy is a play that wisely aims its sights on universal themes: the drive for independence and self-definition, becoming an adult, choosing one’s own path. These are modern, progressive ideals, but the ultimate, overarching theme of the story is deeply, almost dourly conservative. Boy illustrates an instance when gender proved immutable.

Here, nature wins, and the doctor arguing the importance of nurture is not only proven to be wrong, but worse: his warm, benevolent heart is shown to have an icy sliver of coldly objectifying intellect deep inside of it. It’s also worth pointing out that although the story is unusual, even unique, none of these thematic threads seem fresh, interesting or exciting in the play.

Either way, purpose and perspective seem withheld until the very end. And they come in the form of a poem written by another author, quoted line-for-line by one of the characters: it almost seems like a form of cribbing from someone else’s paper. I did find the ending moving, but it’s a long wait for those last two minutes.