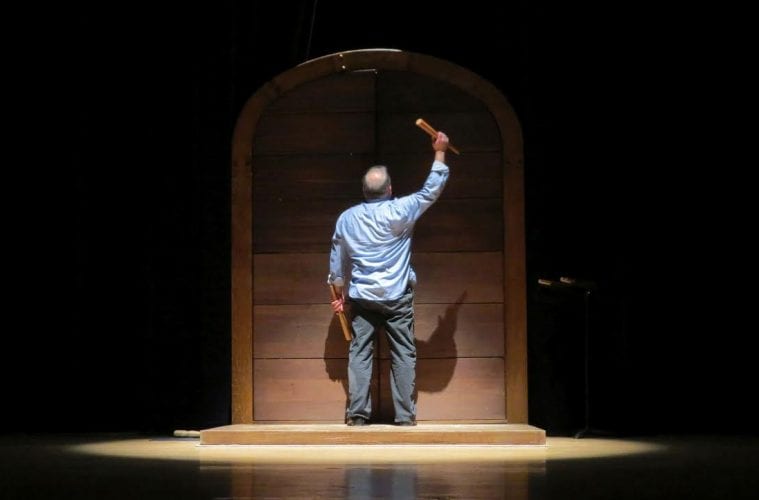 The concert’s title, Eine kline KLANGmusik, refers (with the obvious nod to Mozart) to the fact that all three pieces on the program are parts of Karlheinz Stockhausen’s final epic work, “KLANG: Die 24 Stunden des Tages” (“SOUND: the 24 Hours of the Day”), which was left unfinished at his death in December 2007. Stockhausen’s plan was to compose a movement to represent each hour of the day, but he completed only 21 of the intended 24 movements.

The concert opened with “Edentia” for soprano saxophone and electronic music. Written in 2007, it represents the 20th hour in the cycle. Saxophonist Jan Berry Baker performed the work with Joe Drew’s sound projections of the electronic component, which were drawn from layers 4, 5 and 6 of Stockhausen’s 24-layer electronic work, “Cosmic Pulses,” which was on the docket to be the program’s final work.

The title “Edentia” comes from The Urantia Book, an eccentrically unorthodox spiritual and philosophical tome, where it is the name of a planet. The sections of the work are articulated with Stockhausen’s own texts, heard within the mix of electronic elements, which in the beginning describe the planet Edentia and then musical devices employed in the latter sections (i.e., trills, tremolo, repetition).

Baker’s amplified soprano sax wove its way through the sonic tapestry, often in hanging long tones, sometimes featuring pitch-bending to the point of slow, smearing glissandi across short pitch intervals — a display of the performer’s linear control and patience versus the acrobatics of velocity.

“Himmels-Tür” (“Heaven’s Door”), the fourth hour from KLANG, was composed in 2005 for Stuart Gerber, who performed the world premiere at the Rossini Theater in Lugo, Italy, then the North American premiere in June 2007 at the Spoleto Festival. It was Stockhausen’s last solo percussion piece, written for a specially built giant wooden door. There are actually two of these doors, both of which are built with six pairs of panels or fields, which can be struck. The one that Gerber used in the world premiere resides in Europe; the door Gerber played in Tuesday’s concert was built for the North American premiere and is used for all performances on this continent.

Composed for a solo percussionist plus a little girl in a supernumerary role at the end, “Himmels-Tür” is as much a theater piece as it is a musical one. To that end, the choice of a custom-built instrument as a door is significant. Throughout history, doors have possessed great symbolic power, often ritualistic, as an archetype — a fundamental motif of human experience — as a portal of passage, whether granted or denied, that represents a portent of change.

The idea for the work came to Stockhausen in a dream, in which he encountered the gates of heaven locked against him. It is a musical and physical tour de force for Gerber as percussionist-protagonist, whose myriad efforts to gain passage seem to no avail. He beats the doors with wooden mallets and stomps the floor with his shoes, exhibiting a wire range of emotions in his various entreaties, until the doors swing open on their own power. After a moment of silence, he cautiously steps through into the radiant light behind, and disappears, at which point begins a tumultuous clamor of tam-tams, cymbals and sirens. During this sonic melee behind-the-scenes, the little girl (portrayed by Gerber’s own daughter, Ella) approaches and ascends the stage from the audience, passing through the doors without effort, before the crashing and wailing music winds down.

“Himmels-Tür” is credibly Gerber’s signature piece, and this virtuosic performance proved a thrilling, captivating example of just why that is so.

After intermission, the all-electronic “Cosmic Pulses” concluded the program, its performance executed by sound projectionist Joe Drew, who directed and performed in the American premiere of the complete KLANG cycle in 2016 at the Metropolitan Museum of Art in New York City.

Most easily described in the vernacular as “trippy music,” its 24 layers of sound, spatially deployed over an array of eight channels through speaker systems positioned throughout Kopleff Hall, are entirely synthesized and totally absent of any digital sampling. Where you sat in the hall largely determined your personal experience of the piece. As there was no live performer to watch, rather than just having the audience listen in the darkened hall, a nominal light show accompanied the music, rendered with the hall’s admittedly limited theatrical lighting capabilities. Perhaps it was a visual aid for the attention span of some folk, but it really was not aesthetically necessary.