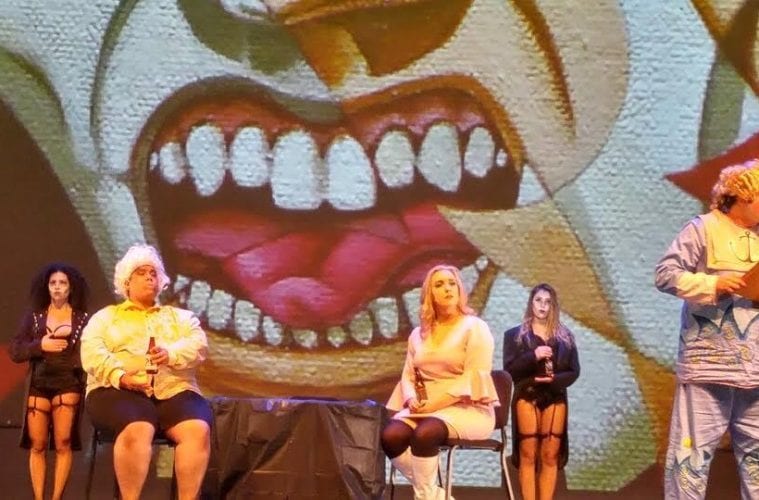 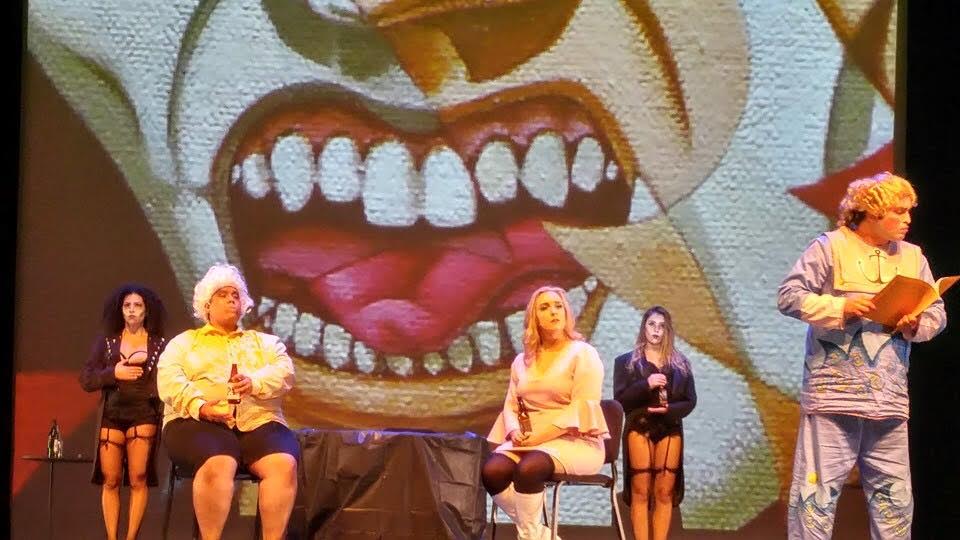 This past Thursday and Friday, new music ensemble Bent Frequency and Houston-based PromoMusica International presented a performance of the opera “DeCachetitoRaspado” (“Cheek to Stubbled Cheek”) by Mexican composer Juan Trigos, at Georgia State University’s Rialto Center for the Arts.

The composer led the nine musicians of the Bent Frequency ensemble positioned in the orchestra pit, an onstage cast of six, plus an ad hoc chorus of eight local singers. Luciano Trigos created the paintings that were projected as backdrop scenery as well as the costumes. Stage direction was by Luis Martín Solís.

The key to the opera is the libretto by Trigos’ father, Juan Trigos Synister (born 1941), written in his self-proclaimed Hemofiction style — literally “blood fiction.” It is relatable to early classical Greek comedy in that, to paraphrase from Aristotle’s Poetics, it also is a representation of ordinary “base” people who have some character flaw, distortion or ugliness.

The average operagoer may not get that far. What immediately strikes the observer in the face is that the libretto is filled with what we used to call “foul language” and is obsessed with sex, blood and death in the crudest manner — one might say enough to make a sailor blush.

It permeates the libretto and leaves that kind of negative first impression, at least in terms of the English supertitles provided. Most opera is, of course, riddled with marginal and dysfunctional characters, and early Greek comedy certainly contains its share of sexual and scatological innuendo. But this opera initially comes across less like a Greek comedy than a crude burlesque.

For the more determined observer, it’s a matter of getting over that and digging deeper for the opera’s substance. Hemofiction is described as being both abstractly folklorish and regional in its expression, rejecting the norms of cosmopolitan conventions.

At its very best, Trigos’ music is rhythmic and visceral, and it was performed convincingly by the ensemble in the pit. But there were times when it overshadowed the volume of the solo singers when they were not singing forte. It was sung in Spanish; the English supertitles were rapidly paced in their changes, especially in the second act, and many flew by too quickly to be completely read.

The opera’s two fictional protagonists are a married couple who are alcoholics, Primancianita (mezzo-soprano Amy Sheffer) and Juansonrisa (baritone César Torruella), whose realities of life are blurred or subverted to multiple conflated illusions by their drunkenness.

Their story is introduced by characters who are the couple’s fictional creations. There are a pair of imaginary sons (soprano Daniela D’Ingiullo and tenor Esteban Cordero), who are Siamese (physically conjoined, but not staged as being conjoined) and follow the protagonists through their daily course of life.

There is another pair of illusory, fictional deceased characters, both Muerta: Catalina and Antonia (actor-dancers Daniela Arroio and Anna Mariscal). They are representations of Primancianita, and are also Juansonrisa’s imaginary lovers and his victims, as he strangles them to death with his bare hands daily in his delusions.

There is also an unseen and imaginary El Presidente, a vague amalgamation of historical Mexican presidents with an added touch of the looming power of the Church. He is the object of Primancianita’s sexual desire: powerful, chaste, tall and güero (blond). A parallel theme throughout is the insistence that Primancianita was indeed a virgin when she married, the proof being the red, bloody underwear she has saved. But perhaps that, too, is illusory.

At the end, we are left with a collective brindis (toast) and the suggestion that in spite of everything, the couple — even through the blur between fantasies and realities — truly love each other. But the imagery of the final scene was that of a Muerta bearing a giant bottle of alcohol on her back as the lights faded to black.