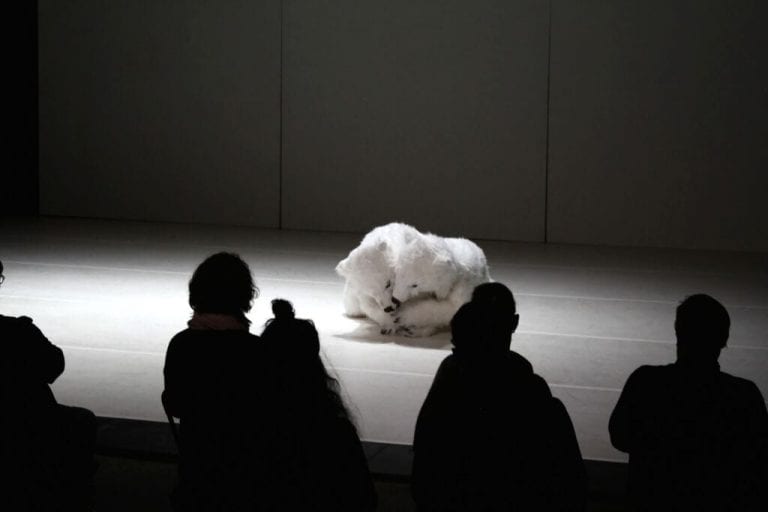 Review: Tanz Farm’s “Time For Us” seldom delves beneath its edgy and beautiful surface

Last weekend, Atlanta’s Goat Farm Arts Center opened its doors to the inaugural performance of the 2015-16 season of Tanz Farm. Lauri Stallings and Anthony Harper, curators for the annual series, continue to infuse the local contemporary arts scene with work that has as much global impact as it has edgy merit.

Leading the way is Fabien Prioville and Azusa Seyama’s duet Time for Us, presented in partnership with France-Atlanta. The performance marked the work’s American debut. With an enviable connection to Pina Bausch and Tanztheater Wuppertal, of which Seyama is a current member, the two recognize that they have high expectations to meet. Time for Us is Prioville and Seyama’s first co-choreographed duet, though they are married and have worked together professionally for years.

The work begins subtly and without ceremony or dimmed lighting. Prioville and Seyama crawl onto the stage dressed in polar bear costumes, nonchalantly marking entrance into an arctic world of innocence, love and playfulness. With gender and human considerations stripped away, the moment was beautiful in its simplicity. The bears tenderly spooned, doted, kissed and meandered around the stark white space, free to exist without boundaries. As gently as they entered, they swiftly departed.

Enter the humans. Mysterious, almost unintelligible dialogue was the soundtrack as Prioville and Seyama returned, now dressed in black athletic wear. They carried shopping bags, their faces expressionless, even ambivalent. They sat on pristine, white park benches, placed on opposite sides of the space by a stagehand, who also set a gold yoga ball on the floor between them. The dance began again.

What followed was a Herculean task: exceed expectations, clarify the ambiguity of their declared intentions and, most importantly, take risks. The project lacks some focus. Chronicling the evolution of a relationship from meeting to courtship to long-term commitment, Time for Us feels like a series of snapshots: highly evocative images that could be given more time to develop, resolve or transform. Occasional abrupt transitions cause the work to sputter and jerk, like a manual transmission car stalling and restarting. 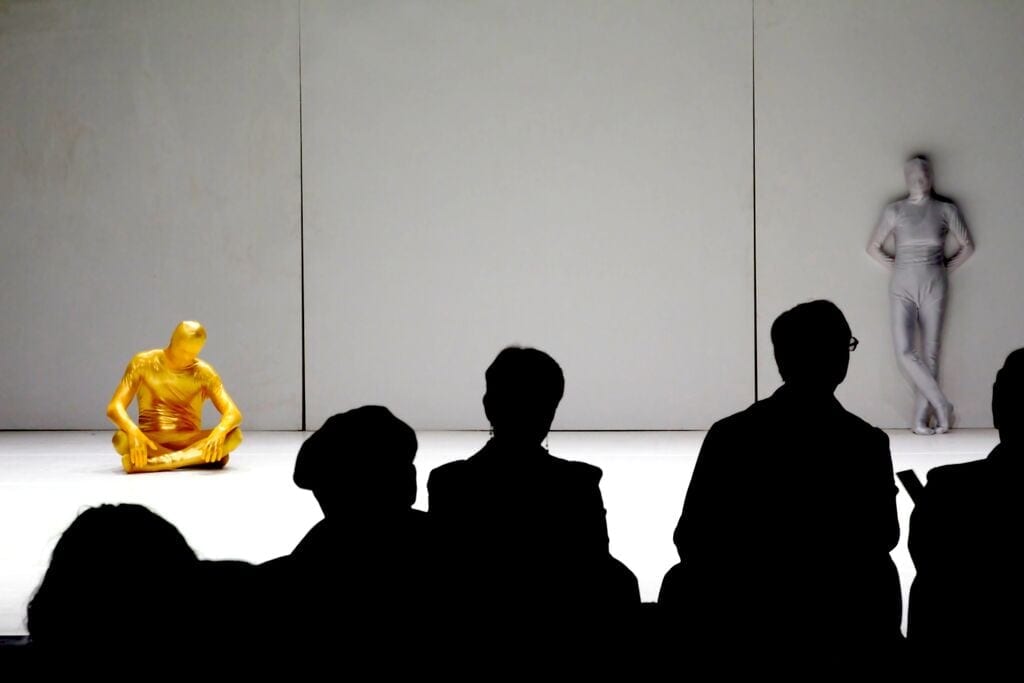 In one instance, the couple inflated the yoga ball with a pump, then with their mouths, together creating a symbolic “world” full of tenderness and shared responsibility. But once the task ended, so did the intimacy. Get it? Got it? Good. There was a noble effort to investigate abstraction, yet, powerful still-life images were set into motion and felt uncharacteristically literal. I found it surprising that an experience deeply rooted in intimacy was so sterile. Maybe that was the point.

The images contained in Time for Us were infinitely more impactful in stillness than they were in movement. The set vibrated with metaphoric possibility, a sharp frame for moving photographs. In the stillness we saw equality, sensitivity and maybe even mutual respect between the performers. As the work moved, though, it offered several overplayed, dated notions of gender inequality.

Prioville and Seyama intended to magnify a first encounter, then explore the intricacies of an artistic and romantic partnership. Notably we saw a damsel in distress, a man who saves her, a woman who cries after sex, a man who gives her tissues, a woman adorned with gold sparkly shoes, a man who leaves, a woman who drowns and a man who returns as a super hero.

Satire? It didn’t feel that way. A commentary? If so, say more. Possibly the most unfortunate image came at the conclusion of the work. Seyama, dressed in a white unitard, faded into the bright white upstage wall, Prioville slipped into a gold unitard, rounding his arms and spine to replicate the yoga ball; quite literally, he became their whole world. She is nothing more than wallpaper.

Throughout the 50 minutes, Seyama delivered a performance that effortlessly embraced radical emotional and physical shifts. In one exceptional solo, she placed a pair of shoes and two water wings in a small square around her, then kicked and poked at the restricted space. Her legs extended with razor precision; her hands and arms flew through a series of detailed gestures. Her athletic body and serene face were dangerously inviting.

The moment was riveting and all too brief. In contrast, Prioville seemed more neutral, void of dynamic shifts and depth. His pedestrian movement was aloof, sleepy and one-note. He broods in the background, she gets all the work done. When the lights faded on the motionless figures, many questions remained. Is this their relationship? All relationships? What could have been singular and unique, morphed into a male/female story we have seen many times before.

What defines risk? For me, it is vulnerability. Undeniably, Prioville and Seyama have something very special between them, but they didn’t let their guard down enough to allow us access to their world. Just as I cared about the polar bears, I hoped to care equally for their human counterparts. I was ready and eager to feel their relationship, not just observe it.