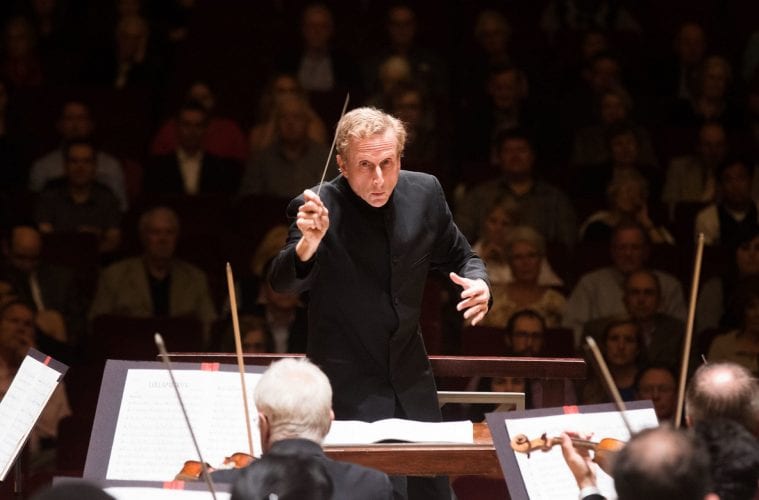 Review: Under baton of Wolff, ASO takes grand and hopeful journey on the “American sound”

This concert is the first in what the ASO has billed their Modern Masters series this season, focusing on music composed in the last century. Thursday’s program was a decidedly American repertoire.

Veteran touring conductor Hugh Wolff reappears on the ASO podium every few years. His last two appearances with the orchestra were in 2010 and 2013. While he extensively guest conducts, he also is ensconced as chairman of the orchestral program at New England Conservatory. Most recently, he has been appointed music director of the National Orchestra of Belgium, beginning in September.

Wolff and the ASO opened with John Adams’ “Lollapalooza,” written in 1995. What could be more American than a title like that? An archetypical American word of fanciful if vague origin, it means “impressive.” But as Adams himself points out, it also implies an overblown, outlandish scale and not particularly refined character. Its murky origins were somewhere in the last decade of the 19th century. Journalist and language scholar H. L. Mencken suggested that it may have originally referred to a knockout punch in a boxing match.

For composer Adams, much of the interest in the word “lollapalooza” lay in its spoken internal rhythm. From that, he created the six-minute work’s most prominent and succinct musical motifs — C, C, C, E-flat, C. The piece first lays down a funky ostinato, over which soon comes cascades of jazzy downward riffs in overlapping patterns. Into that mix the “lollapalooza” theme intruded, forcefully intoned by the trombones and tuba.

While only one of a plethora of musical motifs in the work’s complex dancing melee, that bluntly simple theme remained its most memorable, its signature. As the piece entered the last round, the orchestra had the music up against the ropes, as spaces between musical shouts and cries become longer. Then, at last: a final KO punch by the timpani and bass drum. Guest pianist Denis Kozhukhin has the perfect touch for Gershwin.

Just as Adams’ “Lollapalooza” captures a kind of raucous post-modern excitement of the late 1990s, George Gershwin’s “Concerto for Piano and Orchestra in F Major” captured the excitement of big city life in the midst of the Roaring Twenties, before the stock market crash and the Great Depression brought its youth-driven social and cultural dynamism to a screeching halt.

Denis Kozhukhin, the 30-year-old Russian pianist, exhibited a natural feel and comprehension for Gershwin’s idioms. That’s something too often missing from performances of this concerto and, unfortunately, more frequently with his “Rhapsody in Blue” — from classically trained musicians who “paste on” misunderstandings of style that sound artificial, to jazz pianists who wrongly try to add elements of bop and jive that Gershwin would never have imagined.

Kozhukhin, however, was right on the money, offering up a performance that was true to Gershwin’s language and gives it breath, a lyricism where it is warranted, and a drive that brings the excitement home.

After intermission came Aaron Copland’s “Symphony No. 3” of 1946. It has often been referred to as the quintessential American symphony, or the first symphony to be truly “American” in character. For this, history and culture fortuitously coincided. The Second World War had just ended, with the United States emerging as one of two world superpowers as the dominance of old European world powers ended.

Copland had, by that time, firmly established his populist “Americana” style, as typified in such wartime populist works as his “Appalachian Spring,” “Lincoln Portrait” and “Fanfare for the Common Man.” The nation was ready for unsullied optimism. Copland gave it to them, incorporating his own popular “Fanfare for the Common Man” into the last movement for good measure.

At over 40 minutes in length, it is a piece that has come to typify an “American sound” in classical symphonic music in popular culture. Spacious in its harmonies, frequently lyrical, but more frequently noble in sentiment, the performance by the ASO became grandly triumphant in the end. It was a fine conclusion to an all-American program that was consistently positive, hopeful and upbeat in its outlook — something which our nation needs now more than ever.