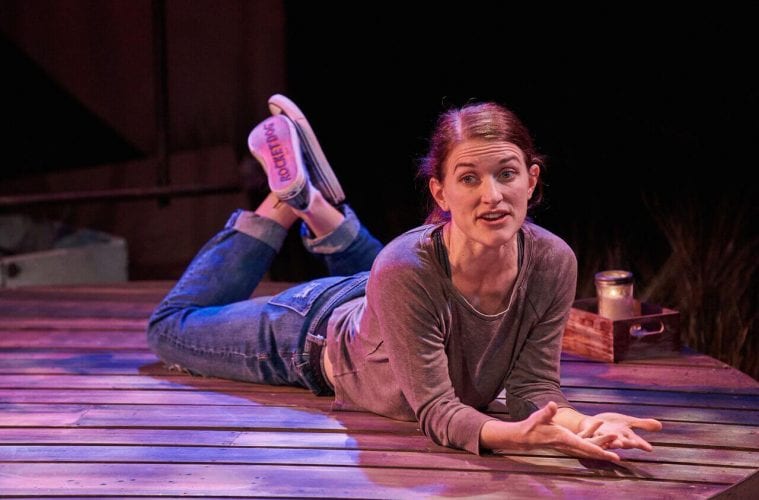 In the 2012 Oscar-nominated film Beasts of the Southern Wild, screenwriter Lucy Alibar tells the story of a father and daughter who find their marginal existence living on the Louisiana bayou disrupted by a hurricane. The film was based on her play Juicy and Delicious, and Alibar returned to her theatrical roots in her one-woman show, Throw Me On The Burnpile and Light Me Up, which premiered at Center Theatre Group in California last year.

Burnpile is her own father-daughter story, weaving together memories from her childhood growing up in Grady County in south Georgia. The show is being adapted into a pilot for FX/Amblin Entertainment, and is onstage in the Aurora Theatre Studio through October 1. Director Rachel Parish is at the helm, with Dad’s Garage company member Taylor M. Dooley performing as “The Girl.”

This coming-of-age story is told from The Girl’s point of view during her fourth grade year, when she takes over as her dad’s legal secretary. Her eccentric Southern family consists of her mother, who Febrezes everything, including the dog; her younger brother, who holds an egg in his hand at all times; a litter of cats and a randy goat; and her anti-Jesus, larger-than-life father, who defends inmates on death row. This gaggle of characters makes for some fun characterization from Dooley, but the character of The Girl herself really has nowhere to go.

At the start of the play, Dooley enters the stage with her hair pulled back in a ponytail wearing ripped jeans, black and white plaid tennis shoes and a baseball t-shirt. Kudos to set designer Elizabeth R. Jarrett and lighting designer Maranda Debusk, who pull the audience in with warm, twinkling lights hanging across the theater from electric poles that anchor the set. Two rounded, wooden platforms are in the center of the theater, and are surrounded by grass and cattails. Throughout the show The Girl lights mason jar candles to mark transitions in the story. Behind everything is a glowing burn pile stacked with files, a banjo, typewriter, saw, chairs and other junk.

The Girl recalls the incidents that shaped her childhood, including her father losing his right eye after suffering a massive stroke, a surely teacher named Ms. Shadrach who taunted her for having a 70 IQ and finding an unlikely friend in a big fat bully. Through experiencing loss, from the execution of prisoners on death row to mysteriously losing her best friend, her innocence is stripped away. The problem is that The Girl never comes off as very innocent. Her father treats her more like a teenage son than a daughter, and pervy teachers and “white trash” bullies seem to have gotten to her long before the idea of pending death. She does not live in a world where she is able to don rose-colored glasses, and so Dooley’s performance, though committed, lacks momentum.

Part of this is due to Alibar’s script, which contains beautiful language but is sardined with half-explored themes. The idea of everyone needing a defender first comes to light when her dad says, “No matter how sorry a piece of shit you are, everybody deserves a defender to try for life over death.” And comes back in different moments, like when a young man in town is sexually abused, or when her father tries to teach her how to fight and says, “Predators are more into the fight than the slaughter.”

Alibar also comments on religion — her father is anti-zealot and has no interest in Jesus, going so far as to throw a “Taking the Christ Out of Christmas” party to the tune of “Day is Done” by Peter, Paul and Mary.

In addition to the father-daughter bond, Alibar questions what remains when we die, like the hearts of saints and dinosaur atoms. She also tries to carry a narrative about the ways both mitigating and aggravating circumstances contribute to a person’s choice to commit murder, and weighs what it really means to be innocent or guilty.

Aurora Theatre adds another circumstance, because though Dooley is white, her understudy is not. The nature of the storytelling would be different if the performer was not white, because of the preconceived notions audiences bring with them when seeing Southern stories with a black narrator. There is a lot to chew on, but the sustenance sometimes gets lost.

The story transports the audience back to a time when entire towns gathered to witness the execution of an inmate on Death Row, but this is not the story of the inmates. This is The Girl’s story, and for her there does not appear to be anything at stake. Many solo shows attempt to connect the writer’s life to the outside world in order to tell a more universal story, but here, the character’s world is small and there is not a world outside of it. The show comes off as a story being told about some things someone remembered once. The poetic writing is stuffed with humor, but it feels like walking into a novel with only one chapter.