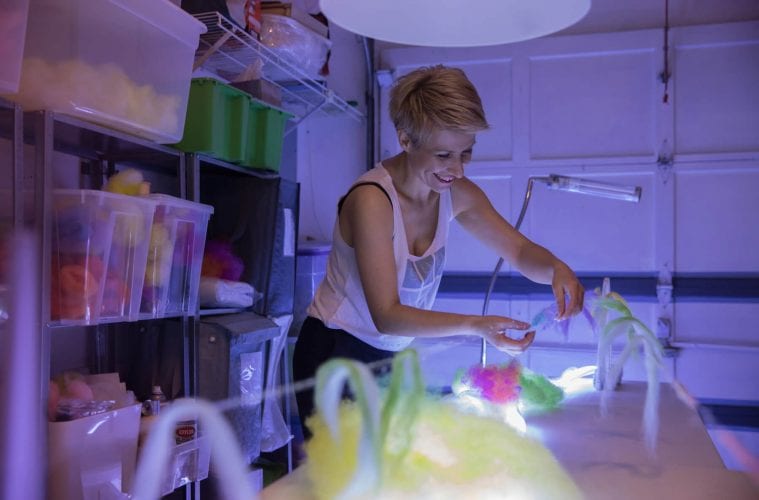 Reimagining the future: a conversation with Bojana Ginn

Since moving to the United States from Serbia in 2002, Bojana Ginn has captured the imaginations of innumerable art lovers, gallerists and scientists alike with her two- and three-dimensional ephemeral works that explore issues on the forefront in the realms of science and mathematics — the ethics of bioengineering, meddling with the human genome and developments in artificial intelligence. In the past few years, her work has taken her everywhere from the Venice Biennale to the 2015 Beings Summit to MOCA GA where she was recently named a 2017–18 Working Artist Project Recipient.

Tuesday marked the opening of the group exhibition Digital Transplants: Mediated SciArt, which Ginn coordinated with Meredith Kooi and ALTERED MEANS at Lightroom in Decatur. The pop-up, which opened Tuesday and closes this evening at 9 p.m., features work from artists exploring similar realms to Ginn in their work: Suzanne Anker, Julia Buntaine, Frank Gillette and Mariana Manhães. “Moving within these circles of arts and sciences, I’ve been dreaming for years of organizing a large show of these works,” Ginn confided to me during our phone interview. “But I didn’t know if it would be possible —  it’s expensive to ship these works, and it’s incredibly time-consuming. But thanks to William Carpenter, Meredith Kooi and my husband — a pop-up show was possible.”

ArtsATL got together with Ginn to discuss the exhibition, her work blurring the lines and exploring the ethics of science from an artistic vantage.

ArtsATL: Your more recent works have had a focus on a timely matter — the union of physical and digital realms — how the body is affected by technology. What recent scientific advances do you find yourself thinking about most recently?

Ginn: There are several. The first is probably the most controversial — it can be good and bad. CRISPR/Cas9, it’s important for people to know about. Essentially, it’s a tool for accessing the human genome that’s incredibly precise and relatively cheap. It makes it so easy to . . . edit our babies. It’s something we should be having very serious discussions about.

Then there’s the development of Artificial Intelligence for the military. When I was speaking at a world technology conference, someone spoke about what was happening in the military — they were finishing up machines that could decide — in the field — who to eliminate. These are things that need to be regulated.

And I’m also interested in any development in regards to solar energy and hydroponics. Everything should be solar, in my opinion. We can successfully grow veggies in basements! That’s so exciting!

ArtsATL: Just out of my own curiosity — what periodicals, journals and publications [do] you read most regularly? How often do you still regularly engage with your background in science, outside of your artistic practices?

Ginn: I read a lot of Popular Science, Scientific American and Wired. I love Ted Talks. Here and There is a great book. I like The Mathematics of Life by Ian Stewart. But really, the most specialized information I get is from attending mathematical conferences — it gives me a chance to attend these highly specialized lectures, which can be hard to get through sometimes but then sometimes you get to hear about scientific breakthroughs firsthand.

ArtsATL: How do you go about selecting which conferences and summits you’ll attend?

Ginn: I always get invited somehow; it’s serendipitous. It started with work I was doing that was inspired by DNA and proteins. I was translating their lines into sculptures and drawings. I made a fortuitous connection with a scientist in the realm — the research we were both doing had a lot of overlap. That was the first time I was invited to submit work and ended up being published by the arts and mathematics conference.

One day I got this email that I was nominated for a world technology award in art — I thought it was spam! I think I was nominated by someone who attended my lecture at the Beings Summit in 2015.

It’s encouraging. It sounds amazing — but remember, in between these serendipitous events is lots of hard work.

ArtsATL: Recognizing that your work is more of an exploration of the ethics in the sciences and less about public social issues, I can’t help but wonder if the current political climate in the United States has drummed up any feelings you have from experiencing the Serbian revolution in the 90s? Has that had any affect on your creative works? An image from Ginn’s experiences in Serbia during the overthrow of Milošević. (Image courtesy of the artist.)

Ginn: Absolutely, I’m very concerned. The nationalism is the same. I keep thinking about how long we have to keep explaining the basics of civil behavior. How wrong intolerance is, on so many different levels. It’s depressing.

The crisis was in the 90s — I was there as a student. It was tough economically. The extreme nationalism had gotten out of hand. It was very tough. At that time I was drawing because it was a form of art that you don’t need much material for. I was making these surrealist drawings and articulating what was in my mind. So at that time, yes, what was happening there was definitely affecting my work.

At the time I was also more politically active. I was there during the revolution. I was protesting. Milošević was taken out — it was a dramatic time. Things are so much better in Serbia, and people are moving forward. So I don’t have direct concern for the political situation there.

But what gives me hope is that so many people think differently and are motivated to act. I hope we will overcome the social issues we are facing. I keep thinking that it has to get worse before it gets better. And it reminds me to take nothing for granted, that we always have to fight. We have to fight for the values we want for ourselves and our children.

We all need to be more politically active. My way of doing so is by dealing with these advancing technologies within biology and technology and the environment.

ArtsATL: So then would you say that you think of your work as political? Ginn: If an artist is at all interested in politics — their work must look political. It’s so important to raise those issues, to get them right in your face.

But I like to build new worlds. There’s a place and need for that too. I use gentle materials and create these gentle arrangements of light and fiber to create a utopian vision to encourage and inspire more gentleness in the world. Maybe it’s more indirect but . . . it’s important.

One role of art is also to reimagine the future. To think of different scenarios.

ArtsATL: Your exhibition last year at Whitespace, Phygital Muse, took a deeper look at the ethical concerns surrounding transhumanism and other future technologies.

Ginn: Yes, so in that show I was not dwelling on specifics because we still don’t know what they are, which are positive and which are negative. No one knows how exactly things will play out.

My work there was the same reason I was invited to the Beings Summit in 2015. It was a conference dealing with the ethics of bioengineering. I spoke about the importance of precautions and regulations in that field. There is so much more about this, concerning energy, environment and socioeconomic issues.

Transhumanism is an international movement where people want technology leaders — people who want to have artificial intelligence enhance the human mind and body. That’s something very controversial that is coming upon us really fast. It’s controversial. It could enhance our capabilities but result in a new species. There are lots of negatives that could come from it. So with Phygital Muse, I wanted to look at the role of that technology today. Happiness Video was a digital machine that looked very happy — right now it might make us happy, but in the future, there can be prosthetics that can be implanted in our mind. It sounds like science fiction, but it’s important to think about. My works are tiny meditations on that. Our body can be triggered and influenced by our connection with computers.

It’s growing exponentially. When I tell people that they wave it off. But I really think we have a problem imagining big numbers — we can’t imagine those spaces or numbers. We have problems with infinity, and it makes us underestimate the speed with which these developments are moving forward and how serious they are.

ArtsATL: What have you learned from participating in such events? How have they influenced your artwork?

Ginn: Knowing my work, you know how much craftsmanship and beauty are important to me. What excites me beyond anything are ideas. At these events, especially Venice, I think about whether or not my ideas are sharp. I want to be in the moment. Are they contemporary? Are they pertinent? Are they important? That’s where I test.

ArtsATL: Congratulations on being one of the WAP Fellows! What are your plans and goals for the Working Artist Project? What are you most excited about for it?

Ginn: What an honor, right? I’m so excited and humbled by MOCA GA. To get everything together — the whole package. What support!

I’m excited about that big wonderful space. For a sculptor to be in that space, to build in that space. The moment I heard I got that award I am living that space. I’m constantly there and working nonstop. I want people to walk in and be surprised. It’ll be my work but also surprising. As a sculptor, you can only hope for a vast place to spill. That’s where I live now.