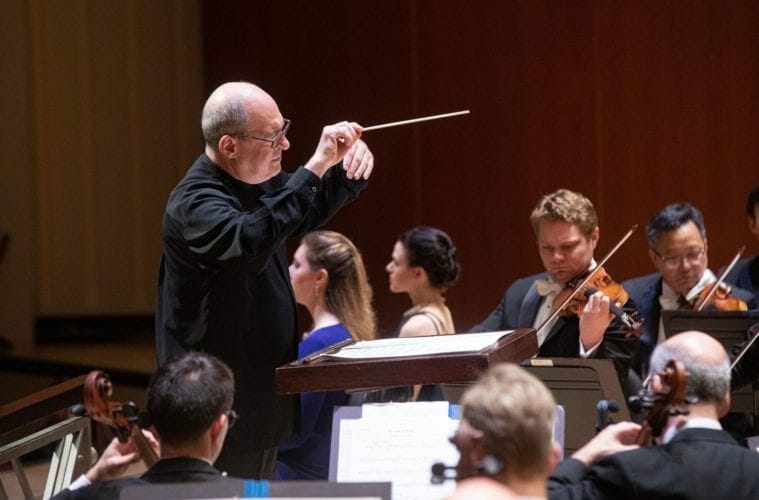 The melodic, cinematic music of Ralph Vaughan Williams showcased the best of the Atlanta Symphony Orchestra. (Photos by Jeff Roffman)

Ralph Vaughan Williams is easily among the most accessible of classical composers. He gracefully straddles the gap between the stern intensity of Johannes Brahms and the cinematic relatability of Aaron Copland. His work never fails to capture the imagination with the sort of epic grandeur that tracks wonderfully alongside tales of Narnia or Middle-earth. It has the sort of epic grandeur that accompanies the slaying of dragons, the summoning of demons and the triumphant return of victorious knights.

With its strong influences of English folk song traditions, Vaughan Williams’ output marked a decisive stylistic break for the British classical tradition from its German forerunners, retaining all of the ominous prestige while ushering in bright, inviting overtones. His music is well inside the wheelhouse of the Atlanta Symphony Orchestra and its Chamber Chorus, who played loving tribute to Vaughan Williams on Thursday at Symphony Hall. (The performance repeats at 8 p.m. Saturday.)

The evening began in fine form with Vaughan Williams’ Serenade to Music. From the opening strains, it was clear that this was a piece that would lend itself well to music director Robert Spano’s flowing, unencumbered conducting style. Melody soared in lush, sweetly penetrating waves accentuated by the precise touch of principal violinist and concertmaster David Coucheron. Three weeks ago, Coucheron seemed unwilling to give Beethoven’s Violin Concerto the raw aggression it demanded. Thursday night found him playing to his strengths, namely the smorgasbord of subtle variations that lie at the gentler end of the musical spectrum. The violinist was in peak form, showcasing his seemingly telepathic chemistry with Spano’s direction. The ASO’s Chamber Chorus was up for the challenge of Vaughan Williams’ “Serenade to Music.”

All such commendations to the instrumentalists are, however, a footnote in comparison to the gauntlet that Serenade throws down for its vocalists. To this end the ASO employed its truly formidable Chamber Chorus, one whose thundering expanse filled the hall as much as the soul. The four soloists — soprano Maria Valdes, mezzo-soprano Sofia Selowsky, tenor Norman Shankle and baritone Morgan Smith — contributed a narrative that became lyrically and melodically darker as the singers progressed, each embodying a distinct musical character.

Valdes was full of triumphant passion, emitting a piercing, vibrato rich tone that soared above the orchestra. Shankle was warm and charismatic, culling forth images of a chivalrous knight, while Smith was the dark, sinister beast that thrashed about rabidly on grim, rocky shores. The sole exception to this outstanding display was Selowsky, who, while in overall fine form, seemed to lack the sort of dramatic undercurrent apparent in the performances of her counterparts.

For such a strong and engaging start, the second piece served as a largely unfortunate stumbling block in the form of Johann Sebastian Bach’s Cantata No. 29, Wir danken dir, Gott, wir danken dir (We thank you, God, We thank you). The choice seemed pragmatic at best — inserting a guaranteed crowd-pleaser between two works by a lesser-known composer. The result was a striking imbalance that threw off the evening’s mood. The audience had just been lost in a slavish devotion to melody but was thrust back into the stiflingly academic world of incessant arpeggiation.

The performance itself was all very fine — Bach’s unceasing reliance on the pipe organ makes him seem like the Mike Oldfield of his day — and the orchestra handled it all with its usual aplomb. But on the whole it just seemed painfully out of place. Even the four primary vocalists who had just commanded the chamber during Serenade now seemed to be on autopilot.

The evening was redeemed with the glorious exaltation of the third and final piece, Vaughan Williams’ Symphony No. 5 in D major. It’s here, in this stunning sonic achievement, that the mind is carried away to the fires of Mordor, the lost city of R’lyeh, the misty shores of Avalon and every other realm of fantasy in which forest nymphs play by day and dark specters cavort by night. The orchestra was joined by the ASO Chamber Chorus for the two Vaughan Williams pieces.

Vaughan Williams commands this realm with effortless mastery, beckoning to the listener with an opening Allegro espansivo that sounds, somehow, like a slightly brighter, more uptempo take on Samuel Barber’s Adagio for Strings. The striking contrast with Bach is instantly apparent — the listener is never made to endure aimless virtuosity and left to focus entirely on the stunning permutations of melody.

The ASO was certainly up for the task of conveying this sort of transcendent beauty. It is without question the group’s stock in trade. But how would it tackle the second movement with its more jubilant enthusiasm? Remarkably, Spano’s choice to play it in a tense, understated fashion added to the piece by giving a sharper contrast to the occasional moments of unrestrained abandon. The result was a cinematic effect that would have made the piece at home on a contemporary Hollywood soundtrack.

The third and fourth movements returned to the thematic conventions of the opening Allegro, further exploring Vaughan Williams’ transcendent genius for melody. Of particular note in the latter half was principal oboist Elizabeth Koch Tiscione, whose solo was undoubtedly the evening’s capstone.

Ralph Vaughan Williams is that rare composer who can sound at once torrential and bittersweet, and the ASO gave his genius the palpable enthusiasm it deserved. To borrow a line from the lyrics of Serenade to Music: “Such harmony is in immortal souls.”