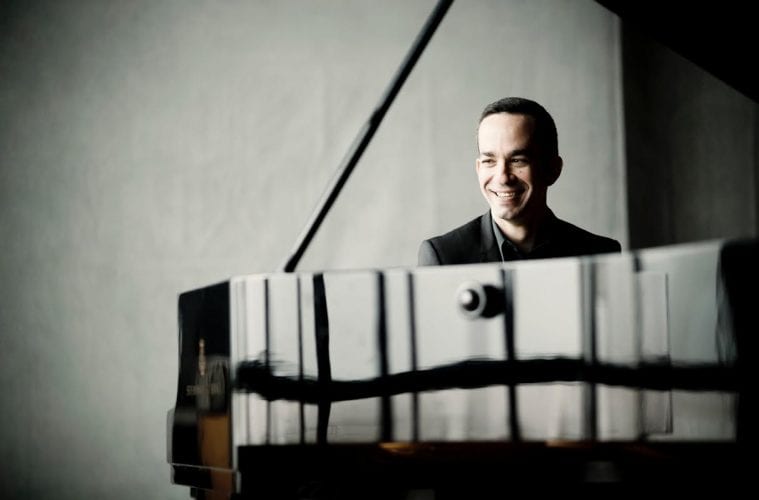 On Thursday evening, the Atlanta Symphony Orchestra performed music by Wagner, Mozart and Beethoven at Symphony Hall, led by guest conductor Matthias Pintscher and featuring pianist Inon Barnatan as guest soloist. The concert will be repeated Saturday at 7:30 pm and Sunday at 2 pm.

Pintscher last conducted the ASO in November 2012, leading works by Mozart, Ravel and Stravinsky, plus one of his own compositions, “Towards Osiris,” as the concert opener. Barnatan made his ASO debut later in that same season, in May 2013, performing Beethoven’s Piano Concerto No. 4 as a last-minute substitute for pianist Marc-André Hamelin.

That these two have come together for this week’s ASO concerts is not entirely surprising; they have collaborated as conductor and pianist. Pintscher is also a composer, and Barnatan is known for performing his own compositions, sometimes with collaborators such as cellist Alisa Weilerstein (by happenstance, a guest soloist with the ASO during that same 2012–13 season). The music industry is built of close-knit artistic relationships.

Some things, however, take a long while to make their return. Such is the case with the opening work, Wagner’s “Siegfried Idyll,” which the ASO has not played on a subscription concert in more than 30 years. That’s a stunning thought, given that principal guest conductor Donald Runnicles is a Wagner specialist, not to mention the work’s place as old-school standard.

Pintscher’s approach was more atmospheric than precise, giving attention to orchestral color and careful tapering of phrases, but a bit of fuzziness as to exactly where those tapers ended. The pacing, however, was good. Wagner taken too slowly can be deadly.

Mozart’s Piano Concerto No. 24 in C minor, K. 491 is radically different from his two preceding piano concertos. It is as much a concertante work as a concerto, and it is dark and brooding, one of only two he wrote in a minor key. It also employs the largest orchestra of any of his concertos, the only one requiring both oboes and clarinets. In many ways it is almost like a serenade for piano and winds, they are so prominent, especially the wonderful “Larghetto” that constitutes the second movement. Barnatan’s playing was sensitive and insightful, restrained in volume, feeling much more in a partner role with the orchestra. The composer left no cadenzas for this work. Barnatan chose one by Murray Perahia, which didn’t particularly contribute musically to the concerto itself but was serviceable as a vehicle for Barnatan.

Beethoven’s Symphony No. 4 in B-flat major, which followed intermission, is mostly sunny and buoyant — and could have been a little more so in this performance. Pintscher, who turns 44 next week, has garnered industry buzz as a conductor, but the concert did not possess the same electricity the orchestra generated last week with guest Marin Alsop at the helm. There seemed to be some resistance between him and the orchestra, and its overall demeanor was somewhat reserved.

One of the great curiosities of this concert’s programming is that all three of the works required only one flute. So a special nod for double-duty work goes to associate principal flutist Robert Cronin, who ably played in them all, as principal flutist Christina Smith was engaged as substitute principal flute with Chicago Symphony Orchestra this week and will do so again next weekend when CSO plays at Carnegie Hall.

Most intriguingly, violinist Christopher Pulgram, an ASO roster musician who is officially on sabbatical this season, was spied among the other violinists on stage, evidently filling in as a substitute player this week. He had been back in town to play in this past Sunday’s concert by Peachtree String Quartet, of which he is artistic director. The concert was an addition to the quartet’s season, added in part because Pulgram missed the music and performing with his colleagues. One can easily wager that his sentiments apply to playing with the ASO. Music is, indeed, built of close-knit relationships.