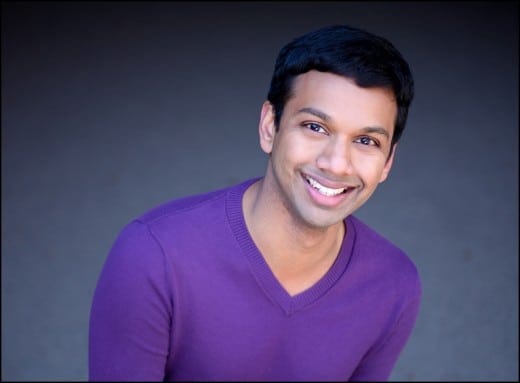 Playwright Snehal Desai chuckles when recalling his mother’s first response upon learning her son had been accepted to Yale’s graduate school for theatre studies. “You can still take some classes at the law school, right?”

Growing up in Quakertown, Pennsylvania, Desai was no different from millions of other first-generation Americans whose parents are inclined to remind their kids, “We came here to give you the kinds of opportunities we never had back home.” Repeatedly.

But the irony of the immigrant dream of unlimited opportunity, says Desai, is that it tends to cover a very limited spectrum — including doctor, lawyer, engineer or businessperson — none of which was appealing to him.

Live performance, on the other hand, had his name written all over it.

“I must have been four years old when my parents took me to see Cinderella,” remembers Desai. “Afterward, I got to meet the actress who played the lead backstage, and I remember being amazed that she was an actual person who could talk to me offstage and out of character.”

The introduction to theater left Desai feeling as if he’d found a sense of community and home. And though his mom and dad indulged his interest as a hobby throughout high school, by the time Desai was a freshman at Emory University (class of ’02) he’d fully assimilated his parents’ wish that he aspire to a more “serious profession.”

As a political science major, Desai was a quick study, finishing the required course load by the end of his sophomore year and working as a Senate intern for Max Cleland along the way. Not wanting to graduate ahead of his class, Desai explored his options, enrolled in a directing class, found his tribe and declared a double major of poli-sci and theater.

“Vincent Murphy and Jan Akers [former and current artistic director of Theatre Emory] were both really supportive,” says Desai. “They encouraged me to do everything from acting, stage management and stage craft to design and administration.”

Akers remembers her young charge, who now serves as literary manager and artistic associate at East West Players in Los Angeles, with a mixture of pride and admiration, calling Desai “a consummate theater artist.”

Citing his director credits at the Public, Yale Rep and Alliance theaters as well as his membership at the Director’s Lab at Lincoln Center, Akers characterizes Desai’s voice as “important for its fresh insights on cultural stereotypes, orientation and how we perceive one another.”

All of which made him an ideal candidate when Akers curated Theatre Emory’s inaugural Global Voices: Spring Staged Readings.

A series of readings from 13 culturally diverse playwrights, Akers promises Global Voices will “make imaginative, innovative choices in design, take risks with content and style, redefine what performance means and help keep theater in the fabric of people’s lives.”

The plays include The Who & The What by Pulitzer Prize–winning author Ayad Akhtar — whose Disgraced is now a critical and commercial hit on Broadway — and two pieces by Desai: Whaler (about the perils of two gay men trying to date in a less-than-inclusive, if not downright homophobic, world) and Trials with Brownies (the story of the first South Asian to become Indian American in the United States).

The impetus for creating Global Voices, says Akers, is “to invite new perspectives on how we see one another in the 21st century . . . how we respond to one another in terms of culture, race, religion and gender.”

Moreover, adds Desai, theater “can also excavate the histories of people in this country . . . and bring alive that which is rarely animated by text books and classrooms.” Something with which he has personal experience.

“When I got to Yale [class of ’08],” he explains, “it was a rehashing of the white, Western canon of Chekov, Ibsen, Brecht and Beckett, which I appreciated. But I was missing exposure to artists whose experiences might reflect my own.”

To remedy the problem, his professors in New Haven suggested Desai create the kind of material he wanted to see, which is how he came to write, direct and act in Finding Ways to Prove You’re Not an Al-Qaeda Terrorist When You’re Brown (and Other Stories of the gIndian.) Desai performing in his play Finding Ways to Prove You’re Not an Al-Qaeda Terrorist When You’re Brown (and Other Stories of the gIndian.)

The play premiered at Yale Cabaret, was picked up by regional theaters nationwide and resulted in Desai touring the country for two years as a performance artist.

The experience was rewarding as an artist, but the unexpected prize was, says Desai, “attracting a good turnout among Indian theatergoers who were expecting a show about racial profiling, but not expecting a lot of talk about what it means to be gay and South Asian.”

Recalling a particular performance in San Francisco when an Indian family was seated next to three drag queens, Desai’s delight is infectious. “I just loved seeing older, Indian parents seeing the drag queens,” he explains, “recognizing who they were and understanding that they were all responding to the same material.”

Other indelible impressions were made by the young, gay Indian men who would thank him after seeing Finding Ways, saying, “I never thought my story would be told, or that I’d see myself on stage.”

Akers anticipates conversations like these in Atlanta when Global Voices makes its debut on January 27. (It runs through February 21.)

“The main reason to attend is to hear some brilliant writing. We’ve selected exceptional playwrights who, I think, don’t land softly in the theater community. And that’s why you would want to be in the room with these plays!”

Not to mention the opportunity to change minds in more subtle, yet profound ways.

“What is important is not just for us to be doctors and lawyers,” believes Desai, “but for us to have a voice as storytellers . . . sharing our experiences and, in the process, making them a part of the conversation of the country.”

An aspiration to which any mother would be proud—no matter her country of origin.