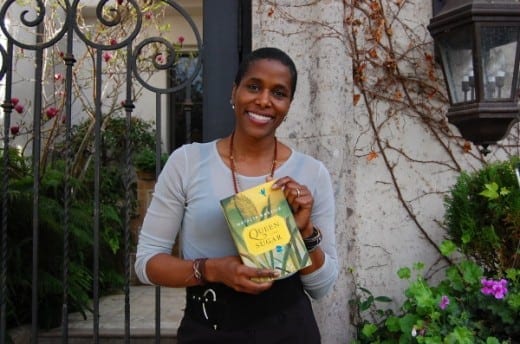 Natalie Baszile’s impressive debut novel Queen Sugar (Penguin Books), released last February, did not make it into the major literary outlets’ 2014 “best of” lists. (We included it in our 2014 “favorite books” list.)

Its accolades were both limited and short-lived. Which is a shame because this visually precise, reflective novel is more than deserving. Baszile will speak at Hammonds House Museum at 3 p.m., January 31.

At its core, Queen Sugar recalls a woman-versus-nature narrative not unlike the 1984 film Places in the Heart. A young widow and former inner-city art teacher, Charley Bordelon, abandons her Spanish bungalow in Los Angeles for a small room in her grandmother’s simple Saint Josephine Parish home in the Louisiana bayou to build a new life for her 11-year-old daughter Micah and tender the 800 acres of sugarcane her father bequeathed her. Baszile writes, “The truth was, she needed this farm. It was the opportunity she’d been hoping for. Until now, her life hadn’t gone the way she planned.”

Charley’s spirits falter once she confronts the stunted state of her neglected land, the rusted farm equipment and the paltry funds available to resurrect the sugarcane in time for October harvest. To add another albatross, Ralph Angel, her angry and jealous half-brother, returns to challenge her for what he feels he’s owed of their father’s inheritance.

Charley’s desperation is palpable: “So many things she didn’t know, so many obstacles she couldn’t see, so many challenges she couldn’t even imagine, and no one to guide her.”

As an African American woman, Charley learns soon enough that in the male-dominated world of sugarcane farming, her race and gender are two damning strikes against her. Baszile deftly explores the tensions between poor farmers struggling to stay in the black and corporations sweeping up their plum, profitable land in the guise of goodwill. She also explores the indentured relationship between Latino and African American laborers and the acreage they’ll never be able to own themselves. The author’s strengths shine through in her lush, lyrical language: “Cane fields the bright green of a new pippin apple, while the grass was almost jade, the woods the deep green of raw spinach, and the reflection of the sunlit trees along the bayou a vibrant chartreuse.”

The author’s prose lights up the senses — the grating moans of near-broken tractors, the aroma of impermeable red clay, the savory taste of lumps of crabmeat and coins of sausage simmering in the thick brown broth of gumbo. The narrative arc follows the harvest season, and as Charley finds herself on the verge of losing everything — her farm and the people she loves — Baszile expertly unspools the intricate emotions of a woman who must battle both man and nature to survive.

If there is anything lacking in this exquisite novel, it’s a sense of Charley’s marriage to her deceased husband. With the Louisiana sunshine bearing down on her scalp, her memories of their life together — the violent nature of his death, the weight of his absence in their young daughter’s life — rarely enter Charley’s mind.

Still, Baszile has created a sensual world steeped among waist-high stalks of cane and miles of cotton fields. Here’s hoping the paperback edition, published this month, arouses the kind of critical acclaim and viral praise Queen Sugar has more than earned.