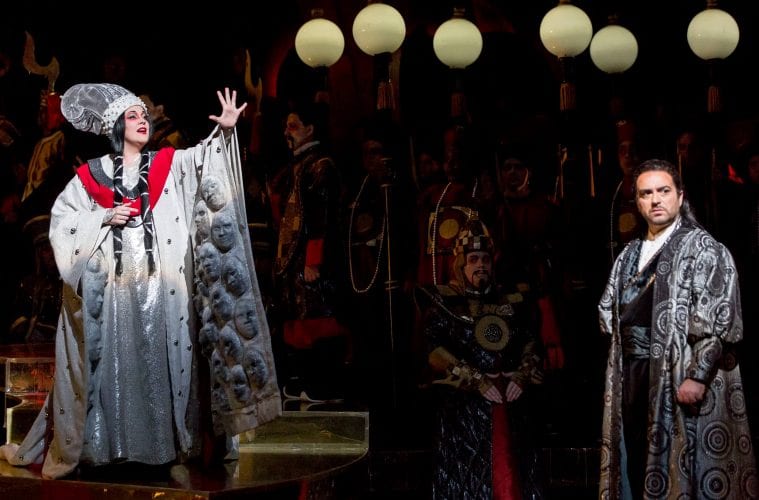 Review: The Atlanta Opera’s “Turandot” overcomes the holes in its plot with strong details

On Tuesday evening the Atlanta Opera presented the second of four performances of Giacomo Puccini’s Turandot at the Cobb Energy Performing Arts Centre. It was a successful production, cohesive and engaging, both musically and visually. Two more performances remain: Friday evening and Sunday afternoon.

Frankly, Turandot is a conundrum. It is a popular, major staple of operatic repertoire, primarily for the power of its music and exotic spectacle. The drama itself, in the end, is terribly flawed.

In a nutshell, Turandot (soprano Marcy Stonikas, in her Atlanta Opera debut) is a Chinese princess who has chosen to deny all men and never wed, in revenge for the rape and murder of an ancestress by an invading Tatar conqueror. She believes herself the spiritual reincarnation of her ancestress, so her purity and denial is a matter of pride as well as honor. Her father, the Emperor Altoum (tenor Nathan Munson), has made a regrettable oath that all suitors who wish to marry Turandot must solve three riddles or be executed. As of the middle of Act I, the resulting head count is at 26, that last failed suitor being a Persian prince.

We meet these two characters last, being first introduced to the protagonists, Liù (soprano Kelly Kaduce), the loyal servant of Timur (bass Steven Humes), an aged, deposed central-Asian king in exile, and his son, Prince Calaf (Gianluca Terranova), who has been searching for him. All well and good in that respect, except that Calaf falls in love at first sight with Turandot at the execution of the Persian prince — what an occasion at which to fall in love — even though the law regarding the riddles and risk is reiterated publicly by a Mandarin (bass Alan Higgs). The mostly comic trio of Ping, Pang and Pong (baritone Daniel Belcher and tenors Julius Ahn and Joseph Hu), all in service of the royal court, try to dissuade him, but to no avail. In addition, Liù is secretly in love with Calaf.

It’s not that the premise of the story itself is bad. It has somewhat vague roots as a supposedly Persian tale, collected by François Pétis de la Croix around 1710, rewritten into a commedia dell’arte play by Carlo Gozzi in 1762, that was again readapted in 1801 by German poet-playwright Friedrich Schiller with a more “heroic” approach to characterizations, a la the Romantic style, with a bit of moralism to boot. Schiller’s version was translated into Italian by Andrea Maffei. Puccini and his librettists, Giuseppe Adami and Renato Simoni, based their work upon this foundation.

The problem is Puccini left the opera unfinished at the time of his death, only having completed two-and-a-half acts. Those are spent building up the conflict of its premise, up to the self-sacrificing death of Liù. Puccini left only sketches for the remainder, completed by composer Franco Alfano, which struggles to make a quick and believable resolution.

Puccini basically painted himself into a corner, trying to redeem Turandot through acceptance of her own suppressed love/hate feelings for Calaf and resolve the drama in the course of one extended duet. But in the end, we wind up still disliking the ruthless Turandot. And Calaf, though maybe heroic in 1924 terms, comes off as a bit of an arrogant cad, centered on his own feelings of triumph in love. We find ourselves instead most in empathy with the loyal but now quite dead Liù and the grieving Timur, and sympathetic to the people of Peking and their Emperor, who in the end celebrate, more than anything, that the ongoing bloodshed is finally over.

As is frequently the case with Atlanta Opera, this cast was strong as an overall ensemble, but Terranova and Kaduce came across as the stars of the show. Curiously, though she has performed the role three times before (Naples, Cincinnati, Seattle), Stonikas simply felt miscast, judging by this particular performance. The duet between her and Terranova after the death of Liù was not quite convincing enough to overcome the opera’s one major inherent dramatic flaw and make Turandot any more likable as a character.

André Barbe’s elaborate, intricate costuming was impressive, and the visual palette enhanced the storytelling. The design of the dancers’ costumes definitely lent itself to their movements, choreographed by Renaud Doucet. The Emperor’s costume was exquisite. The only lackluster element was the garment of Turandot herself, which lacked detail and could have had a bit more interesting lines and draping, its fabric choice a bit dull in contrast to some of the others on stage. Turandot’s wig also seemed a bit heavy and stiff compared to the rest of the cast, whose make up and wigs were excellent, particularly the “old age” hair and make ups, which were fantastic.

Choreographed moments were very tight and awe-inspiring when the entire cast was in movement along with the crescendos in the music. The combined lighting and textures of the stage, props and wardrobe was a successful sensory explosion. Although the stage was often full, it always remained aesthetically balanced, a real achievement with a large number of people — principals, chorus, dancers and supernumeraries — flowing in and out of it, a credit to the stage direction of Kathleen Stakenas.

The chorus, prepared by guest chorus master Lisa Hasson (in her Atlanta Opera debut), was excellent in their extensive role. The orchestra, under the baton of music director Arthur Fagen, was at the top of its game, sounding perhaps more splendid and energized than it ever has. A fine musical and theatrical showing overall.

(Stephanie Anderson contributed to this review.)