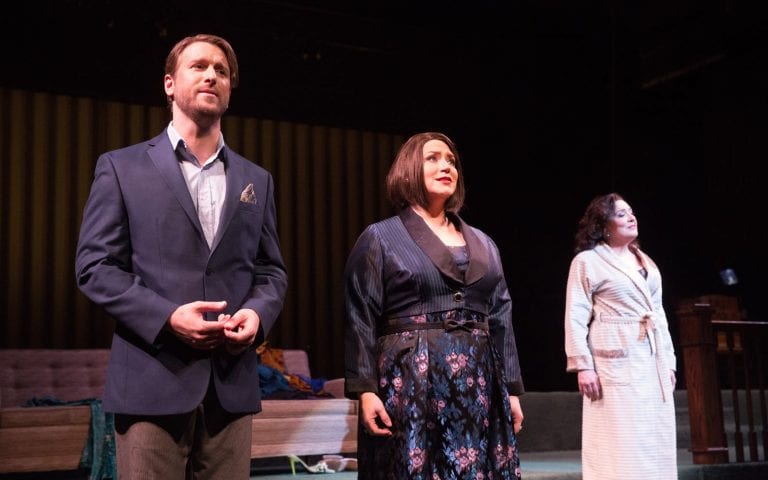 Jesse Blumberg (l to r), Jennifer Black and Theodora Hanslowe were especially exceptional as an ensemble. (Photos by Jeff Roffman)

This past weekend, The Atlanta Opera presented three performances of Three Decembers, a 90-minute opera with music by Jake Heggie and a libretto by Gene Scheer, based upon a play, Some Christmas Letters, by Terrence McNally. Heggie is also known as the composer of the operas Moby Dick (2010) — also with libretto by Scheer — and Dead Man Walking (2000), for which McNally was librettist.

Three Decembers was co-commissioned by Houston Grand Opera, which premiered it at the Cullen Theater on February 29, 2008 as a two-act opera under the working title Last Acts, with the role of Madeline Mitchell written specifically for mezzo-soprano Frederica von Stade.

It was subsequently presented by another co-commissioner, San Francisco Opera, under the current title Three Decembers. The three Atlanta Opera performances, which closed the company’s 2014-15 season, were intermission-less and represented an entirely new production of the opera.

The opera’s story is of a dysfunctional family and the attempts to reconcile a sole surviving parent with her adult children. Madeline Mitchell (sung by mezzo-soprano Theodora Hanslowe), is the widowed actress who has been more focused on her career than parenting. Her daughter, Beatrice (soprano Jennifer Black), finds herself in an unhappy marriage and takes solace through alcohol. Her son, Charlie (baritone Jesse Blumberg), is losing his partner to AIDS.

Three Decembers contains a significant share of anxiety and despair. But to their credit, Heggie and Scheer have included enough levity and brightness in the story to keep it alive, and at just the right time for relief — in particular, through the close and even playful relationship between siblings Beatrice and Charlie.

The action takes place across three Decembers, each a decade apart — in 1986, 1996 and 2006 — with Madeline’s practice of sending annual Christmas letters to her children serving as a central binding thread. It is Madeline’s final Christmas letter before her death, through which the children are able to emotionally reconcile their relationships with her, even if post mortem.

Overall, this new production, directed by Emma Griffin, was effective in its simplicity and did not distract from the singing and delivery of the texts. That was important because Heggie and Scheer have taken a fairly naturalistic approach to the libretto; that could have been lost had the production been overbearing.

All three of the singers sang splendidly and were well-suited to their roles. Significantly, they were exceptional when singing as an ensemble. A particularly poignant trio — although the characters were far apart, each in their own homes — was one of several high points in the performance.

There were places where the music aspired to memorable melody, yet fell just short of it, most often when a character was singing alone, through the fourth wall, to the audience. The dramatic emphasis seemed more in dialogue between characters.

For the greater part of the music, the vocal lines seemed a way of getting naturalistic, non-repetitive dialogue across in a musical but understandable manner, the orchestral accompaniment providing some help with musical continuity in underscoring these. Yet, all in all, the opera is musically and dramatically successful in a modest way.

The opera was staged at the Alliance Theatre’s 759-seat main stage at the Woodruff Arts Center. Scenic designer Laura Jellinek devised a three-tiered set, with a wallpaper-patterned drop serving as the back wall. A few pieces of furniture and props sufficed to support the staging. For one outdoor scene, a bannister on the second tier above the orchestra served as the railing of a bridge.

The chamber orchestra, mostly Atlanta Opera principals, was credibly directed by Steven Osgood, who led the performance from one of the two pianos in the pit, close to center stage. A second grand piano was immediately behind it, with the rest of the orchestra positioned to his right. This pragmatic, if off-center, configuration actually worked reasonably well for musical communication between Osgood, the orchestra and the singers onstage.

For the final scene, all drops were lifted to reveal the Alliance’s naked backstage. At first it seemed like a mistake, as if some scenery had failed to descend. But it soon became clear that Madeline had died. So perhaps the empty backstage was meant to represent a transition to the afterlife. The opera ended with her bathrobe-wrapped apparition walking toward a central backstage safety light as it slowly faded to black.