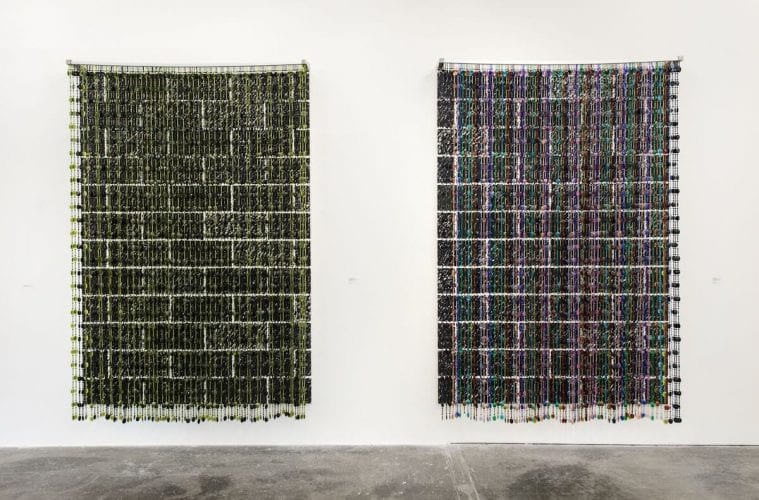 Is this the start of a streak?

Ending a string of lackluster exhibitions, the Atlanta Contemporary started the year with a home run — Lonnie Holley: I Snuck Off the Slave Ship — and follows suit with a recently opened trio of thoughtful exhibitions featuring the work of Paul Anthony Smith, Sascha Braunig and Ja’Tovia M. Gary. Though presented as solo shows, they relate to one another in ways both formal and thematic.

Smith emigrated from Jamaica to the U.S. at age nine, and the show’s title, Walls without Borders, alludes to the immigrant’s conflicted relationship with homeland and new country — that sense of belonging to both cultures, and neither. In a wall text, the New York-based artist also invokes W.E.B. Du Bois’ “double consciousness,” a term coined to describe the similarly fraught experience of being Black and American. Although thoughts about current events or experiences may prompt a particular piece, a will to acknowledge his overlapping African, Caribbean and American selves seems to be a subtext of the three major bodies of mixed-media works at the Contemporary. That theme is built into his process, a layering of images and marks that sometimes obscure, sometimes reveal the layers behind it. A found photograph is usually the base image. In his Building Blocks series, for instance, they are everyday images of Jamaicans. In another series, they are photos of a West Indies parade in Brooklyn. Smith overlays the photos with scrims of masonry walls, chain link fence, patterns inspired by African masks and textiles, and densely stippled passages made with a ceramics gouge. The layering poignantly suggests that time and fading memory (walls without borders) can be as much of a barrier as actual distance. In-betweenness is also embodied in the multiple meanings of recurring imagery. Walls obstruct and protect. Masks can hide and constrain, like the ingratiating social face African Americans wear in Paul Dunbar’s 1913 poem, “We Wear the Mask.” But they also allow a liberating anonymity and, as with the case of masks in African rituals, even transcendence.

Smith takes a different direction in the most recent series. In Blurred Lines, strings of beads curtain a canvas painted in rich scribbly black marks to masonry wall. Making for a lovely effect, the beads, which vary in hue from piece to piece, shimmer in light and move with air currents. He notes they are used to separate spaces in Jamaican homes and that the sound they make alerts occupants that someone is entering: walls without borders. Here, they beckon but part to reveal a dead end.

Smith’s pithy merging of form and content, command of his materials and ability to find the universal in the personal make him an artist to watch.

If Smith is in conversation with his history, Braunig is in dialogue with the history of Western art and its (her) discontents. In a 2015 article in Modern Painter, Braunig commented that she aspired to paint like the Old Masters. The lengths she goes to to create volume – modeling figures in clay, making props to paint from, carefully delineating light and shadow – indicate her seriousness about her craft. Yet Braunig tilts closer to the Surrealists, refracted through the vocabulary of digital animation. Her palette, dominated by metallic shades of yellow, gray, bronze and glowing neon oranges, is hardly naturalistic. The figures are as flat and boneless as Gumby, silhouettes with tubular outlines (borders?), and little more. The other elements are volumetric but not exactly actual things. And they float in a horizonless ground. The resulting instability of figure-ground perception adds to the already unsettling effect.

Despite the obvious artificiality, she succeeds, as do dreams, in making the implausible plausible. The voluptuous drapery folds in Cinch, for example, conjure Sophia Loren curves corseted in a metal cage.

Her figures, mostly women, regularly come up against a wall. In Free Peel 2 (2016), the protagonist moves away from the wall in a gymnastic backbend. Defeated? Stymied? It certainly doesn’t seem like triumph. Nor do the paintings that depict what looks to be a skin attached to tenterhooks — splayed across the canvas like a Christian martyr in a Renaissance painting.

Although the walls and hooks might metaphorically refer to any obstacle or constraining predicament, Braunig has suggested a feminist reading, that her narratives symbolize the status of women in art history and culture. “Unstable and unpredictable” fictional characters are private allusions, as are art figures like Dora Maar, who was known more as Picasso’s muse than an artist in her own right.

Braunig’s paintings are well-made and engaging but, to my mind, emotionally distant. One exception is Writhes (2017). The oblong format accentuates the squeezing sensation in this image of a figure about to be mangled or swallowed up by a cleaved shape that is both machine-like and anthropomorphic (two legs?), communicating the pain and even tragedy of her ever-thwarted characters.

In contrast, emotions are at the surface of Gary’s 2015 video, The Ecstatic Experience. The piece is a mash-up of found footage, including ’50s footage of a service at a rural Black church, civil rights demonstrations and the late Ruby Dee’s televised performance of a slave narrative. The Brooklyn-based artist disrupts the mostly black-and-white film with scratchy drawings made directly on the film and interjections of abstract patterns. There is something about the staccato line drawing and painterly frames that gives the older footage a contemporary urgency.

The title alludes to Black filmmaker Kathleen Collins’ 1982 film, Losing Ground, whose protagonist, a university professor, makes a study of ecstatic experience. In this video, the character played so powerfully by Dee psychically frees herself from slavery through spiritual transcendence, the only form of resistance available to her.

What follows this powerful climactic moment is a very different kind of resistance. As a choir accompanying Dee’s performance begins singing “The Battle Hymn of the Republic,” Gary segues to images of violent demonstrations. In one scene, for example, a demonstrator throws a fire bomb at a phalanx of policemen in riot gear. A color shot of a car in flames is a startling contrast to the black-and-white footage; it might administer a shock to viewers dulled by the profusion of these all-too-familiar scenes. That one might question whether the footage is from the ’60s or today’s Ferguson and Baltimore is a commentary in itself.