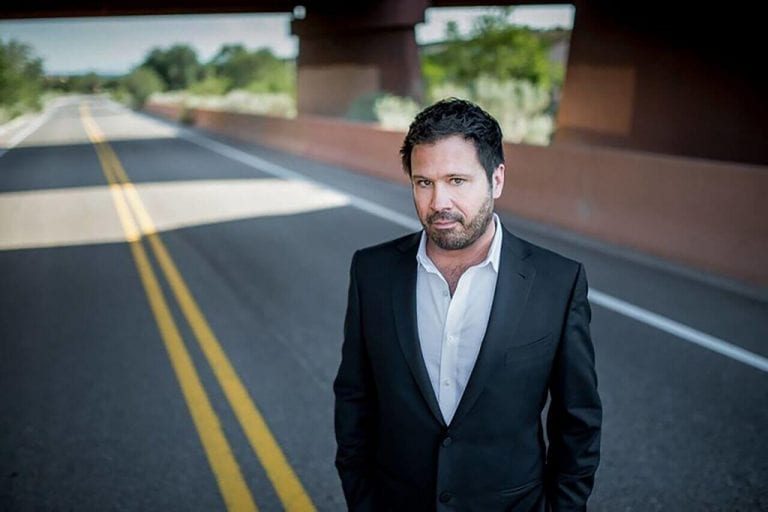 Daniels finally gets his wish to sing with the Atlanta Symphony Orchestra. (Photos courtesy of IMG Artists.)

David Daniels has quite a homecoming in store.

The world-renowned countertenor, who called Atlanta home for nine years, recently relocated to Ann Arbor to begin a full-time teaching position at the University of Michigan.

But Daniels will return to Atlanta to fulfill a longtime wish of singing with the Atlanta Symphony Orchestra, finally making his ASO debut May 11 and May 13 performing the lead role of Orfeo in Gluck’s Orfeo ed Euridice under the baton of good friend (and former neighbor) ASO music director Robert Spano.

Although it’s one of the roles that’s brought him the most acclaim throughout his career, Daniels has never released a full recording of the work: ASO Media will record the Atlanta performance, and to mark the occasion, the symphony has brought on director James Alexander to stage the special concert performance, visual artist Daniel Arsham to create scenography and Atlanta-based artist Lauri Stallings to choreograph dance.

ArtsATL rang up Daniels at his new home to chat about plans for the upcoming Atlanta appearance.

ArtsATL: Hi, David. How is life in Ann Arbor?

David Daniels: It’s okay. You know, it’s a new life. It’s exhausting. I love teaching. I love my studio. But I miss Atlanta. I miss Atlanta a lot, but I’m happy here. The life of teaching as opposed to traveling and singing, it’s just a different amount of energy.

Daniels: Oh my god, I would go nuts if all I had to do was teach countertenors. No. I’ve got all voice types. I’ve got a 20-year-old bass who’s going to be a young artist at Wolf Trap this summer. I’ve even got six musical theater students, as well.

ArtsATL: It will be quite a homecoming for you: making your ASO debut, working with Spano, recording Orfeo for the first time. What are your thoughts as you prepare for this milestone?

Daniels: I’m glad school’s been out for a week so I can concentrate on practicing and singing and not be exhausted. Julius Caesar and Orfeo are probably the operas I’ve sung the most. I’ve always wanted to record Orfeo. Even the years I was recording exclusively with Virgin Classics-EMI, I was never able to record it. This is so exciting because I’m finally recording with a cast that is so fantastic, with the wonderful Atlanta Symphony Orchestra and Chorus and with my good friend Robert Spano. This is just perfect. I love recording live opera. I think it’s so much more exciting than the studio.

ArtsATL: My understanding is that you pretty much hand-picked the soloists you’ll be performing with. Is that right?

ArtsATL: Have you sung these roles with these sopranos before?

Daniels: Not with Janai, who’s singing the role for the first time. I did sing Orfeo with Susanna Phillips at Minnesota Opera probably eight years ago. I just love Susanna’s singing, and we’re good friends. She’s singing all the over the world now, and I think she’s fantastic in the role.

ArtsATL: This will be your first time working with Robert Spano, but you’ve known him a long time.

Daniels: We’ve been friends forever. We lived on the same floor in a Midtown loft building in Atlanta. That’s how we really got to know each other because I lived with him in the same building for nine years. We knew each other but never worked together.

ArtsATL: Was he a good neighbor? Did he blast Tchaikovsky late at night?

Daniels: We were on the same floor but opposite ends. He had a corner loft, so he could be as loud as he wanted.

ArtsATL: How did you first realize you were on the same floor in the same building? Or was it more a matter of your moving to town and saying, “Well, where does Spano live?”

Daniels: Yes. I was stalking. No. I looked at a ton of places, and I didn’t like the high-rise lofts in Midtown. I talked to the building manager at the loft building, and that was that. Spano just happened to be living in the same building. I had no idea.

ArtsATL: And you just became good friends bonding over classical music, that sort of thing?

ArtsATL: What do you admire about Spano’s conducting, and why are you looking forward to having him conduct Orfeo for your recording?

Daniels: He’s an incredible musician. This piece was new to him. He flew here to Ann Arbor about two weeks ago, and we worked through it. He told me that he’s absolutely fallen in love with it because Berlioz loved Gluck. And Robert loves Berlioz. He’s passionate about the piece now, which I knew he would be. My husband and I went to ASO concerts all the time. I have many lifelong friends who are in the ASO Chorus. Jeff Baxter, the choral manager, and I went to Cincinnati Conservatory together. I’ve known Jeff for a long time.

ArtsATL: How would you explain the challenges of singing Orfeo to someone who doesn’t sing?

Daniels: Stamina. It’s an 85-minute opera. We’re doing it with no intermission. There are three acts — not long acts, obviously — but I start singing at the beginning, and I don’t stop. I get a little rest when the sopranos have one aria each.

ArtsATL: Is it a challenging role to act?

Daniels: Yeah. It’s tough in that the story line itself makes it difficult. I’m bringing her back from the underworld. I’m told by Amore that I can bring her back, but I can’t look at her. And I can’t tell her why I can’t look at her. In that way it’s challenging in that a lot of acting has to be done feeling Euridice behind me and not looking at her, yet speaking to her.

ArtsATL: Gluck originally wrote the role for alto castrato. In older recordings and 20th-century performances, the part of Orfeo was played by a woman, a mezzo-soprano. But with the recent ascendancy of countertenors, it’s often being played by men again. Do you think there’s something a male performer can bring to the role of Orfeo a woman can’t?

Daniels: If the male countertenor is really good. I’ve always said I prefer a really good mezzo to a really bad countertenor. I have no issue with it. There are so many versions of Orfeo that Gluck wrote, and he wrote it for so many different types of voices. We’re doing the original version, the Vienna version. Gluck’s thing was to take all of those 17th-century Handel frills and ornamentation and all the extra things in Baroque opera and to make it as plain and full of heart as possible.

ArtsATL: Do you have a favorite moment in the opera, something you particularly look forward to singing?

Daniels: My favorite part is in the beginning of the second act. I’ve made up my mind to go into the underworld to get her, and I have to get past all of the furies and all of the demons. I try to sing to them and play my lute to calm them and let me pass. Once I get into the underworld, I sing an aria called “Che puro ciel.” It’s just seeing all the beauty that’s down there, and it’s just incredibly orchestrated with the flute and cello and a big oboe solo. That’s my favorite part.

ArtsATL: What’s next for you after Orfeo?

Daniels: In the middle of rehearsals for Orfeo, I’m flying back and forth between New York and Atlanta. I’m singing in the Met Opera’s 50th Anniversary Gala. It’s 50 years since they moved to Lincoln Center. I’m one of 50 singers that are singing on that. I go to New York to rehearse May 3–4, fly in the evening to Atlanta, rehearse there May 5–6, and fly back to New York to sing May 7, then fly back to Atlanta on May 8 for 1 p.m. rehearsal. I’m going to be a tired boy because both projects are so important to me. I’m glad that we could work it out. After this concert I’m touring the world. I’m doing a concert at the American Embassy in St. Petersburg, Russia. I do a tour of South Korea. Then I’m in Santa Barbara teaching at the Academy of the West.

ArtsATL: You said you miss Atlanta. What do you miss most? What’re you looking forward to doing when you get back?

Daniels: I miss the restaurant scene. And the Atlanta Symphony concerts. And I miss my Braves. I look forward to seeing the new stadium when I’m home. Our regular restaurant where we lived three nights a week was Ecco. We always valet parked even though we lived a block and a half away. We knew the managers, and we knew the bartenders and servers so well. It’s our home away from home, so I’m looking forward to going back.