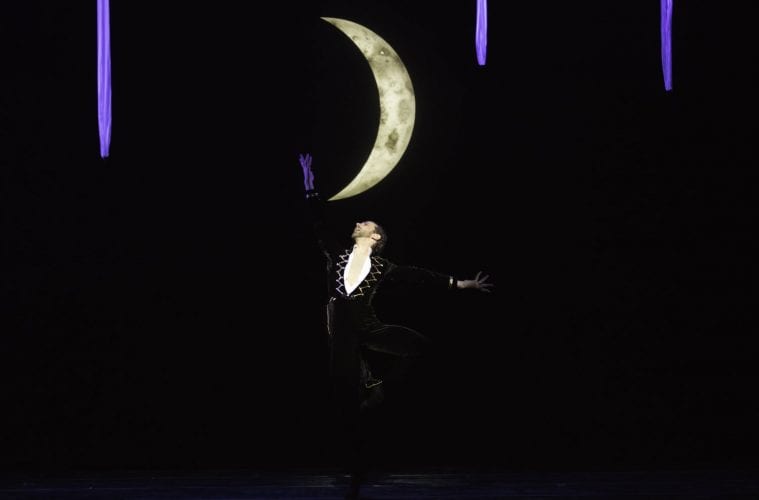 Five years after its much-anticipated world premiere, Twyla Tharp’s The Princess and the Goblin has returned home. Created for Atlanta Ballet in 2012 and co-commissioned by the Royal Winnipeg Ballet, Tharp’s take on George MacDonald’s 1872 fairytale of the same name hits all the family-friendly high notes: good defeats evil, cute kids skip in tennis shoes, not-so-scary goblins cut up, and a beautiful princess saves the day. It premiered last Friday at the Cobb Energy Performing Arts Centre.

Adults appreciated the princess’ power as a woman but perhaps cringed at where that power originated: pointe shoes! Learn to dance in them and you too can defeat the lowly bare-footed monsters! We’ll get to that later.

Luckily, as with many of Tharp’s themes, it’s not that simple. Her Princess and the Goblin portrays a world that mirrors the current dichotomy in ballet: classical or contemporary, pointe shoes or none, plotline or abstraction. Even the movement — upright and satisfyingly haughty for the royalty, gnarled and grotesque for the goblins — literally embodies that dichotomy, presenting a microcosm of Tharp’s long-held artistic stamp. 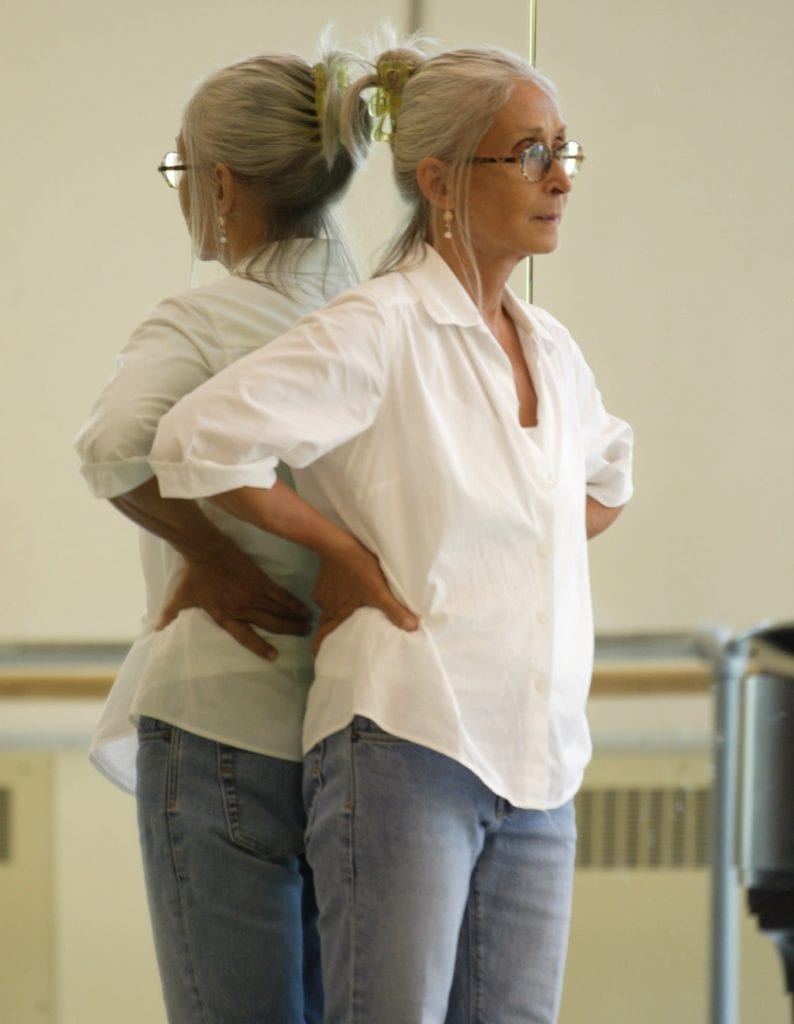 Tharp in Atlanta in 2011 working on The Princess and the Goblin. (Photos by Charlie McCullers)

Considered one of the greatest and most prolific living choreographers, Tharp’s career spans more than five decades, and she has won nearly every award available to a dance-maker. Track her work’s evolution over time and you’ll find shifts that parallel the changing face of dance in America. Mixing styles — especially fusing classical ballet with a floppy, too-cool-for-school vibe — has always been her thing. Coupled with a keen musical sensibility, Tharp has moved through the decades with an unusual ease, adapting and shaping her work to fit–and sometimes dictate–public tastes.

In her Princess and the Goblin, Tharp proves especially good at characterization, though her storyline diverges from the original considerably and simplifies the complex narrative to just a few major themes. Through Irene, danced with lovable grace and precision by Alessa Rogers, we see a “child” (Rogers is a full 20 years older than MacDonald’s Irene but embodies all of her wide-eyed, childlike curiosity) learning from her elder and gaining confidence to move through the world with independence. As Irene’s great-great grandmother, Nadia Mara, usually a sparkling presence on stage, was surprisingly one-note in comparison, though I appreciated Tharp’s focus on the importance of this relationship.

Though the narrative provides the perfect set-up for ballet, many of the duets and trios felt superfluous, even bland. In those moments, Tharp underutilized Richard Burke’s lovely score, comprised of music by Franz Schubert. For a fantasy ballet, Tharp’s reliance on traditional classicism didn’t quite work: the steps were too soft, the partnering too careful.

Caleb Levengood’s complicated set design, which seemed to change with every one of the ballet’s 16 scenes, provided a sometimes gorgeous, sometimes visually overwhelming landscape. A wall of raised black steps upstage created a sense of separation, often between the goblins and the humans, while the overhead scene — which rotated from white sheets to ropes to strips of fabric — placed us squarely in this supernatural world. But paired with Anne Armit’s costumes for the goblins — floppy, multilayered things laden with strips of fabric that fly every which way when then move — it was often hard to see the movement’s rich detail.

Despite the cumbersome costumes, all of the goblins were great, notably Heath Gill and Christian Clark as mischievous guards for the Goblin King and Queen. Tara Lee’s slinky, steel-gazed entrance as the Goblin Queen was especially memorable. It offered a visual contrast and balance to the frightened goblins, holding lamps and huddling for warmth and protection on the opposite side of the stage. 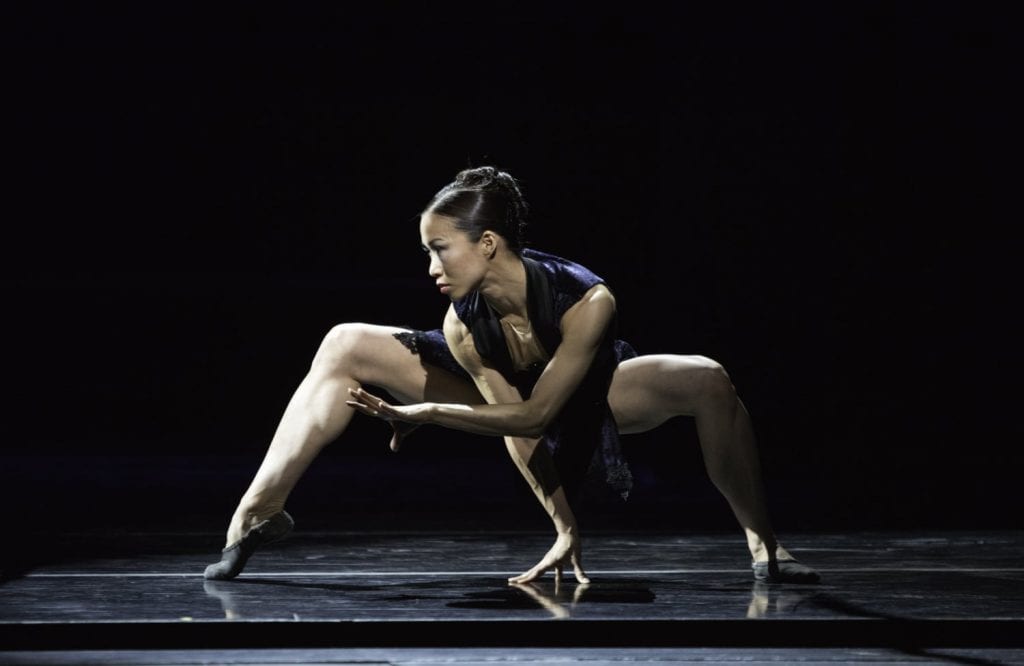 In one particularly funny scene, the King (danced with arrogant creepiness by newcomer Jordan Leeper) and Queen (impeccably danced by the ever-regal Lee) performed a self-satisfied duet as our heroes tried to escape, hidden behind a band of goblins. Amidst the chaos, Gill and Clark showed off their acting chops, their wild gestures and raucous banter as clear as if they were speaking. It was pantomime at its best.

MacDonald’s goblins are a deformed, subterranean race with tender, toeless feet, and only their Queen is important (human?) enough to wear shoes. Tharp’s not-so-subtle interpretation of MacDonald’s “shoes” to mean “pointe shoes” knocks some of the wind out their symbolism. It’s an easy pill to swallow, but it’s too simple and glorifies the pointe shoe in way that feels somewhat out-of-touch, elitist and even ironic. The majority of the ballet’s interest lies in Tharp’s choreography for goblin and child; the classical moments fade in the memory much more quickly. 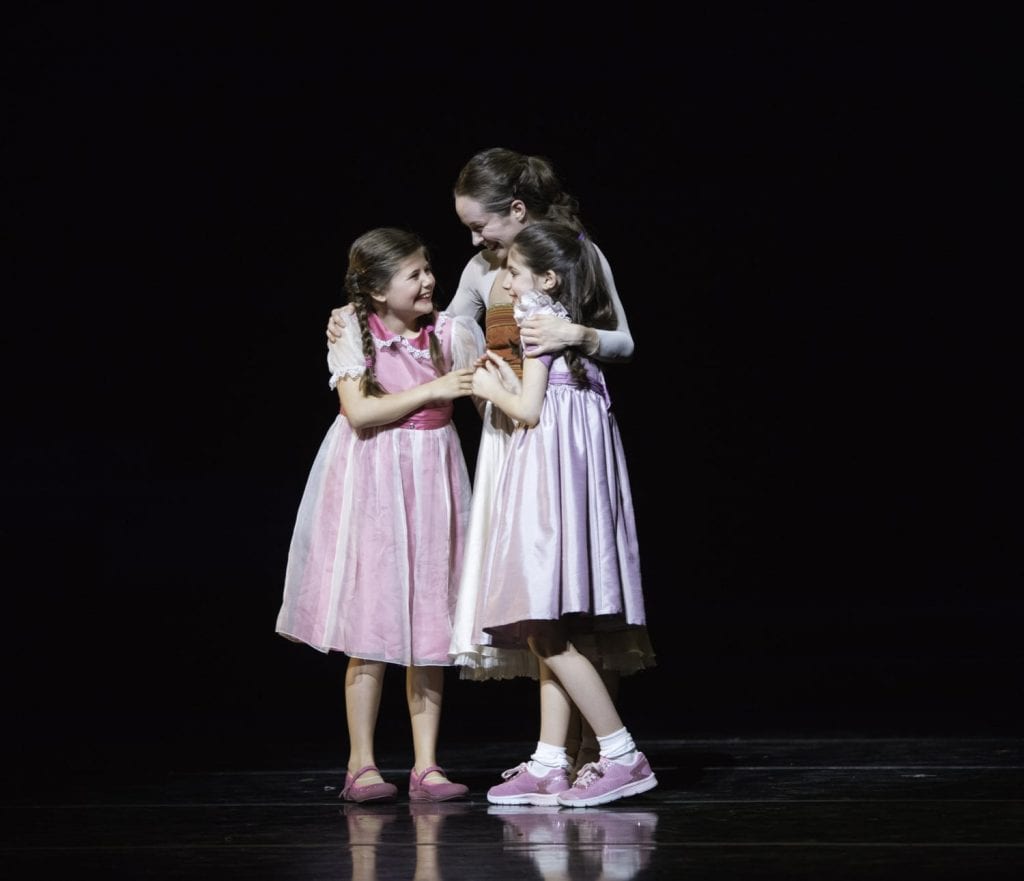 The student dancers (shown with Alessa Rogers) brought a vibrance to the performance.

John Welker’s King Papa, uppity and cold, provided a nice contrast to Benjamin Stone’s wonderfully naïve Curdie. In one scene, Curdie bravely fought the goblins and broke down from exhaustion — hair and clothes loosened from the effort — as he realized he was outnumbered.  His face gathered in tight-lipped frustration, yet his turns and leaps remained precise and energetic. The contrast spoke volumes: here is a boy who refuses to give up. Rogers danced with the same childlike gusto and brashness, as if to laugh in the face of adults who think their problems are bigger.

Thirteen children (chosen from the Atlanta Ballet Centre for Dance Education), who eventually prevailed over the adults, infused the work and provided a much-needed relief from all that classical vocabulary. Tharp gave them smart, kid-driven choreography complete with jumping jacks and skips. I loved watching the little ones work so hard to keep up as they flew across the stage alongside company members.

It was this nod to power of childhood and the importance of persisting even when others don’t believe you — both prominent themes in MacDonald’s book — that drives the ballet and infused it with lasting impact.