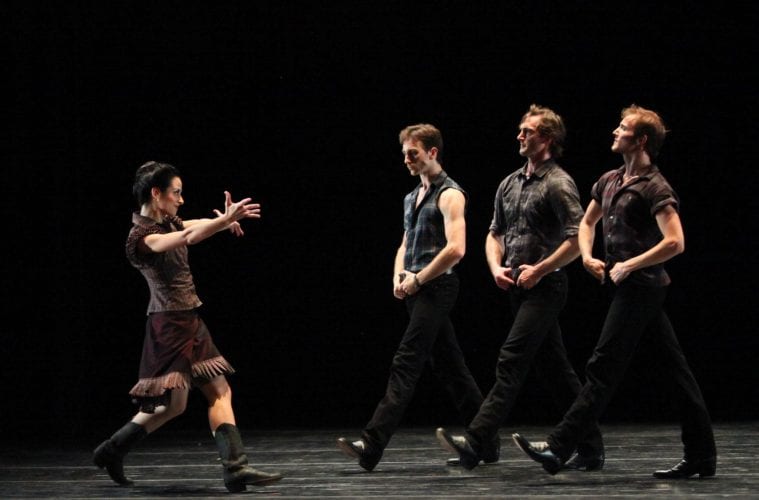 Review: Atlanta Ballet dares to walk the line with emotional, stark “The Man in Black” 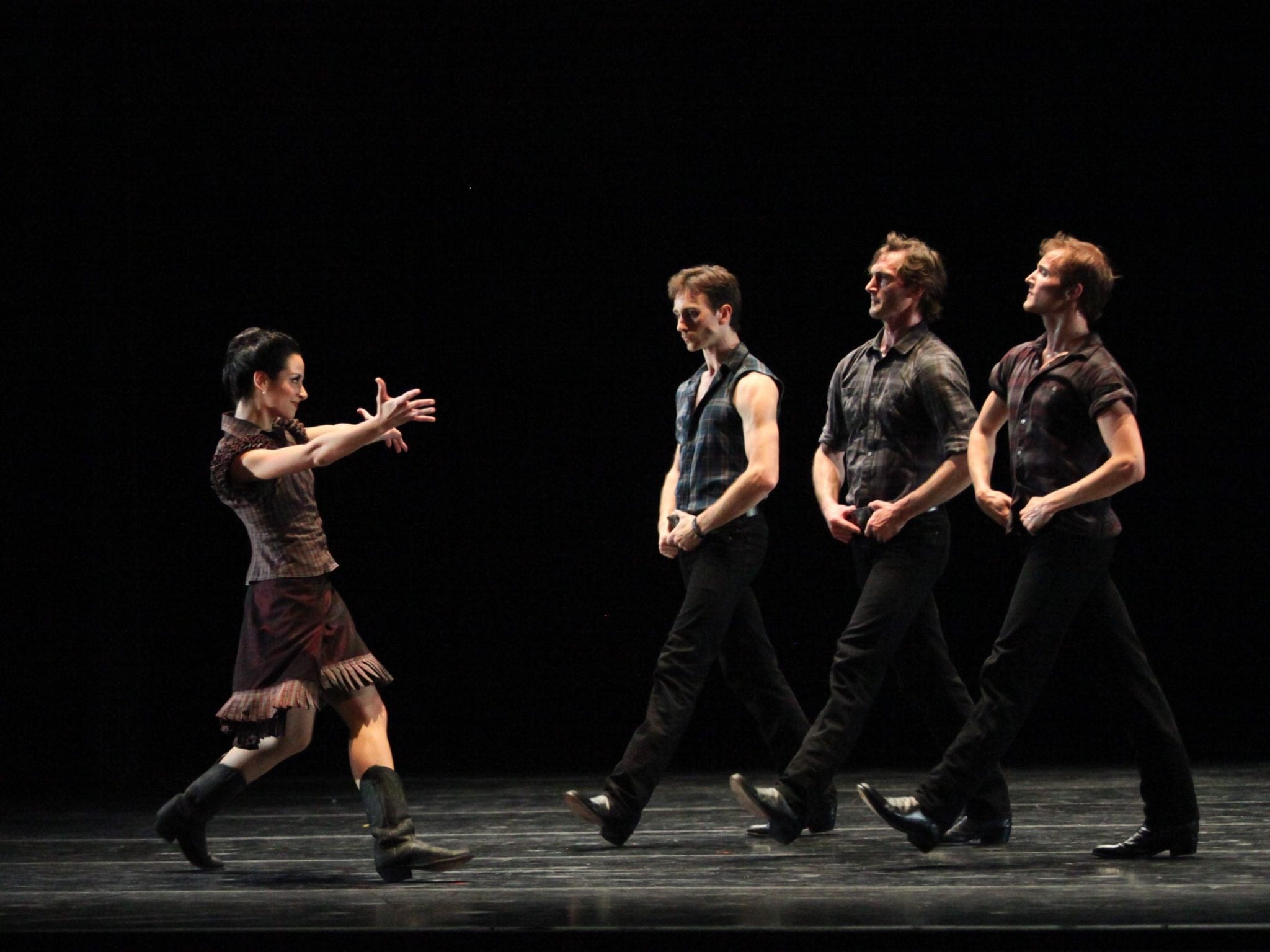 Cowboy boots, sneakers and slippers. In Friday night’s opening of Atlanta Ballet’s contemporary triple bill, “The Man in Black,” not a pointe shoe was seen in the house. It’s the first time in Artistic Director John McFall’s memory — and probably in the company’s history — that Atlanta Ballet has produced a concert with all works off pointe.

And if this was a limiting choice for each of the three choreographers — Jorma Elo, Juel Lane and James Kudelka — it also freed them to pursue divergent interests, offering examples of what sets the trends and what is trendy. And in the case of Kudelka’s tribute to country music legend Johnny Cash, it offered the freedom to create a work with such emotional immediacy, bare-bones honesty and integrity of craftsmanship that it becomes timeless.

Except for occasional splashes of color in the lighting, a monochromatic palette of black into silvery gray gave the evening a stark tone. In Lane’s case, black minidresses and street clothes seemed stylish and cool. Kudelka’s black western wear, elegiac, suggested also the darker side that humans possess but seldom acknowledge. Elo’s sleek, silvery gray costumes evoked at times an icy northern landscape, at others taut, metallic strings on an electric guitar, as he suggested in a pre-curtain video sound bite, which inspired a young Elo and led him to appreciate classical music and dance.

Lane, who returned to his home city of Atlanta after six years as a dancer in New York with Ronald K. Brown/EVIDENCE, made his mainstage debut with Atlanta Ballet on Friday. The 30-ish dancer-choreographer created the initial piece for the company’s Wabi Sabi outdoor performance at the Atlanta Botanical Garden last fall.

Between dancing with New-York-based choreographer Camille Brown and teaching at his alma mater, the University of North Carolina School of the Arts, Lane created “Moments of Dis,” to music by Atlanta-based Quentin Johnson. The piece has three sections: “Discombobulated,” “Discipline” and “Discernment.” 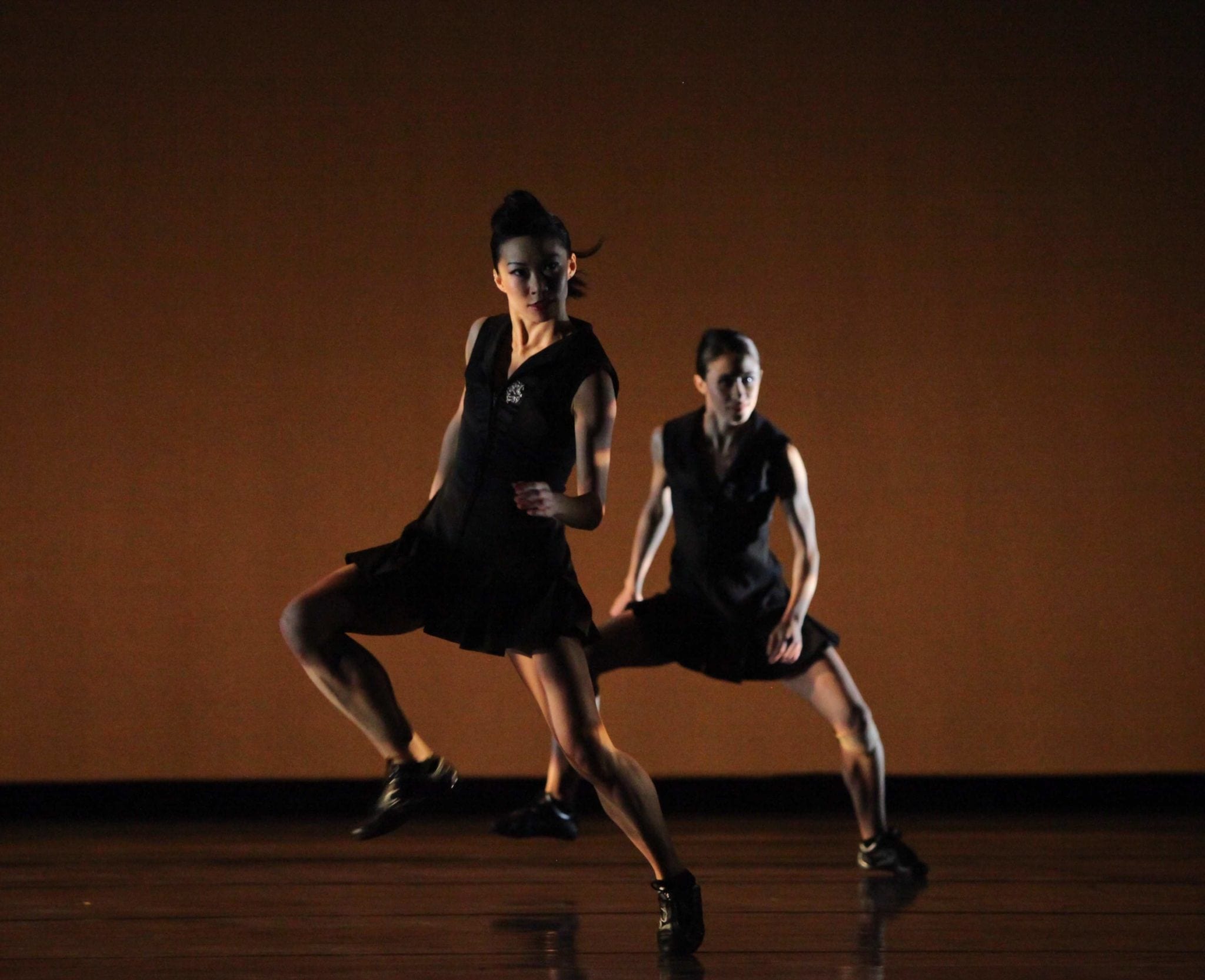 Tara Lee (left) and Nadia Mara in "Moments of Dis" by Juel Lane.

Johnson’s music evoked a dance club atmosphere and drove the whole piece, often overpowering Lane’s choreography. But Lane’s vocabulary was fascinating to watch. It blended the rigor of ballet with the grounded quality of hip-hop, plus lots of fast gestures and seamless transitions into and out of the floor. The moves were performed with polish and exuberance.

In a striking solo, Rachel Van Buskirk expressed what seemed a young artist’s frustration and confusion. She reached an arm out, then pulled it back with the other. Her chest burst open, arms exploding outward, as if her energy and emotion could not be contained; her torso curved and pulsed fluidly to the music’s strong beat.

This is likely Lane’s largest-scale and most ambitious work. Its strength is his inventive moves, its weakness his reliance on high-tech, club-style lighting effects, complete with fog and colored patterns projected onto the floor. This sleek packaging gave it a commercial quality, which no doubt appealed to much of Friday evening’s enthusiastic audience. But I would like to have seen this piece, with its multiplicity of moves edited down, in simpler clothes, back in the garden.

Kudelka recently told me that, while he has spent most of his adult life in ballet companies in cities, he grew up on a farm in Newmarket, Ontario, and loved the farm and especially the horses. Not long ago he got back on a horse; he didn’t want to find himself, one day near the end of his life, without ever having ridden again. And he translated the sound and feeling of riding horses into parts of “The Man in Black.”

At one of many levels, this quartet may reflect a desire to return to that rural culture, to simpler times. But the work also shows Kudelka’s deep and subtle understanding of human relationships and his mastery of craft. Set to six songs recorded for Rick Rubin late in Cash’s life, four characters move as a tightly knit community. Kudelka draws from line, square, swing and step dancing, with choreography layered and woven into Cash’s simple but deeply moving songs.

In a striking beginning, the dancers, in cowboy boots and black western wear — the three men in jeans and plaid shirts, Lisa Barrieau in a flounced short skirt — swayed in silence. Their timing, a little slower than what is natural, evoked a dreamlike, weightless feeling, infused with a subtle and penetrating sorrow.

Each line, circular or serpentine pathway revealed another facet of their intertwined lives. Gestures, repeated, grew in meaning — pointing at someone in a crowd, pointing at the forehead as if talking about one’s mind, or, in a dreamlike sequence, pointing a gun at one’s head. In the opening, dancer Jacob Bush, as the odd man out, tried to contain his inner fury — he clasped his hands as if to suppress the eruption, and this was later echoed with the four dancers in a line dance. A simple hand clasp gained layers of meaning.

This was Kudelka’s second work with Atlanta Ballet. He and McFall have known each other since 1981, when Richard Englund commissioned new works from each of them for Ballet Repertory, what was then American Ballet Theatre’s second company. Kudelka is a good fit for Atlanta Ballet, which shares a similar background in the classical traditions of both the Royal Ballet and George Balanchine, with a focus on the contemporary.

The moment when a bow touches an instrument’s strings, the moment when friction sparks sound, seemed to ignite Elo’s “1st Flash,” the evening’s finale and perhaps one of the most technically demanding works these dancers have performed. This abstract ballet is set to Jean Sibelius’ Violin Concerto in D minor, part of Elo’s Finnish cultural tradition. 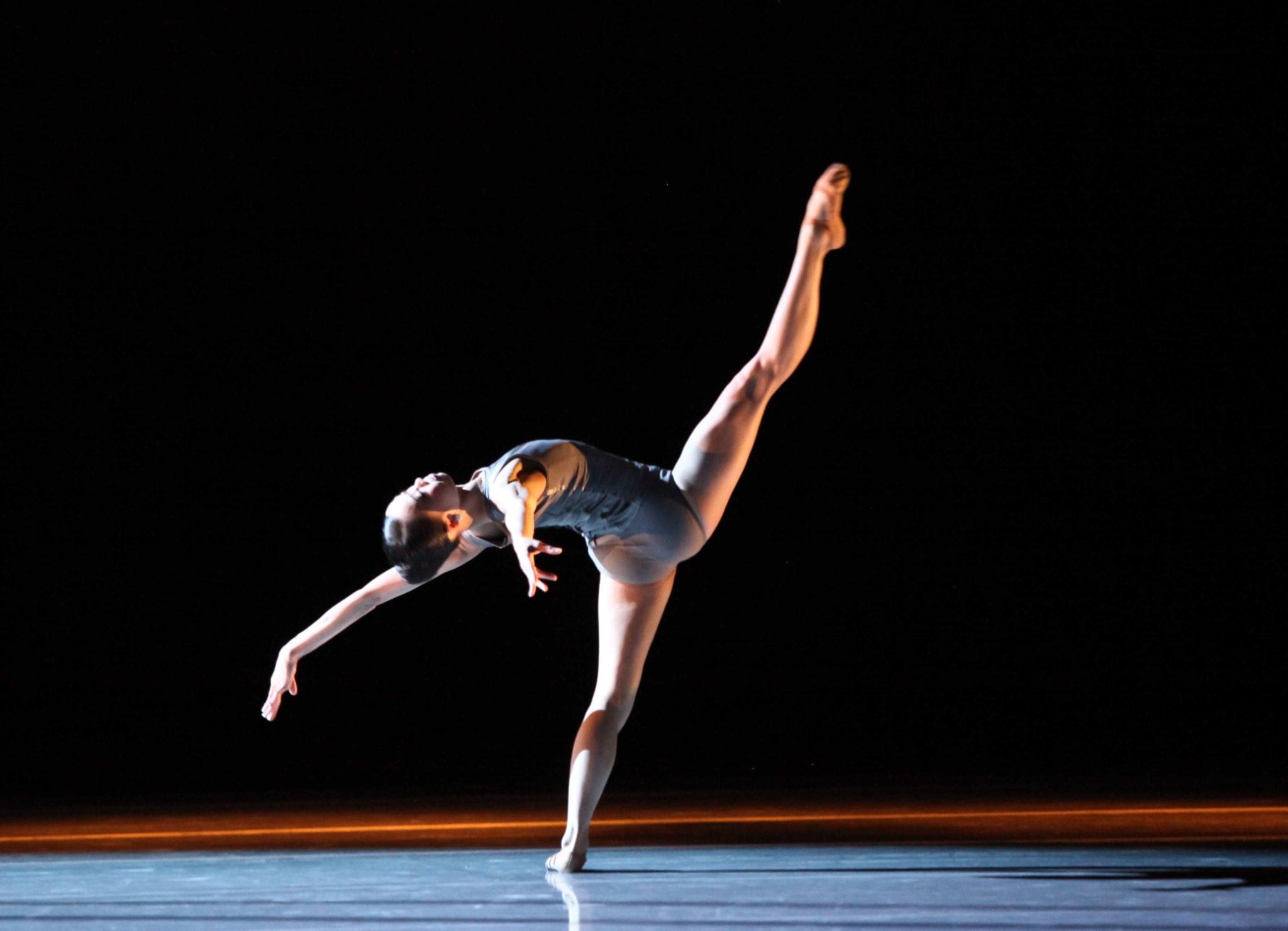 Peng-Yu Chen stretches out in "1st Flash" by Jorma Elo.

Elo met the composer’s well-known concerto with ultra-modern, lightning-fast moves. Quirky gestures — as if plucking strings on a harp or bass violin, mixed with high-speed extensions, leg circles large and small and the criss-crossing of lines with curving torsos — were a contemporary take on classical ballet’s geometry.

Dancers Peng-Yu Chen and Nadia Mara rose to the occasion, showing distinctive gifts for the quickness the piece demands. Mara’s speed and precision were underscored by a softness that was utterly engaging. Chen has honed her sense of attack but has stripped away the fierceness, leaving a new feeling of purity and fearlessness.

Influenced by Jiri Kylian but with his own quicksilver style, Elo has set the pace for much of what is happening in contemporary dance today. In welcome contrast, Kudelka’s subtle use of human sensibility bucked the trends.