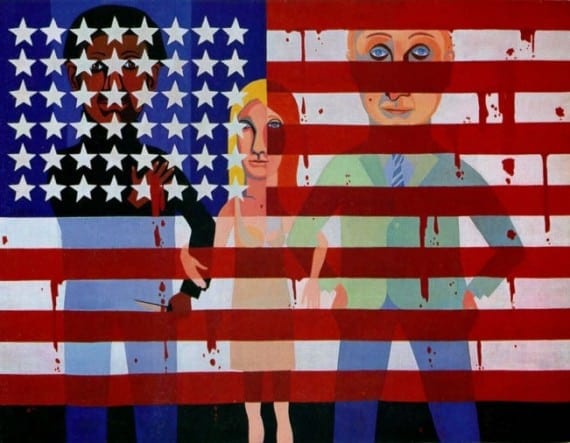 If you know the work of Faith Ringgold, you will immediately recognize “Groovin’ High,” hanging in the foyer of the Spelman College Museum of Fine Art, as one of her signature story quilts. The title, taken from a 1945 Dizzy Gillespie hit, also applies to the frieze of dancers she depicts, locked in immortal rhythms of good times. But there is another side to this Harlem-born and bred octogenarian, and it is the subject of “American People, Black Light: Faith Ringgold’s Paintings of the 1960s,” at the museum through May 19. These rarely shown works illuminate her political awakening through the civil rights and feminist movements of the ’60s and how those volcanic times shaped her art.

As I wrote in the AJC, the exhibition documents a building anger that would erupt in 1967 both on the streets and in large-scale canvases such as “American People Series #20: Die,” a “Guernica” of sorts depicting the violence happening across the country in a bloody tableau. Ringgold also took her art into the streets in political posters supporting Angela Davis and other black leaders. But she also addressed ideas more indirectly in her “Black Light” series, in which she explored a palette based on black and adapted masks and textile patterns and rhythms used in African art. (If “Black Light” symbolized “black is beautiful,” it was also influenced by Ad Reinhardt’s black paintings. Maybe even a rebuke to the art about art. Compare Ringgold’s “The Flag Is Bleeding” to Jasper Johns’ version of the same.) “The Black Light Series: Party Time,” which captures the fashions of the day and the good time, suggests that she was discovering that self-representation was another form of political advocacy and that speaking softly — as in the folky style and comforting form of her story quilts — might be a more successful vehicle than a big stick. The values forged in the ’60s continue to pervade Ringgold’s oeuvre. “Groovin’ High” is as much a “history painting” as “Die.” And the little girl’s dream of flying in “Tar Beach,” a magical children’s book based on her experiences of Harlem summers, is a dream of liberation that goes as far back as slave myths.