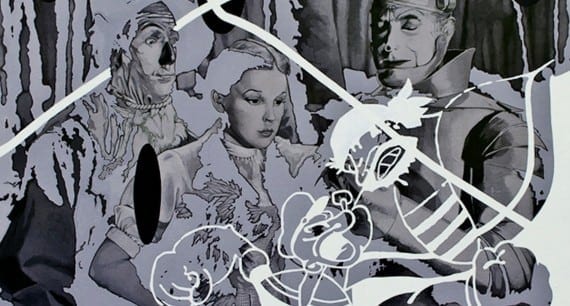 The paintings in “Some Sort of Solitude,” Tommy Taylor’s exhibition at Whitespace gallery through March 31, bring together the innocence of childhood and real-world concerns for a refreshing clash of imagery. Cartoon characters, boyhood sexual fantasies and family history all vie for space in dreamlike narratives that reveal Taylor’s fascination with the conflicting motivations, meanings and rationalizations that characterize modern life.

In these works, Taylor, who was included in “Movers & Shakers: MOCA GA Salutes the Rising Stars of the Georgia Arts Scene” in 2011, returns to figurative painting after 14 years of abstraction. While these works still contain the signature colorfully kinetic shapes evident in his mural on Elizabeth Street in Inman Park, he now layers them among images recalling family, friends and places of his past.

We recently spoke with Taylor about his work.

Tommy Taylor: For some time I have been wanting to make some work that functioned in a different way than the abstract work, something that told some sort of a narrative, even if it was non-linear. But I didn’t want to be bound by a rigid concept that would be limiting visually or conceptually. I wanted it to be wide open…. I just did not know what this would be.

I had been writing down ideas and doing thumbnail sketches for years. This new work was brewing for a long time before it finally clicked for me. But once I finished the first painting, the others followed easily. Ultimately, I think the abstract work … informs this work. These new paintings would be very different had I not been working non-objectively before now.

ArtsATL: Your style often dispenses with traditional visual cues in favor of a more multidimensional approach. How did this evolve?

Taylor: These paintings speak to the many levels at which an event or circumstance can be experienced. Often my emotional response to day-to-day life can be confusing. It seemed necessary to present this in a manner that was challenging and illogical visually. ArtsATL: How does the complex layering affect your process?

Taylor: Unlike the abstract work, which is an improvisational exercise with brush in hand, these paintings are composed in advance of the painting process. The bulk of the creative process — the composition, color, scale, free association and image choice –happens before I approach the canvas. Due to the complexity of the arrangements, I then work in a fairly ordered process, layer by layer until complete. But there are always decisions to be made along the way.

ArtsATL: What are the source materials that you use for inspiration?

Taylor: Some of the imagery was friends’ family photos. I did spend many days in various libraries throughout the city. But much of the imagery came from the Internet. The paintings start with an idea, sometimes vague, that would progressively come into focus as the images were discovered and arranged. The Internet was useful in that I could chase down one idea, which would lead to an image that would lead to another and another rather quickly … down the rabbit hole, as it were.

ArtsATL: What sorts of reactions or emotions are you interested in evoking in the viewer, or are they irrelevant?

Taylor: Far from irrelevant. I think the viewer’s response is integral to the completion of the work. I would hope that the initial response might be one of curiosity or puzzlement. In the end, these paintings are about loss and love and struggle. For me they elicit a sense of solemnity and wistfulness…. I would hope this might be evoked in the viewer as well.

ArtsATL: You seem to be inspired by paradoxes: meaning vs. incoherence, innocence vs. depravity or violence, symbolism vs. reality, and so on. Can you elaborate on this?

Taylor: Pick up a newspaper and open it. Next to an article about a terrorist act or war, there is an ad for diamond necklaces or a cruise. This is an aspect of our contemporary world.

Many years ago, I had an extreme fear of flying. It was suggested to me that what I was suffering from was a fear of not being in control. This sounded absurd to me, because certainly I would not want to have the responsibility to fly the plane. But is was true. And it is as true as the idea that I really have control over anything in this world is false. These things fascinate me.

ArtATL: Who are the artists who continue to inspire you the most?

Taylor: Certainly that list changes over time. Contemporary artists who inspire me are Karim Hamid, Inka Essenhigh, Kara Maria and Christopher Wool. I appreciate a lot of graphic art and I have a fascination for Indian miniatures. Then there are the late great artists such as de Kooning, Sargent, Twombly, Bacon, Polke and Tapies that will always inspire me.

ArtsATL: What does the future hold? Taylor's "Remember When You Were Young"

Taylor: I look forward to making more of these paintings, but for the time being I am working on some new abstracts. Currently, I have been accepted to an artist residency outside of Assisi, Italy, which, if all goes according to plan, I will be attending in May. In conjunction with the residency I will be in a show in Assisi in December of this year.

I am a novice surfer and wondered if there are good places to surf while in Italy. As it turns out, the best longboard wave in Italy is in nearby Anzio. Anzio was the site of a very important and hard-fought amphibious landing by American forces during World War II. The same conditions that made that a perfect place for a military landing also make for great surfing…. How’s that for a paradox?