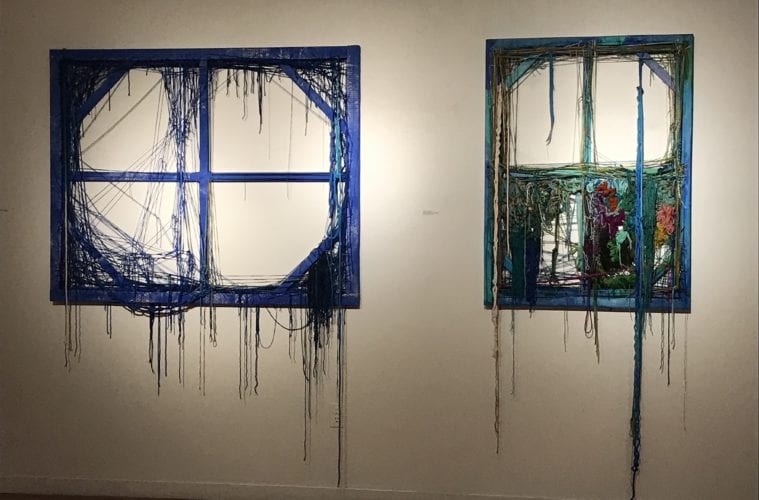 At Chastain Arts Gallery, puzzling, rewarding I Am Both digs into dualities

Chastain Arts Gallery describes the two-person I Am Both (through March 9) as being about the “ideas and themes of duality, of systems that bridge personal and public, and the meeting of past and present.” Statements by artists Sonya Yong James and Trevor Reese reinforce what, at first impression, can seem slightly intimidating.

The show, though, offers considerable visual pleasure, which offsets its somewhat daunting conceptual agenda. James, in particular, interprets the meeting of past and present by combining old and new materials, an operation that’s largely invisible to a casual viewer. On the other hand, the impact of, say, the intense blues in the paired works Blue is the hottest part of the flame and Blue night window is immediate and stirring. Similarly, the mingled shades of black in Ember — made of pigment, cord and parts of a burnt pine tree — plus the sculpture’s scale and complexity elicit a powerful aesthetic response.

The complexity of Ember’s tangled and stretched cords, and the twists of multicolored yarn that become a subtle counterpoint to Blue night window’s dominant shade, suggest a symbolic interplay that stretches beyond simple enjoyment. There’s much to look at and much to think about.

The stark verticality of Trevor Reese’s black wooden columns in the center of the room provides a rush of perceptual delight, but the immediacy doesn’t last long. An object is attached to each column and a letter of the alphabet is formed by its base.

In his sculptures, Reese is curious about what might result from setting up possible expectations and actual relationships between object and viewer and between text and reader in an accompanying handout that contains the letters of the alphabet on one side and enigmatic sentences keyed to the letters on the other.

The mix of texts undermines any attempt at systematic interpretation. For example, “F — day in, day out, he peers into deep, dark holes in the earth looking for entrances to caves and underground waterways”; “I — the words ‘shoes’ will never levitate”; “J — which is why the plot of every book ever can be boiled down to ‘someone is looking for something.’” Excerpted like this, “F” and “J” seem related, but peculiar assertions and observations come between them. A word that will not levitate?

The handout is an independent artwork. Any effort to establish a clear correlation between it and the objects on the alphabetical sculptures is frustrating. Alternately, some of the objects on the lettered sculptures suggest the kinds of equivalences found in children’s picture books: the column with the base shaped like an “E,” for example, holds a clearly labeled “Emergency Blanket.” 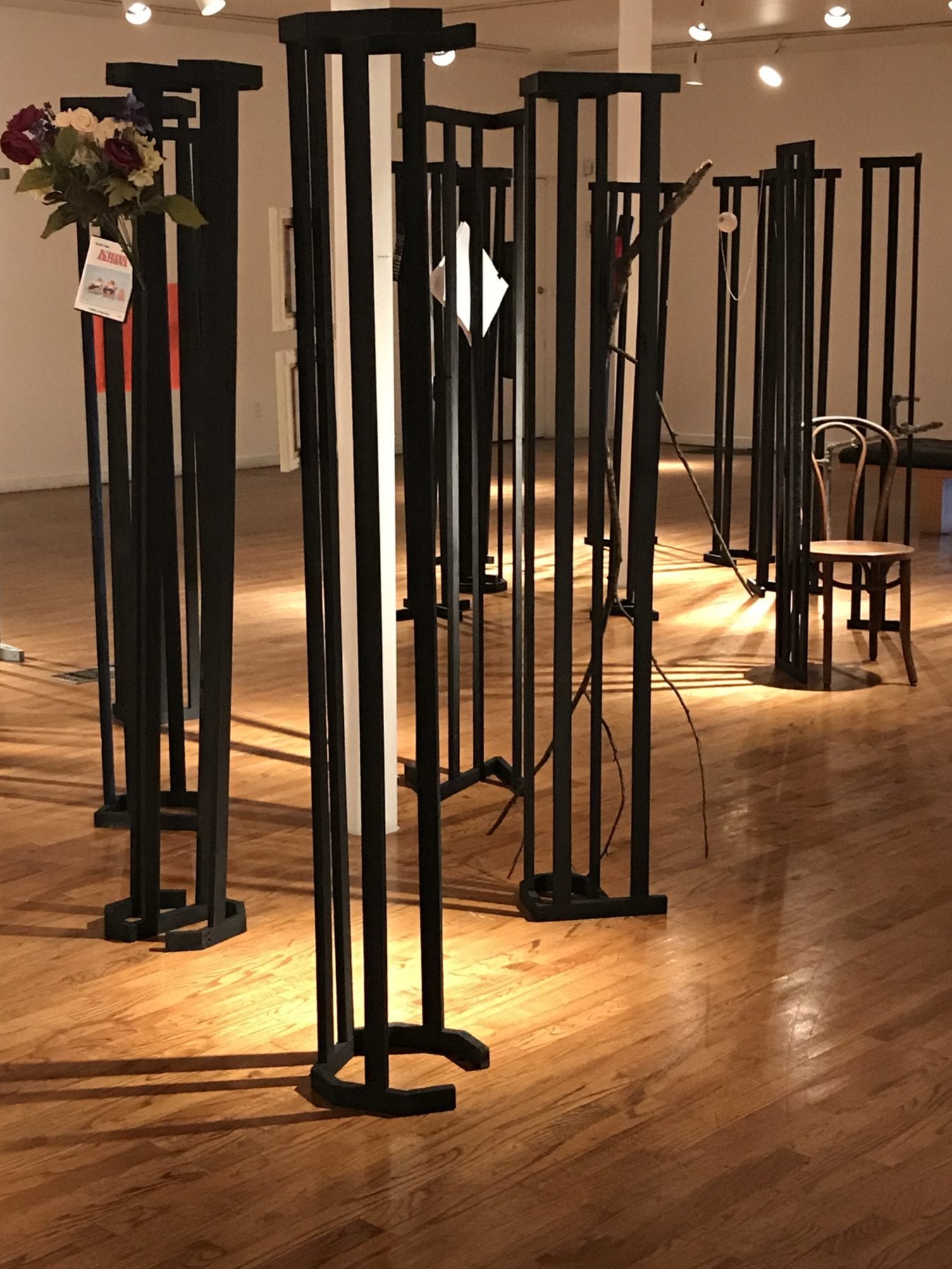 A detail of Trevor Reese’s wood letters with attached objects. Top: Sonya Yong James’ Blue is the hottest part of the flame and Blue night window, made of wood, canvas, rope and yarn. (Photos by Elyse Defoor)

Interpreting these pieces requires more forms of recognition. “H” is attached to a VHS cassette and its box, which identifies it as an HQS videotape. “L” holds an L-joint piece of plumbing, no labels involved. A ball of twine connects “U” and “W,” presumably directing us to the link formed by speaking the letters “u” and “double u.”

This game can be as frustrating as deciphering the relationships among the odd statements on the handout. What is the relationship between a conch shell and “Y”? If “P” is associated with a broken tree branch, is it because the branch is from a pine, a pear tree or a peach tree, or is the link something else? The silk flowers for “S,” like the L-joint for “L,” require prior knowledge in order to puzzle out the right names for the object, but does the same go for a combination padlock somehow related to “Q”?

In his artist’s statement, Reese says he’s interested in how we navigate among things in the world. He has, he notes, a very different relationship to his son and to his automobile. His unexpected juxtaposition likely will send the viewer/reader off into a meditation on the ways in which people relate to family members versus cherished possessions, and just how differently each individual approaches those relationships.

Reese’s analytical approach to duality, and James’ hands-on one, might seem a strange combination, but the more time you spend with this exhibition, the more natural it seems. The range of possible impacts makes this a show with an unusually wide range of rewards for attentive visitors.