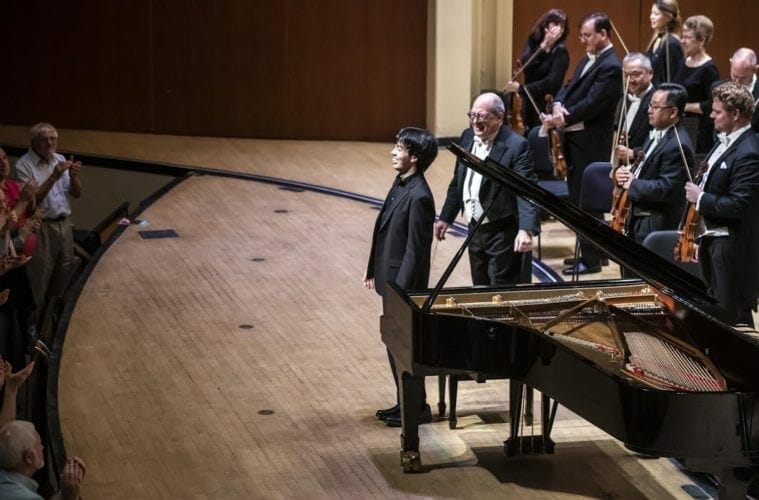 Last night’s Atlanta Symphony Orchestra concert included works that looked back into their own pasts. The Preludes to Acts I and III from Wagner’s opera Lohengrin (1850) contemplate the lives of the German medieval aristocracy; Bartók’s Second Piano Concerto (1931) looks back upon the rhetoric of baroque music; and Brahms’ First Symphony (gestated in 1855–76) is a meditation on Beethoven’s symphonies, in particular the Fifth and Ninth, and is his attempt to live up to the dignity of that tradition.

The concert repeats tonight at Kennesaw State University and returns to Symphony Hall on Saturday.

Lohengrin explores contrasts between heavenly and secular worlds and between Christian and Pagan worldviews. (It is the source for the hackneyed “Here Comes the Bride,” used traditionally for Western weddings.) The Act I Prelude was described by Wagner as a depiction of an angelic host emerging out of a pure blue sky, bearing the Grail. The Act III Prelude, by contrast, is a heroic, celebratory piece lasting no longer than three minutes that leads up to the bridal march.

In contrast to his rather anemic leadership during the ASO’s season opener two weeks ago, Music Director Robert Spano proved a loose, engaged and expressive conductor last night. The ethereal prelude to Act I elicited from him a subtle gestural palette with effective, extremely soft dynamics, giving the ensemble space to project interesting nuances. Likewise, the boisterous prelude to Act III had vivid contrasts between its lyrical ideas and the fanfare-like brass melodies, which were declaimed, sometimes rapid fire, and with impressive force.

Bartók’s Second Piano Concerto is a notoriously difficult, contrapuntal work — for piano soloist and orchestra — intended for the composer’s concert tours. Virtuoso pianists such as András Schiff and Stephen Kovacevich have said they came close to injuring themselves as they performed this challenging work.

The soloist last night was Tengku Irfan, a Malaysian-born, 20-year-old pianist, composer and conductor who is currently an undergraduate in piano and composition at Juilliard. This triple threat is becoming well known for virtuosic but cool-headed and clear performances of a variety of concertos, not simply late romantic but also more dissonant early-20th-century ones such as the one performed tonight. Tengku Irfan made an impressive debut with the ASO under Spano’s crisp direction.

In the first movement of the Bartók, which transforms the motoric rhythms of baroque music into highly percussive and dissonant gestures, Irfan established a consistently rounded, large tone, as well as a spotless technique. I was consistently impressed by the tight timing between soloist and orchestra, perhaps due partly to Irfan’s conducting experience. (By contrast, one iconic live recording of this concerto, Geza Anda’s from 1970, is relatively sloppy.) Irfan had a masterful sense of lyrical shape and line, but occasionally in the first movement, I could not easily hear his expressive nuances, whether due to Symphony Hall’s notoriously poor acoustics, my position in the hall, an issue of balance with the orchestra or Bartók’s choices in orchestration (the work could have and should have been revised later by the composer or by a contemporary scholar).

The third movement, again fast, is inspired by Hungarian folk song but is often guttural and dissonant. Here, the main theme of the first movement is rhythmically transformed but also becomes more heroic, with octaves in the piano. By the triumphant close of the work, it was clear that Irfan and Spano work well together. I look forward to hearing Irfan return to Atlanta: he has room to grow as an artist, and his variety of creative pursuits should allow him to innovate and help define the 21st-century classical concert.

Rounding out the evening was Brahms’ monumental First Symphony. This blockbuster work features a Bach-like, polyphonic slow introduction; a scherzo-like first movement; a highly lyrical but profound slow movement that recalls late Beethoven; a subtle, gentle and naturalistic allegretto; and a titanic, dramatic and heroic finale. Spano continued his strong leadership from the concert’s first half. The slow introduction was buttery, its tempo appropriately plastic for the style. The first movement was incisive and well-articulated. The second movement featured occasional ominous low notes as a warning of the past turbulence in the first movement; the ASO winds were top-notch as usual, as was David Coucheron’s ethereal violin solo at the end.

Spano kept the third movement moving and animated, and never sentimental. The finale contains perhaps Brahms’ best writing in the symphony, with a chaotic and unpredictable introduction that recalls Beethoven’s similar lead-ups to his finales. Spano made sure that the entire ASO played the finale with vigor and passion, taking particular delight in the pizzicatos that are counterpointed against the heartfelt main theme.

It was an evening of great teamwork and inspired direction from Spano, and the audience responded with thunderous applause.