Somehow, while the world was lamenting the absence of women in film and people like Harvey Weinstein and Les Moonves were turning the industry into a personal playpen, a playful, brilliant woman with a bowl haircut and an elfin demeanor was defying the odds to become enshrined as a certified, incontestable auteur.

She was Agnès Varda, a Belgian-born French film director, photographer and artist, whose work was central to the development of the French New Wave film movement of the 1950s and ’60s. 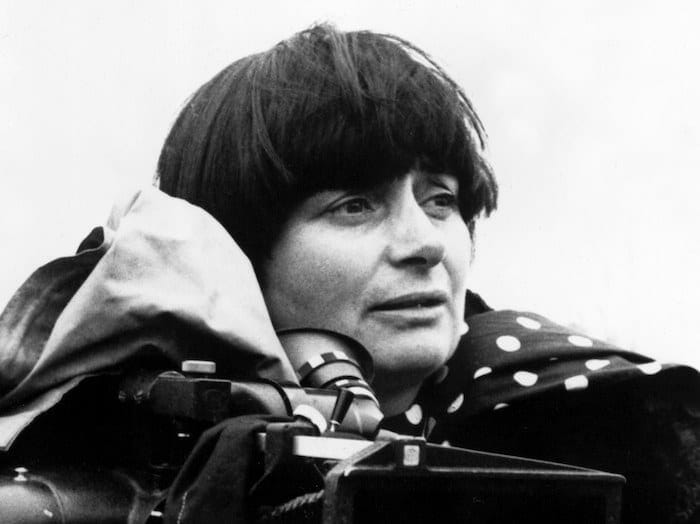 Agnès Varda on the set of “One Sings, the Other Doesn’t” in 1977. The film screens Tuesday night at Landmark Midtown Art Cinema.

The Toronto International Film Festival and the 2019 Cannes Film Festival — where she was the first female director commemorated on a festival poster — have highlighted tributes to and screenings of Varda’s work. Critics and fellow directors around the world acknowledged this impressive, influential woman, who died March 29 at age 90 but left behind a rich canon of film work and gave us a vision of what cinema in female hands could be. And of course, what it was.

Atlanta cineastes can revisit the peculiar mix of quirkiness, authenticity, political passion and female independence that defined Varda’s life and films on Tuesday, October 8, when Landmark Midtown Art Cinema screens One Sings, the Other Doesn’t (1977). It’s as apt a memorial to Varda as any, a chance to bask in the French New Wave not as a treatise on Marxist ideals rendered in film technique but the more radical notion of a world more earnest, fair, joyous and righteous because women are calling the shots.

Varda worked in film for more than 60 years, almost until her last breath (her documentary Varda by Agnès was released a month before her death from breast cancer), defying any notion that with age comes fatigue or the sapping of one’s creative juices.

Her output of more than 50 films included her critically lauded black-and-white character study Cleo From 5 to 7 (1962), centered on a flawed but compelling female heroine who goes about her day waiting to hear from her doctor about a possible cancer diagnosis. The film asks audiences to look beyond the exquisite, beautiful façade of doll-like lead Corinne Marchand to see the existential crisis unspooling in her head.

Another cinematic enchantment, full of seductive imagery and a bitter heart, the deceptively bright, sunny color drama Le Bonheur (1965) — which won the Berlin Film Festival’s Grand Prize — tells a story of familial and maternal love and devotion while examining society’s fragile underpinnings and how interchangeable women can be next to male will and interests. Critic Amy Taubin rightly sees Le Bonheur as a creepy precursor to The Stepford Wives’ similar tale of husbands who see their wives as interchangeable agents of their own happiness. It’s the prettiest film about the ugliest human behavior.

Remarkably freewheeling in her choice of subject and film style, Varda could go from the handheld camera and experimental gestures of the New Wave in Cleo From 5 to 7 to a slice-of-life biopic in her charming and romantic Jacquot de Nantes (1991). A memoir about filmmaker husband Jacques Demy’s idyllic working-class childhood in Nantes, France, and the roots of his creative passions, the film echoes Varda’s love of film and filmmaking. 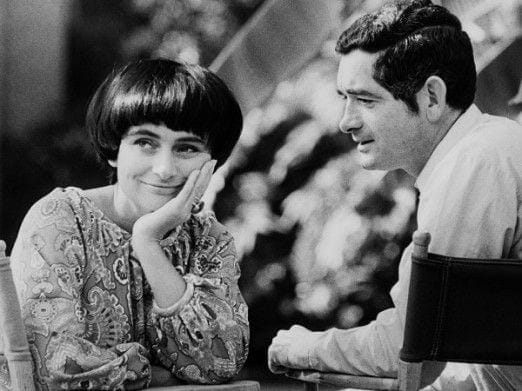 While Jacquot de Nantes’ story of a boy rebelling against a predetermined role in society was a tale of creative blossoming, Varda’s interest in people living on their own terms struck a darker note in her searing, fact-based Vagabond (1985), about a doomed female drifter played by Sandrine Bonnaire, who lived her life by a mysterious, self-willed logic outside of expected actions or social standards. The film won a Golden Lion at the Venice Film Festival.

An echo in some ways of Vagabond for showing the hardship of rural life and the tribulation of living on society’s margins, Varda’s politically engaged documentary about waste, consumerism and economic injustice, The Gleaners and I (2000), was a fugue on the ancient tradition of gleaning the remainders of the harvest, a tradition alive and well in contemporary France.

A paean to waste-not-want-not, The Gleaners and I was yet another feminism-inflected vision of what a world of caring and concern and small acts of rebellion would look like. Varda was 72 and using a digital handheld camera for the first time when she made the socially conscious documentary, an age when other women are typically imploring their offspring for grandchildren and stalking the aisles of Costco. Like so many of her films, The Gleaners and I is a compassionate survey of people from all walks of life seen by Varda as representatives of the poetry and agony of the human condition.

More recently, Varda’s collaboration with 35-year-old French street artist JR, the Oscar-nominated Faces Places (2017) was yet another lifting up of ordinary folk and continued Varda’s relentless, poignant blend of autobiography and artful experiment, always “revealing dimensions of herself in the process,” says Variety critic Peter DeBruge. 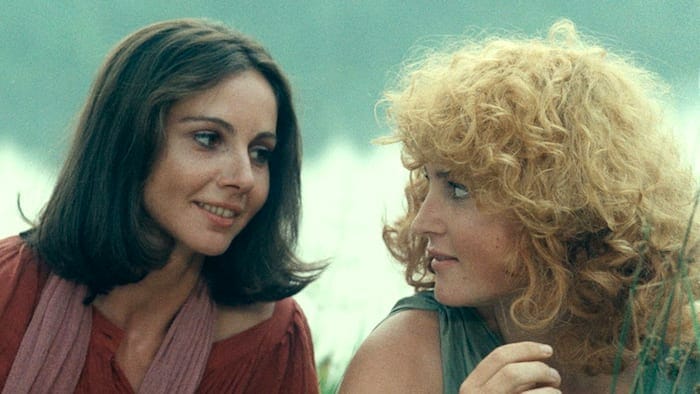 Thérèse Liotard (left) as Suzanne and Valérie Mairesse as Pauline in “One Sings, the Other Doesn’t”

One Sings, the Other Doesn’t is quintessential Varda, occasionally clunky but heartfelt and steeped in the urgency and authenticity of ’70s-era feminism. This tale of two accidental female friends who bond early in life and carry their friendship through decades of flux is as winsome, poignant and diaristic as they come.

“I wanted to portray the happiness of being a woman,” Varda said of the film, which includes sexual desire, children, romance, pregnancy, work, friendship, art independence, creativity, political activism and feminism within that holistic vision of happiness.

Pauline (Valérie Mairesse) is a 17-year-old budding revolutionary who thinks nothing of posing for an artsy photographer in the nude or of telling her parents she objects to the patriarchal power imbalance in their family. With her startling blue eyes and cornflower hair, Pauline is a character that women the world over will recognize in their lives: the rebel, the troublemaker, the status-quo bucker, even if they never saw such creatures on the silver screen. She was also Varda, a representation of what female will and agency and sheer nuttiness look like when allowed to flourish.

Pauline happens to reconnect with a sad-eyed former neighbor, Suzanne (Thérèse Liotard), who now lives with her struggling photographer lover and their two illegitimate children in a cramped flat above his photo studio.

In a stroke of fate, Pauline and Suzanne are reacquainted at the moment Suzanne most needs a friend. She’s pregnant again, doomed to an unbreakable pattern of poverty and dependence, and Pauline extorts $100 from her parents for an abortion. She even offers to babysit Suzanne’s children while Suzanne travels to Switzerland for the abortion. Contemporary viewers may feel their hackles raise watching these women vehemently fight for their right to choose even as American women struggle to maintain that right in 2019. 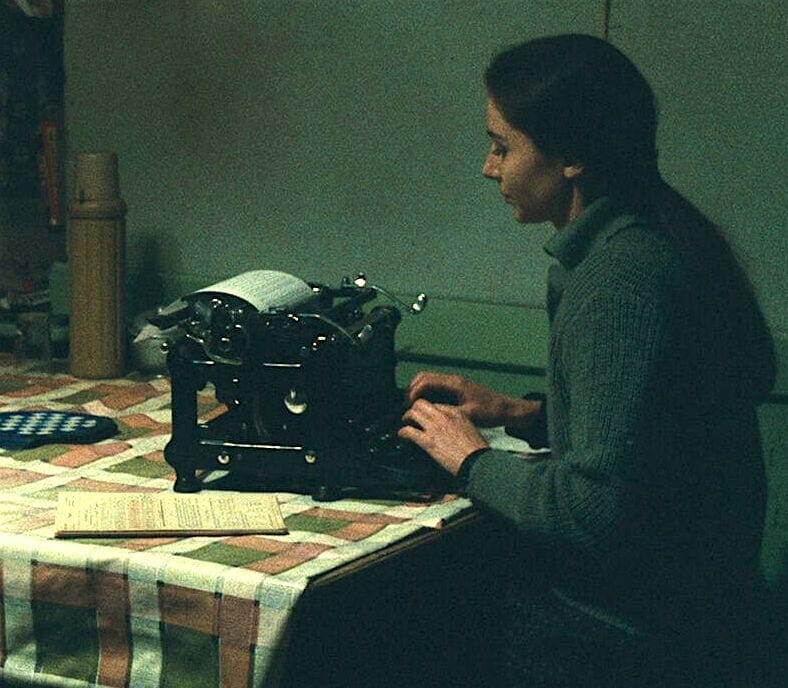 Thérèse Liotard as Suzanne in the 1977 Agnès Varda film “One Sings, the Other Doesn’t”

Things spiral from bad to worse, and the friends part. Pauline pursues her hippie singing career with a troupe of traveling lady troubadours who belt out angelic hymns to the female body and self-determination. A more indentured Suzanne is exiled to her terrible parents’ remote farm. While her mother calls her grandchildren bastards, Suzanne plots her escape, bathing her children in love and practicing her typing skills in a freezing stable so as not to annoy her joy-crushing kin. Over the course of 14 years, the friends reunite and then part — but never lose their intense connection.

Who hasn’t known a Suzanne — a fierce force who pulls herself and her family out of one tax bracket and into another? Or a Pauline who vehemently shuns the normal way and must be free at all costs?

Such is the circumstance of female existence in Varda-land, where a kind of self-determination, pluck and sisterhood-is-powerful message buoys its heroines through life’s darkest days. 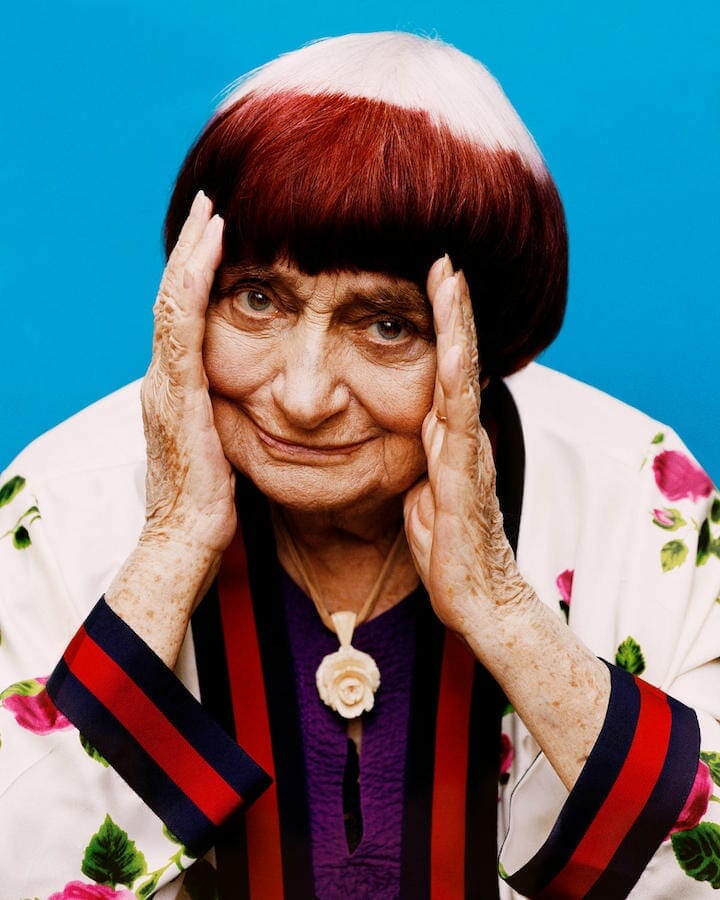 “When I started I did not know I wanted to be a filmmaker,” Agnès Varda once said. “I started. I made a film. Then when I finished I said, ‘Oh my god it’s so beautiful — I should be a filmmaker!'”

American cinema’s take on female free will and the carefree offered us melancholic Holly Golightly and gassy Goldie Hawn, but Varda gave us relatable screen icons so flawed and interesting that they tend to make other symbols of female pluck look like cardboard effigies.

Even today’s most kick-ass heroines — whether the egghead miscreants of Olivia Wilde’s Booksmart (2019) or the ambitious schemers of Curtis Graham’s The Favorite (2019) — pale next to the occasionally silly but relentlessly human beings of One Sings, the Other Doesn’t.

Varda’s film is like looking at a yellowed family photograph of some steely-eyed great-grandmother with a baby on one hip and a plow on the other, and wondering about the reserve of will and strength that once existed and that the world tamped out.

One Sings continues Varda’s lifelong interest in female iconoclasts, a role she inhabited in her own life. As the sole female member of the French New Wave, she knew the circumstance of making your own way with few role models. Varda never inhabited the familiar female tropes of siren or intellectual that define French life and cinema, neither a Bardot nor a de Beauvoir. Instead, she was joyful, silly, experimental and decidedly feminist in living fully on her own terms.

As Varda told The Guardian in her last interview, “I would like to be remembered as a filmmaker [who] enjoyed life, including pain. This is such a terrible world, but I keep the idea that every day should be interesting. What happens in my days — working, meeting people, listening — convinces me that it’s worth being alive.”