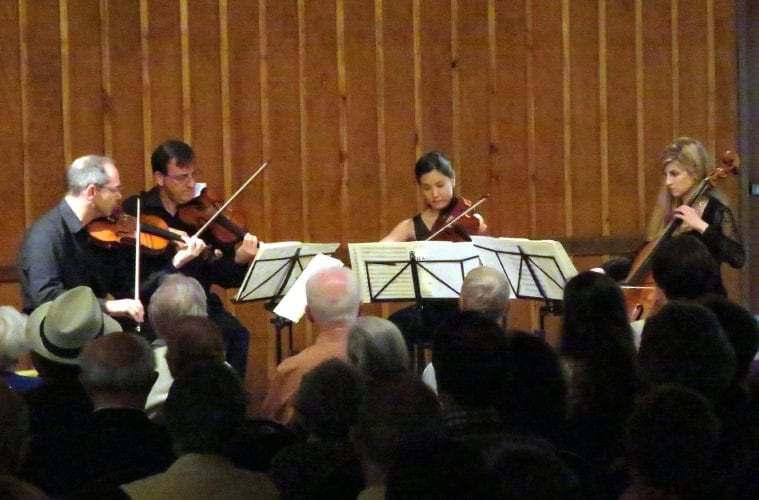 A humid afternoon greeted the capacity plus audience at Garden Hills Recreation Center this past Sunday where the Peachtree String Quartet performed a concert of music by Mozart, Barber and Schumann.

It was actually the second time the Quartet had presented the same program in a week, having performed it the previous Sunday in the deep suburbs at First United Methodist Church in Duluth less than 24 hours after the musicians of the Atlanta Symphony Orchestra were locked out by management in the current unsettled labor contract dispute. All members of the Quartet are also members of the ASO: violinists Christopher Pulgram and John Meisner, violist Yang-Yoon Kim and the Quartet’s newest member, cellist Karen Freer. Freer replaces cellist Jennifer Humphreys, who left the ASO to take a “greener pastures” position with the Dallas Symphony Orchestra.

The sanctuary at Duluth First UMC, with a posted capacity of almost 1,000, is exponentially larger than the Quartet’s familiar home venue in Garden Hills. The Duluth performance drew its own reasonable-sized audience for a chamber music concert and while the space lacked intimacy, the sound was satisfactarily good for the audience that was seated in the ground-level pews. And from the balcony level, there was a degree of bloom and warmth to the Quartet’s sound that was not as much heard from the main level.

But this review focuses upon the more recent Garden Hills performance. There were more than a handful of audience standing, as the volunteer house managers literally ran out of chairs.

The Quartet opened the concert with Mozart’s String Quartet in G Major, K. 387, sometimes called the “Spring” quartet, completed on New Year’s Eve of 1782, according to the autograph. It was the first of a group of six that Mozart dedicated to Franz Joseph Haydn.

The surprisingly chromatic work opened with an “Allegro vivace assai” movement that was engaged in a passionate, almost urgent manner, pushing the front edge of viable momentum. A courtly, if long, “Menuetto” followed. But it was in the “Andante cantabile” third movement that the pace settled into a natural, comfortable zone with serenely thoughtful, lyrical playing. The last movement, a contrapuntally complex “Molto allegro,” foreshadowing that of the composer’s “Jupiter” Symphony (No. 41), proved an engagingly lively finale albeit with quietly blissful closing bars.

The Quartet then reprised a work they played in their debut concert in April 2012, the iconic String Quartet of Samuel Barber, which includes as its middle movement the music that became his “Adagio for Strings,” which was prominently featured in the 1986 Oliver Stone film, “Platoon.”

Barber completed the first version of his String Quartet on 1936 at the age of 26, but he was unhappy with the finale. It took almost seven years, through several rewrites, for the last movement to reach its final form, the version first played by the Budapest String Quartet in 1947.

It is a work not without significant challenges to the performers, but Sunday’s rendering, as in the group’s debut two and a half years ago, captured the intense emotional drama of the outer movements and ethereal poignancy of the central Adagio.

The second half of the program as Robert Schumann’s String Quartet in A minor, Op. 41 No. 1, the first of three dedicated to Mendelssohn that were composed in 1842, a year in which the composer was manically obsessed with chamber music. Here, in this warm-hued Romantic-era work, the musicians found their most cohesive ensemble of the evening.

Overall the program itself was superbly planned. The three works fit together into an unusually strong and artistically satisfying sequence. It will be interesting to see if the programs for the rest of the Quartet’s season pan out the same way. Those concerts won’t take place until early 2015, and and are not yet posted on their website, but artistic director Pulgram says there will be at least three more concerts before the end of spring: two at Garden Hills and one at another location, but there is a possibility of even more on tap. Like with other current unknowns in Atlanta’s classical music scene, we’ll just have to wait and see.