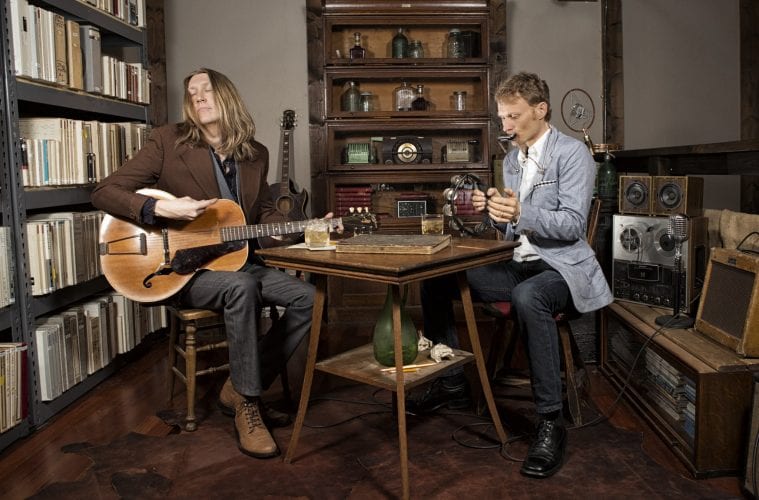 Preview: After 25 years of paying dues, the Wood Brothers find their muse (and success) 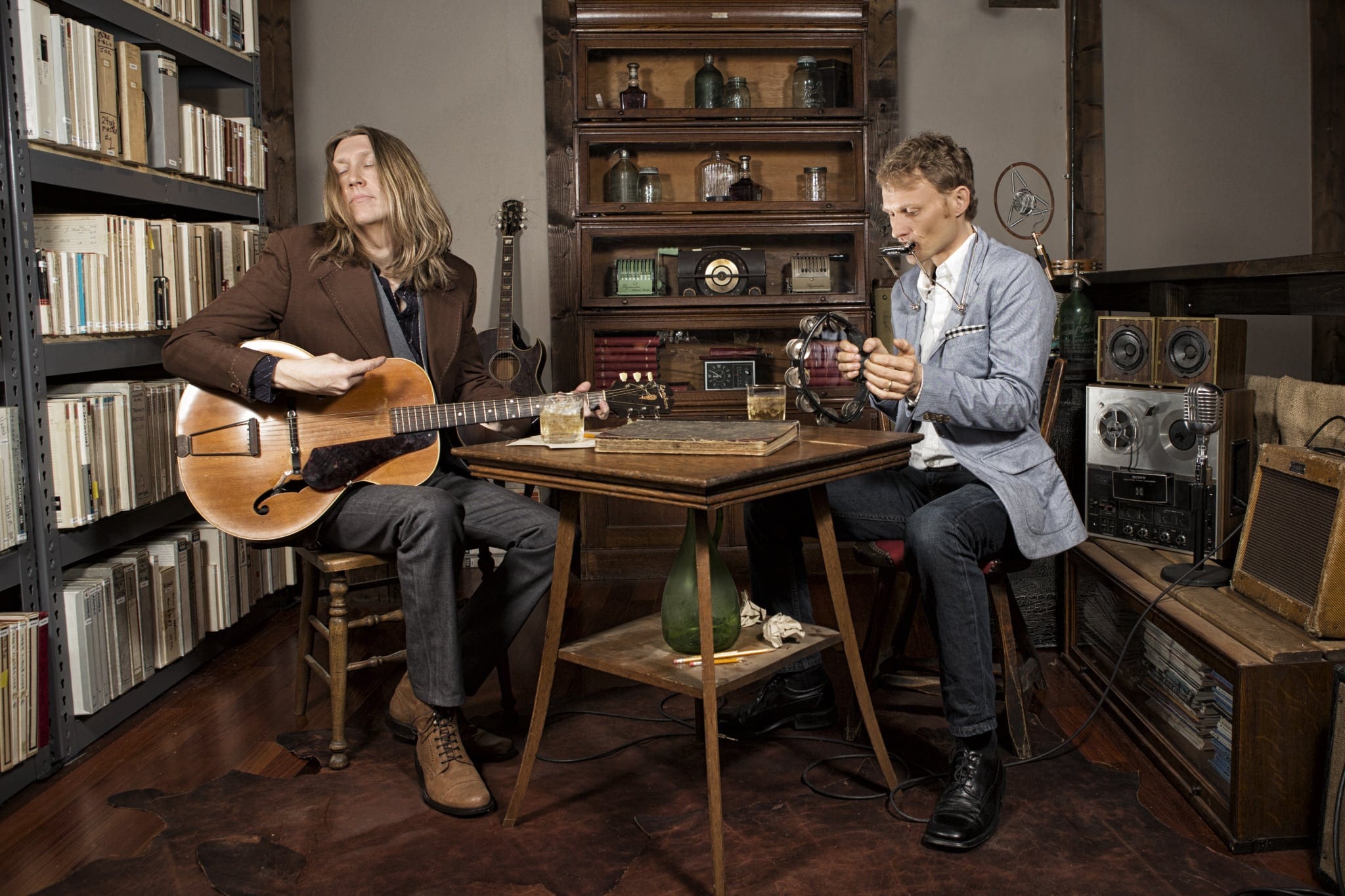 Oliver Wood (left, with his brother Chris) was a fixture on the Atlanta scene through his work with Tinsley Ellis and King Johnson. (Photos by Elizabeth Penta)

When Oliver Wood first arrived in Atlanta in the late 1980s, he had no set plan to make the city his home base for almost 25 years. At the time, the young college dropout was traveling with some musician friends from California and decided to stay and pursue his own independent study of the local music scene. This consisted of playing in countless clubs and venues around town, often schooling himself through gigs with various local legends such as Tinsley Ellis and Donnie McCormick. Wood recalls, “Those people are my teachers and my mentors, whether they knew it or not.”

At one point, Wood seemed poised for national success with his own band, King Johnson. That didn’t pan out, but it did lead to a career turning point that began with a concert in North Carolina where King Johnson opened for Medeski Martin and Wood, the acclaimed jazz/funk/avant noise trio, which featured Oliver’s younger brother Chris on bass. Although the two brothers had pursued separate careers for almost 15 years, they experienced a transformative musical chemistry when they jammed together, and it inspired them to team up as the Wood Brothers, releasing their record debut in 2005 (Chris Wood also continues to perform and tour with Medeski Martin and Wood).

The duo has enjoyed a steady rise in popularity and acclaim since their inception and, with the addition of drummer/multi-instrumentalist Jano Rix, the Wood Brothers have further expanded their fan base through a European tour and the 2013 release of The Muse, which many consider their most accomplished album to date. Their music, which defies easy categorization, incorporates influences from almost every musical genre in both electric and acoustic presentations — the gospel influenced “Made It Up the Mountain,” the down and dirty funk of “Who the Devil,” the jaunty folk stylings of “Postcards from Hell” with its bittersweet lyrics, or a joyous, slowed-down, country blues cover of Los Lobos’ “I Got Loaded.”

In a phone interview ahead of the Wood Brothers performance Friday at the Variety Playhouse, Oliver Wood discussed his career, his recent relocation to Nashville and the process of songwriting.

ArtsATL: Was relocating to Nashville a hard adjustment after spending so many years in Atlanta?

Oliver Wood: I moved to Nashville two years ago and I lived in Atlanta for almost 25 years. Nashville always had a stigma to me when I lived in Atlanta. I always thought of it as a little too much music industry going on, but I don’t find that as being the case at all. We really like it because of the music industry. It feels good to be among people like myself who make a living in the business. It’s just normal. People don’t ask you questions like “What’s your real job?” There’s every kind of music here and it’s the highest quality. We miss Atlanta a lot for the people and the music scene I was involved in, but we love that Nashville feels like a small town with a big music community. 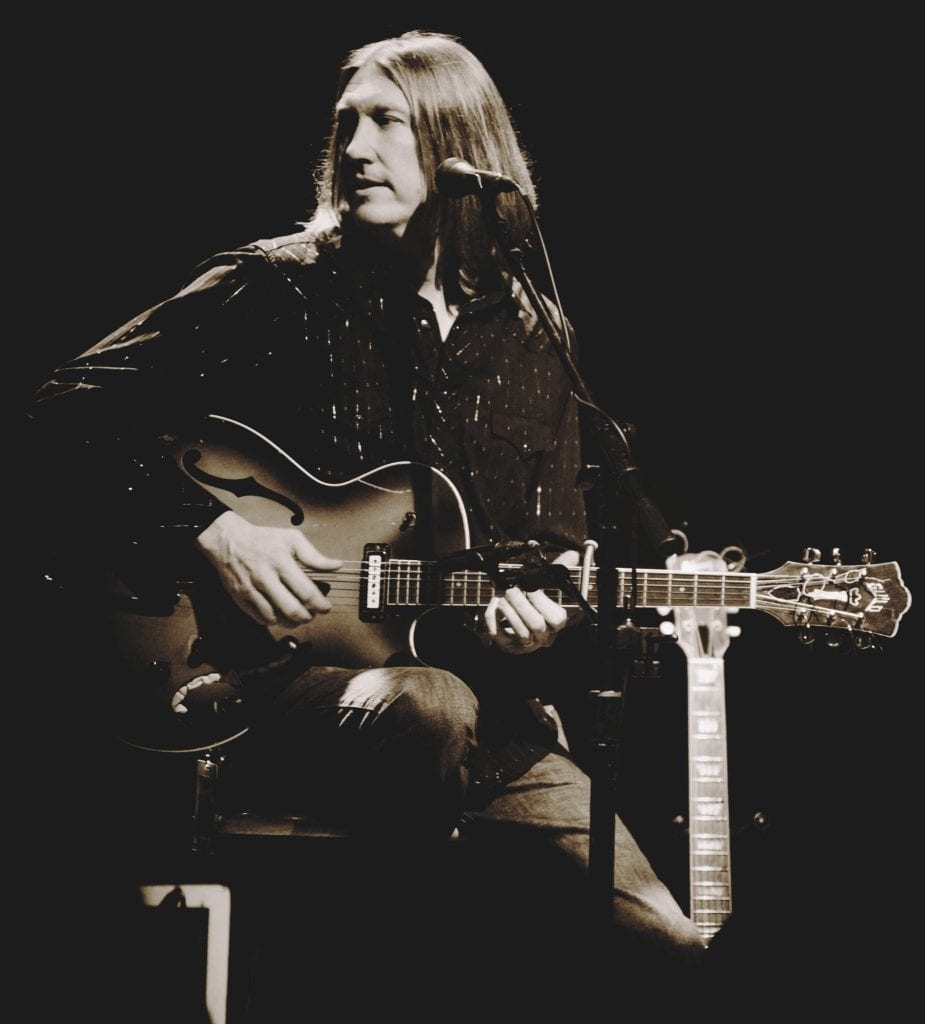 Wood’s home base was the Northside Tavern.

ArtsATL: Did you ever think about abandoning a music career and pursuing another line of work at any point?

Wood: Absolutely. Back in my Atlanta days I had a band that I was very proud of and very passionate about called King Johnson. We probably played together somewhere between 10 to 15 years if you count the very beginning to the very end. That was the first creative project of my own where I was involved with the writing and that’s where I learned how to sing. The other guys in the band were musical comrades. We had a passion for it and we busted our butts and felt like we didn’t get anywhere for a long time. There was a point sometime in the nineties where I just got completely discouraged and said, “Screw it. I’m going to start my own business, be an entrepreneur of some kind.” I actually started waxing peoples’ cars — it was a car-detailing business — and I cut back on music, which felt like the right thing to do at the time. About six months later, I said, “What am I doing? What am I thinking? This is hard work!” [laughs] So I certainly went through a point of disillusionment and had to go back and face the regular world and realize that I am a musician. I’m glad I stuck with it to the point where I can finally make a living at it. It’s not easy, but I attribute a lot of my success to hard work. A lot of it is luck. It really is who you know, what kind of breaks you get and not giving up.

ArtsATL: What were some of your favorite Atlanta music venues and experiences?

Wood: I played with Lee Griffin at Fat Matt’s every Tuesday night, and that was an education in itself. I looked forward to it every week and didn’t make more than a few tips, but I have super-fond memories of that. Of course there were cool places like the Point, the Star Bar, the Dark Horse Tavern. I went to see a lot of great music at Fuzzy’s Place. I loved playing at Eddie’s Attic. I thought that was a fantastic venue. And I have fond memories of the Variety Playhouse and I always dreamed of headlining there.

You know the place that made the biggest impression on me? The Northside Tavern in its heyday was, for me, kind of a mecca because that’s where some of my heroes were, like Donnie McCormick from a generation ahead of me and Sean Costello from a generation behind me. And Bill Sheffield and Mudcat . . . there’s so many good ones. When we’d go on the road with King Johnson, we would always look forward to coming back and playing a whole weekend at Northside Tavern. That was like our homecoming gig.

ArtsATL: When you aren’t touring, how often do you get together to practice?

Wood: We certainly don’t do it every day. We’ve got families and kids and mortgages and our lives. When we’re off tour, we’re always trying to catch up on all that stuff and be good parents and husbands. But I will say we try to take advantage of living in the same city because that had not been the case until the past year when Chris and his family joined us in Nashville. To actually have a rehearsal before a tour is a luxury for us because we used to all be in different parts of the country and fly and meet somewhere and start from scratch. Even our drummer Jano [Rix] lives here in Nashville. 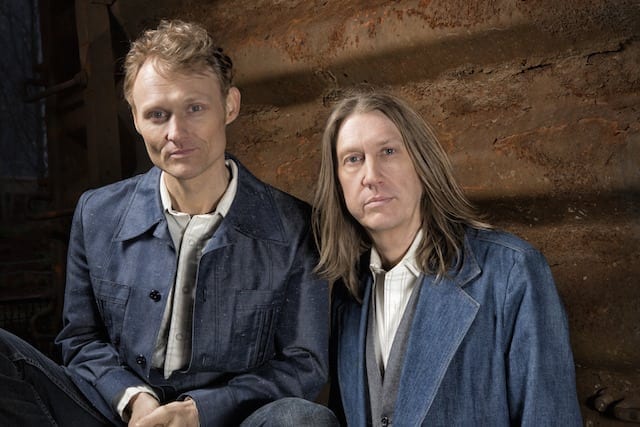 ArtsATL: Can you tell me about your songwriting process?

Wood: Collaborating on anything creative like that, you have to have trust and really let go of trying to control things and really share the ideas. We’ve gotten really good at saying, “Hey, I got a half-finished thing. See what you can do with it,” or just sitting right next to each other, writing lyrics, looking at the paper and making suggestions and being open to changes. It’s taken a long time for us to get to that point where we’re really comfortable with that, but it’s really gratifying to write that way . . . and to share in the triumphs and the defeats.[laughs]

ArtsATL: How would you classify the sound of your music?

Wood: There are genre names like blues, gospel, bluegrass. The one that I have a problem with — and it’s also our bread-and-butter audience — is Americana. There are European bands that play Americana. It’s become this word like jazz. What is jazz? Is it Miles Davis? Is it Kenny G? Is it smooth? Is it accessible? Needless to say, I hate the genre indicator thing, but obviously the industry needs a way to market music and that’s been going on since the beginning. But I think when we play that circuit, maybe our music stands out a little bit because we have some quirk to what we’re doing. I have kind of an annoying, piercing voice — you can either love it or hate it — but there’s just quirks about what we do. We’re not reinventing the wheel, but I think we have a style. We go over pretty well because we’re just doing what we’re good at. As long as you’re being yourself, you can get across whatever your musical passion happens to be. That’s the beauty of it.

ArtsATL: What were important musical influences when you were young?

Wood: We were very influenced by our father who is a musician, too. He never did it for a living but he certainly could have. He ended up being a biology professor but he was a serious musician in college. He was part of the Northeastern folk scene in the late fifties, early sixties. All we knew about live music when we were little was what he did, sitting around the living room. He’s got a huge repertoire of songs. I was drawn to the bluesy stuff, and he had a record collection which included Jimmy Reed and Lightnin’ Hopkins. But he also had records by the Who, the Beatles, Dylan, Joni Mitchell. I think it was the blues stuff that led me to get an electric guitar. But our father was the big influence. I feel like my brother and I — before we actually got together and started this group — have been on a musical journey that has come full circle, back to appreciating what our dad did. 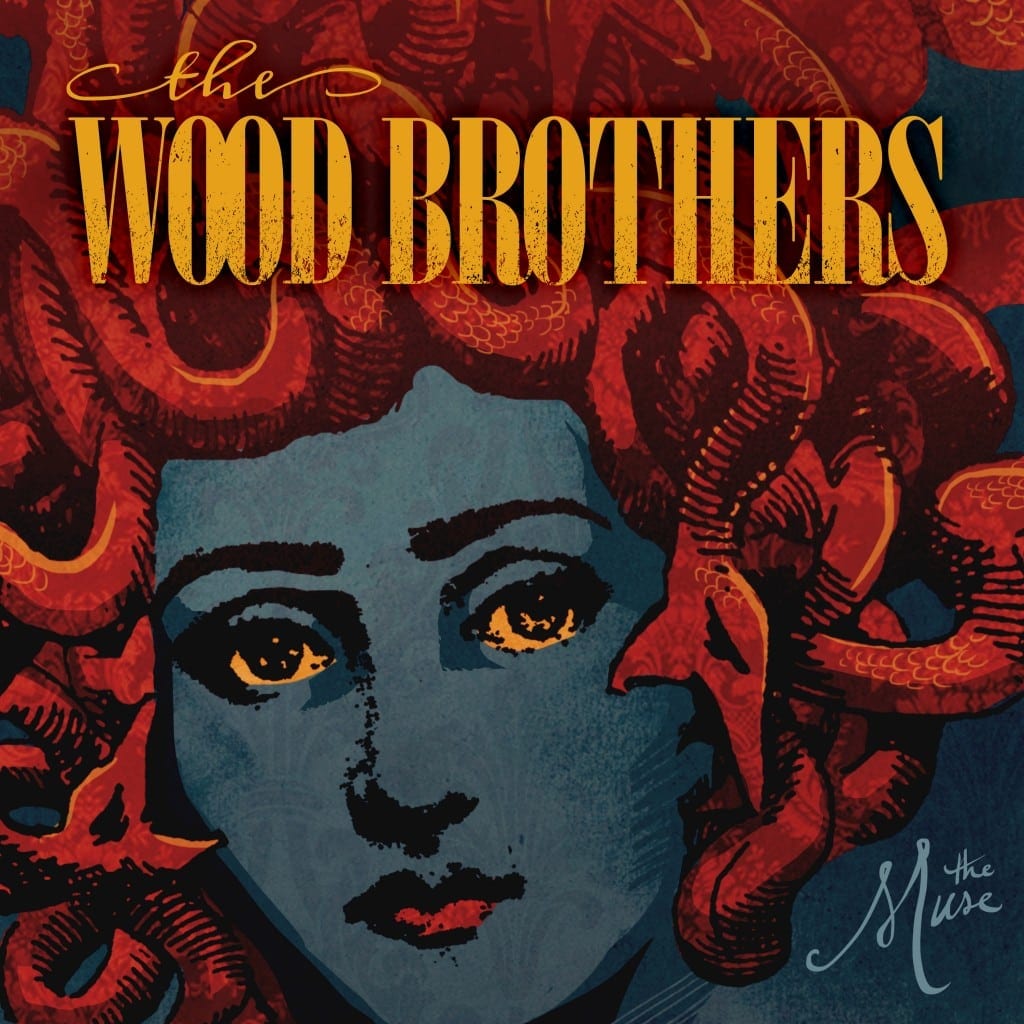 ArtsATL: So your first musical instrument was the guitar?

Wood: Interestingly, I started on bass because I thought it might be a little easier, which is stupid. [laughs] After six months I said I wanna play guitar, so I gave my brother the bass and he, of course, just went nuts on it.

ArtsATL: I love Buddy Miller’s production on your album The Muse, which I think captures the quality of your live shows. Do you ever think about taking a completely different approach with another producer just to see what they could bring to your sound?

Wood: You know, that’s been a real hot topic amongst our camp recently because we’re about to make a new record. I think it’s really cool to be able to make a record that represents what you do live, and we’re really proud of how that record came out. But I also think it’s nice to change things up. As an artist, you don’t want to do the same thing over and over. We loved working with Buddy Miller. He’s just awesome. We’d do it again in a second. On the other hand, we may really want to make something that is a real contrast to what we’ve done already. We like to push it a little bit, get out of our box and see what really happens.