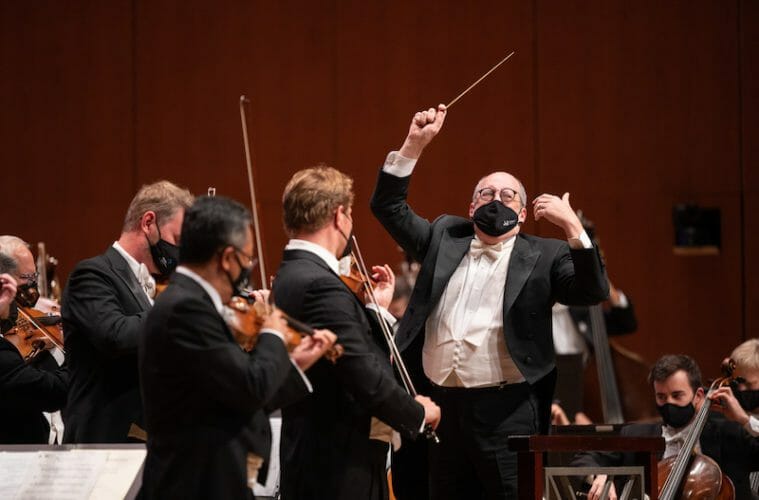 Mask and vaccination protocols were in place for the Atlanta Symphony Orchestra's first opening night in front of a live audience in two years. (Photos by Rand Lines)

Thursday saw concertgoers flock to Symphony Hall like parishioners to a long-dormant cathedral. Vaccination card checks and mandatory masks notwithstanding, there was a palpable energy in the air that elevated the usual lighthearted chitchat of the lobby to a jubilant cacophony. It was longing for a return to moments like these that had given us strength in the year of Covid-19 and like acolytes to a long-neglected altar, we convened for the first proper opening night in two years for the Atlanta Symphony Orchestra.

Robert Spano, who is now co-artistic advisor while the ASO seeks a permanent new music director, was in fine form, maintaining the long-standing tradition of commencing the opening night of each new season with the “The Star-Spangled Banner.” It was a gesture that spoke to the enthusiasm of the crowd and set the tone for the stirring majesty of the evening’s proceedings. As if rising to match the crowd’s passion and vigor, the ASO had decided to open its season with one of symphonic music’s most towering mainstays: Beethoven’s Fifth Symphony.

Far from pandering to appeal to the mainstream of classical musical enthusiasts, the Fifth seemed uniquely poised to highlight the turbulent events of the past year-and-a-half with its sonorous, legendary opening that gives way to lighthearted meditations, much as the turmoil of the lockdowns transitioned into the cautious optimism of the vaccine rollout. The piece’s ominous, pulsating signature phrase succeeded on the strength of the string section. With superb ensemble tonality being a staple of the ASO’s sound, the evening was off to a thrilling and majestic start. 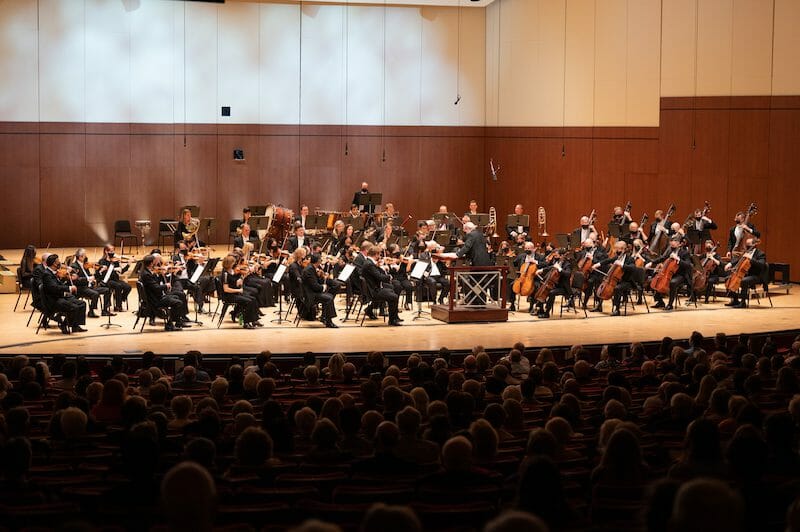 Still, there was a single jarring instant that threatened to derail the proceedings: as much as the Fifth is known for its admonishingly dark introduction, it is equally revered for its dips into the delicate and softly euphoric, a transition signaled by a french horn passage that was surprisingly overplayed. While it may seem overly critical to call attention to one passage — a mere six notes — it is a phrase that must be played with a silky, pure tone rather than the brash, distorted and somewhat rushed manner in which it was here delivered. The result was a jarring moment that failed to smoothly carry the melody from one section to the next.

Beyond that passing error, the opening Allegro was delivered in all its apocalyptic grandeur but more interesting was the Andante con moto. While I’ve often been critical of Spano’s reserved and conservative approach to conducting, it is in these smaller, more contemplative moments where his technique thrives. The result was a delicate and richly multi-textured interpretation that thrived on the crystal clear tones of an angelic flute section. The Fifth would receive an enthusiastic standing ovation, clearly satiating the appetites of the audience’s army of long-deprived concertgoers.

For the evening’s second half, Beethoven’s mysteriously titled “Emperor” concerto for piano and smaller ensemble offered a spectacle hinged on the delicate execution of dementedly intricate piano solos. More than ready to rise to the challenge was guest pianist Garrick Ohlsson, whose effortless virtuosity cascaded across the keys with nimble deftness. Perhaps most enjoyable in his playing was the hypnotically textural detail to his rushing arpeggios. The rest of the ensemble was merely a framing device for his captivating performance. Beethoven may have hated emperors and the unchecked power they wielded, but the “Emperor” concerto itself provided ample ground for Ohlsson to reign dominion over the piano.

Outstanding among the reasons Beethoven looms large among composers is his positioning as a key transitional figure in the evolution from the Classical to Romantic eras. To that end, he was known to harness emerging musical technologies of his era, the piano outstanding among them. While the instrument is understandably seen as commonplace now, the piano was less than a century old at the time of Beethoven’s birth and his was the first generation to come of age playing it. As such, the creative possibilities were still being explored and the “Emperor” concerto stands as a testament to Beethoven’s mastery of innovative, vanguard thinking. To hear Ohlsson breathe such rich and deep life into such a work was nothing short of sublime.

Overall, it was a night of grand joy for audience and performer alike. The few rough spots were merely the dawn-lit flexing of a great, majestic beast returning from its hibernation. It was a promising opening performance to the season that Atlanta’s classical enthusiasts have been longing for throughout the last 18 months of this strange, chaotic modern era we struggle to inhabit.