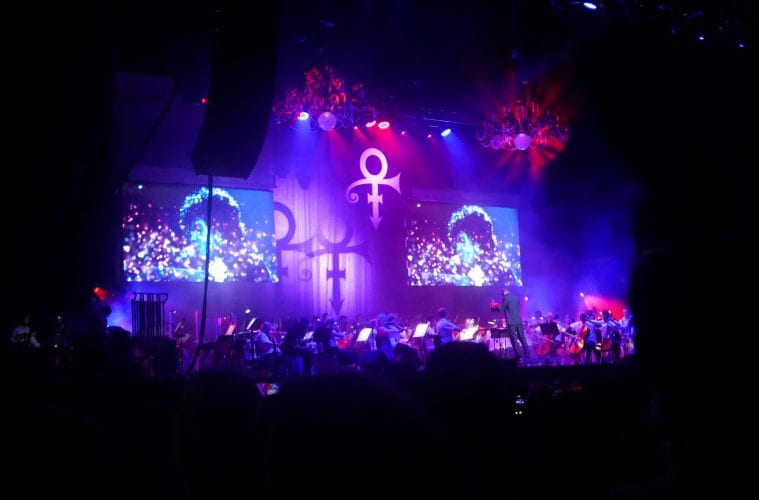 ASO lends symphonic weight to “4U,” a tribute to Prince that strikes home

Symphonic interpretations of rock and pop — especially those hybrids that combine electrified contemporary instruments with their classical counterparts — will always be a mixed bag. At its very best, the fusion offers a vital new take on contemporary music, finding in it a harmonic depth and majestic grandeur not normally explored in the more limited constraints of the popular music combo. Yes’ Magnification, Peter Gabriel’s New Blood and even Aqua’s Aquarius are prime examples of the concept at its finest. At its worst, the practice is a bloated, pompous and deeply pretentious melding of disparate forms that, as the saying goes, is like a houseboat: neither a good house or a good boat. (Kiss’ wholly unnecessary Alive IV is a grand example of that.)

Ultimately, all contemporary/classical crossovers hinge on the flexibility of the source material: Eddie Daniels can adapt Vivaldi’s Four Seasons into a jazz setting thanks to the original’s jovial whimsy, and Metallica’s classical undercurrents provided fertile ground for their famed pairing with the San Francisco Symphony. In that vein, the frequently avant-garde, genre-hopping pop leanings of Prince Rogers Nelson would seem like a promising, if precarious, foundation for classical hybridization.

Such potency was looming in the (purple-tinted) air at the Verizon Wireless Amphitheatre Saturday when the Atlanta Symphony Orchestra, accompanied by a motley touring band of guitar, bass, drums and synthesizers, took the stage to present 4U: A Symphonic Celebration of Prince. The product of a collaboration between Ahmir “Questlove” Thompson and long-time Prince arranger Brent Fischer, the show brought its own impressive pedigree as the only estate-approved symphonic tribute to Prince’s music.

The set opened promisingly with an instrumental introduction weaving together lines from Prince’s endlessly quotable catalog while still presenting a wider range of harmonic possibilities that channeled George Gershwin, Duke Ellington and Aaron Copland — the kind of contemporary American masters that Prince himself was never shy about acknowledging in his compositions. That degree of majestic, cyclical awareness was consistently on display in the show’s intoxicating arrangements, which allowed bursts of hit single to blend seamlessly with warm waves of deep cut, striking a fluid balance between dreamy imagination and crowdpleasing sing-a-longs.

Those familiar with Prince’s approach to the concert setting will be well aware that he was no fan of the standard start/stop/start/stop format of most live shows. Not one to simply belt out one three-minute hit after another with intermittent breaks for applause, he instead preferred weaving his set list together so that the individual songs became smaller movements within a larger suite.

Clearly hip to this approach and its natural compatibility within the classical format, Questlove and Fischer used more obscure selections as gentle segues in and out of anticipated classics, creating progressive epics that called to mind the finer moments of the Mahavishnu Orchestra. A big band swing take on “Controversy” drifted into a playful rendition of “Computer Blue” by way of “Something in the Water,” culminating in a scorching guitar solo on “Automatic.” By the end of the first sequence, it was clear that this was no mere symphonic jukebox but rather a deeply soulful conceptual realization of the larger potential in Prince’s music.

One pleasant surprise was Questlove’s willingness to lean heavily on material from Parade, the soundtrack album to Prince’s poorly received film Under the Cherry Moon. Sure, the album was a hit, but the movie is widely regarded as a giant misstep, and drenching the video screens with its visuals was a bold move indeed. Here, however, it worked: the film was a love letter to the golden age of black and white Hollywood, and as such, the soundtrack offers a bevy of lush orchestral seduction that, as always, pays tribute as much to Prince’s influences as to the man himself. In that way, 4U serves a higher purpose in helping to cement and celebrate Prince’s place in the ongoing tapestry, the weaving of which was begun by the masters that preceded him.

Despite the epic song structuring, there were, of course, moments when the glory of an impending piece mandated a solemn pause. Such was certainly the case with the first half’s showstopper, “Nothing Compares 2U,” wherein warm waves of tenor sax hovered bittersweet among an accompanying harmonic palette far more colorful than Sinéad O’Connor’s minimalist original.

The first half closer, “1999,” left the audience enthused and ready for a more top-40-oriented second half that featured tracks from Prince’s magnum opus Purple Rain along with shoo-in classics like “Raspberry Beret” and “Little Red Corvette.” The more straight-ahead approach of the second half afforded more moments for audience participation and featured solo moments for the electric players, but the arrangements remained creative throughout. A particularly satisfying moment came when the whole orchestra tackled the iconic guitar solo at the beginning of “When Doves Cry.”

Despite high marks throughout the night, it was the show’s closer, the borderline religious experience title track from Purple Rain, that was unfortunately lukewarm. Relying on an overdubbed Prince vocal track, what should have been a teary-eyed salute to a modern master felt oddly subdued with conservative arrangements that, while appropriately hard-hitting at all the right moments, felt stilted and mechanical as they bent the live and organic into sync with the fixed and prerecorded.

Such a shortfall, though unfortunate on its own, certainly did not diminish the overall artistic accomplishment on full display throughout the rest of the night. The audience was enthusiastic throughout, seeming upbeat and satisfied as they departed.

As the modern age wears on, it is inevitable that our pop stars will cross that Graffiti Bridge into the next life, leaving behind a body of work to be celebrated by the classical conservatories much as they now honor Mozart, Brahms and Beethoven. 4U: A Symphonic Celebration of Prince was a bold, bright and above all respectful step in that direction.