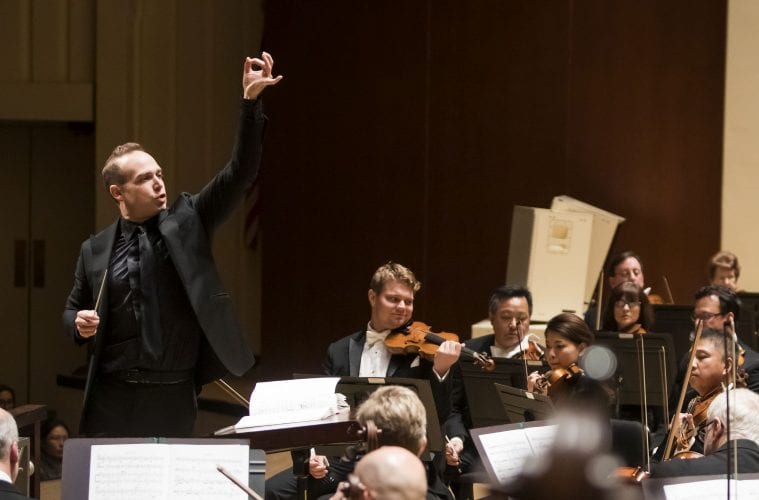 As part of the Atlanta Symphony Orchestra’s two-season celebration of Leonard Bernstein, the orchestra kicked off the new year on Thursday with an entire concert of music by the American composer. Guest conductor Christopher Allen led the program at Symphony Hall, which featured vocal soloists mezzo-soprano Sasha Cooke and baritone Joseph Lattanzi, and the ASO’s principal clarinetist Laura Ardan. The evening was anything but the norm for a subscription season outing, providing a pops concert feel in a non-pops context — in that the concert carried a flavorful balance of seriousness and entertainment.

The concert opened with Bernstein’s 1949 “Prelude, Fugue and Riffs,” which seesawed between Stravinsky-influenced American post-war optimism and raucous head-first jazz reminiscent of Stan Kenton’s band of the 1940s, fusing jazz and neoclassical music. The stage was set up for the piece in an unusual manner compared to the typical symphonic concert, but the layout made sense for the scoring: the same as 17-piece jazz “big band” plus extra percussion and an up-front clarinet.

The three brief movements were performed without pause, with the brass leading the first movement as “Prelude for the Brass,” and saxophones stealing the focus for the second in “Fugue for the Saxes.” The energy built over the two sections, preparing for the third movement titled “Riff for Everyone,” in which Laura Ardan entered the fray with clarinet in hand. Ardan began in the background next to the piano before moving to the front of the stage — strutting and enjoying the delectably free-wheeling character of her prominent part. When the ovations came, Ardan humbly dragged pianist Peter Marshall from behind his instrument to spotlight his role in the music, a part closely connected to hers when the final section began. “Symphonic Dances from West Side Story” followed, making for an ear-opening comparison to “Prelude, Fugue and Riffs.” The composition marked the connections between the works and the evolution of Bernstein’s style over the intervening decade. Whether familiar with the music from the 1957 classic musical, either from the original stage work — which was brilliantly performed by Atlanta Opera this past November — or the iconic 1961 film, audience members can easily follow along even if they don’t appreciate the technical, structural prowess of this crowd favorite and most frequently performed of the composer’s orchestral works.

It’s not that “Symphonic Dances” isn’t a serious piece of music, because it is. But it is also true that Bernstein’s more somber and ruminating orchestral works are simply not played as often and sometimes avoided in programming — his three symphonies being a prime example. Even in retrospect, while many have come to honor Bernstein’s overall oeuvre, it’s the musicals, songs and dances that kept Bernstein in the public eye as composer during his heyday in the 1940s and 1950s.

The second half of the concert delivered a veritable potpourri of such excerpts, almost a dozen if counting each identifiable title separately. Mezzo-soprano Cooke and baritone Lattanzi join in this excursion, which time travels through excerpts beginning with 1944’s musical On The Town to 2006’s To What You Said.

Cooke and Lattanzi both sang their selections well, whether lyrically thoughtful or lighthearted and humorous. The latter was the general trend in this portion of the concert, as confirmed with the final number titled “Conga,” from the 1953 musical Wonderful Town. The final tune came across as a fun — if near-kitschy — showpiece in which six gentlemen from the ASO’s chorus joined Cooke in the comic song-and-dance, with Lattanzi and conductor Allen ultimately joining in as well. It’s the kind of ending that made for an easy-stepping exit off stage as the music reached its final bars.