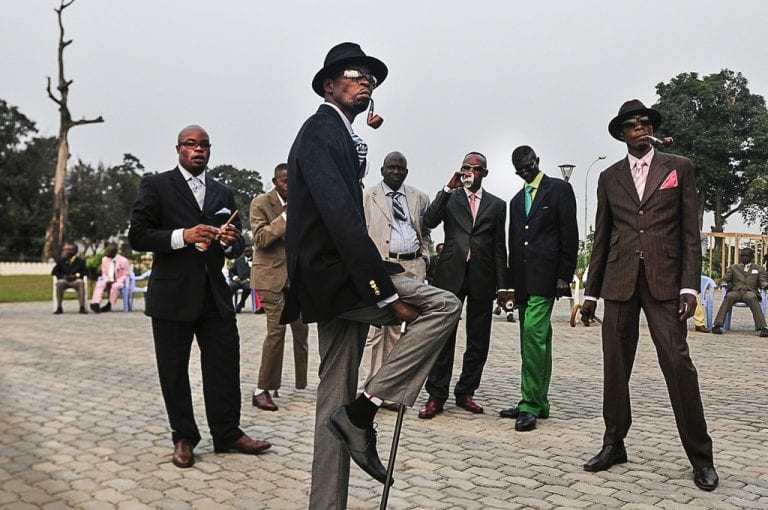 Dandy Lion: (Re) Articulating Black Masculine Identity, which shows fashion as a form of resistance, is on view through April 28. (Courtesy of Hammonds House Museum)

Human Trafficking: The Battle Continues. The exhibition features more than 20 artists who use their craft and skill to display works that bring awareness to the issue of human trafficking. Opening reception on January 19 at 7 p.m. Through March 12. The Shambhala Center of Atlanta.

Run! Jump! Fly! Adventures in Action. Families are invited to participate in activities designed to teach youth to maintain happy and healthy bodies. Activities include kung fu, surfing, snowboarding and yoga to build strength, coordination, balance and endurance. Opens January 19. Through May 27. Children’s Museum of Atlanta.

David Priess: How to Get Rid of a President: History’s Guide to Removing Unpopular, Unable, or Unfit Chief Executives. The author, a political scientist and former member of the CIA, presents the history of several vivid maneuvers and schemes that have attempted to remove U.S. presidents. January 15 at 7 p.m. Jimmy Carter Presidential Library.

Sneed Collard: Warblers & Woodpeckers: A Father-Son Big Year of Birding. The author discusses his latest book, as well as personal birding experiences he and his son have had. January 17 at 7 p.m. Brickworks Gallery.

Moonlight and Magnolias. This show offers an inside look at the men behind the writing of Gone With the Wind. Ultimately, the group locks itself in an office with five days’ worth of peanuts and bananas. Through January 27. Georgia Ensemble Theatre.

Deborah Dancy: The Edge of Time. The artist presents her oil works on canvas, which embrace the natural ambiguity of abstraction. Through February 2. Marcia Wood Gallery.

A Doll’s House, Part 2. Based on the classic play by Henrik Ibsen, the coproduction between Aurora Theatre and Actor’s Express takes the story in an unexpected direction. Nora, who left her husband and family to become a successful author, returns 15 years later to her old home to ask her husband for a divorce. Through February 10. Aurora Theatre.

January Group Exhibition at Mason Fine Art. A variety of artists present works including a juried exhibition by artists from the Goat Farm, a selection of work by Atlanta artists and a special exhibition titled Between the Deep Blue Sea and the Universe by metal artist Corrina Sephora Mensoff. Through February 16. Mason Fine Art.

Fernando Gaspar: Floating Machines. Composed of 15 paintings, the exhibition advances the artist’s interest in the ancestral biologics within and between a primeval earth and sky while giving a nod to his Southern European mannerisms. Through mid-March. Bill Lowe Gallery.

Human Trafficking: The Battle Continues. More than 20 artists who use their craft and skill to display works that bring awareness to the issue of human trafficking. Opening reception on January 19 at 7 p.m. Through March 12. The Shambhala Center of Atlanta.