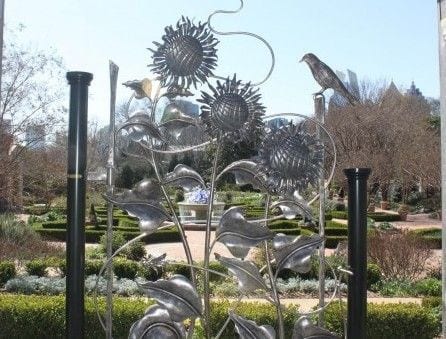 Andrew Crawford is one of those lucky artists whose artistic skills are the basis for a very successful business. The Atlanta-born sculptor owns Andrew T. Crawford Ironworks, a metal workshop admired for its stair railings, fencing, light fixtures and other handcrafted works. While good design and impeccable craftsmanship are hallmarks of both his art and commercial work, their difference in tone is evident in simultaneous exhibits at Sandler Hudson Gallery and the Atlanta Botanical Garden. “Recent Work,” at Sandler Hudson through April 7, surveys Crawford’s sculptural endeavors since 2003. He elevates common objects, such as a pencil, a wrench or a rifle, by transforming them into elegant sculptures in steel or bronze, often with a personal twist.

“Battleship” (2009), a large vertically positioned vessel made of fabricated steel, highlights his deft handling of scale, which Atlantans may have observed with “Lift,” a monumental sculpture on 10th Street behind the Federal Reserve Bank building.

More recently, Crawford has also begun to manipulate found objects made of his favored metals. He cut down a cast-iron manhole cover into a gun in “Pothole Pistol” (2012) and pared an enameled cast iron tub to create the bottle in“Bathtub Gin” (2012). "Pothole Pistol," made from a manhole cover.

Unlike Pop artist Claes Oldenburg, who purposefully placed his monumental everyday objects directly on the ground, Crawford leans to a more formal presentation. His sculptures are meticulously mounted on bases, and the smaller works elevated on pedestals, adding a sense of gravitas and seriousness that unfortunately neutralizes the humor and playfulness of the objects.

In contrast, “Garden Gates With Andrew T. Crawford,” at the Atlanta Botanical Garden through the end of April, is imbued with a magical sense of whimsy. The fabricated steel gates are strategically placed to highlight different aspects of the garden; finding them is somewhat like a treasure hunt. Many respond thematically to their environment. In the Edible Garden, which is planted with herbs and vegetables, the artist has installed a gate where tall stalks of corn serve as the pickets of his fence. In the Cascade Garden, an area dominated by a large pond, his sinuous spokes look reed-like. Other gates showcase his fluidity with the material as he explores a diverse range of styles. In the café area, the pointed spiraling pickets of his forbidding “Twisted Bar Gate” (2011) evoke the feeling of medieval lances. Meanwhile, the “No Trespassing” sign on “Bird Gate” (2011) feels almost comical, surrounded as it is by friendly cardinals, woodpeckers, owls and a hovering hummingbird sucking nectar from a flower.

Crawford’s designs can also be quite elegant. In “Bog Gate” (2012), the posts are reeds with three-dimensional leaves erupting from the stems. The cross rails are a fluid S-shaped line, the visible trace that his playful dragonfly wove through the tall-standing plants. “Lizard Gate” (2012), at the entrance to the Japanese Garden, also shows the technical precision the sculptor has achieved with bronze as he weaves six of the reptiles into a design that is both intricate and graceful.

These last two gates make an interesting comparison with the gallery work. Crawford has done a fantastic job elevating his industrial design work to an art; it remains to be seen whether he will allow some of the contagious energy and playfulness he has so successfully achieved in his design work to filter back into his static and serious gallery practice.