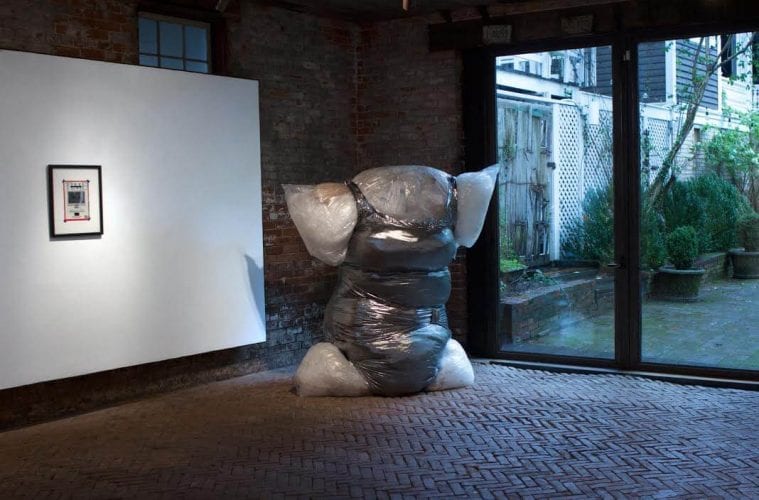 Review: “Ancient Art Objects” is an acute examination of the contemporary

“Contemporariness inscribes itself in the present by marking it above all as archaic.” Lifted from philosopher Giorgio Agamben’s essay What Is the Contemporary?, this cryptic statement informs curator Katie Geha’s Ancient Art Objects, which closed at Whitespace Gallery on September 9.

Steeped in the philosophies of Friedrich Nietzsche and Walter Benjamin, Agamben’s text is dense and difficult. He suggests that a “true contemporary” is one who understands his temporal place. He is not, to borrow Agamben’s metaphor, blinded by the light; he can see into the dark of his own epoch. He is untimely, and as such he is positioned to see the contemporary most acutely. A series of watercolors by Rosemary Mayer. (Photo courtesy of Kristina Ford.)

Ancient Art Objects opens with a series of watercolors by Rosemary Mayer, a multimedia artist and founding member of the feminist gallery and collective A.I.R. (Mayer’s work is the focus of Beware of All Definitions, curated by Geha and Marie Warsh at the Lamar Dodd School of Art that opens September 8.) Mayer’s five watercolors date to 1983 and show Greek vase forms, expertly rendered in loose marks and lacking the red- or black-figure painting common to such ceramic forms. Mayer remained enthralled with the past throughout her life; she refused an offer to study classics but was inspired by the Epic of Gilgamesh and lives of Roman women. Her renderings transcend the didactic, each labeled with their art historical name and another, disjunctive word or phrase: Amphora/Severed, Hydria/Suffocation or Lekythos/Fear, to name a few. These ceramic forms had specific functions in the ancient world. The latter refers to a vessel made to store oil and sometimes used to pour libations during funerary rites. Mayer’s association of the ancient object with fear casts an idiosyncratic light on the past, temporarily illuminating it through the artist’s eyes.

Nearby, Jeff Williams’ works blur the line between two- and three-dimensions. Buckminster Fuller (2017), one of three featured works, is a conventional, rectangular, framed work almost entirely obscured by nylon fiber that looks like encrusted layers of dust. Interestingly, Fuller was a forward-thinking, multidisciplinary inventor who dubbed his inventions “artifacts.” Such a moniker fits Williams’ objects perfectly. Smudgy, finger-sized marks reveal fragments of the imagery below, suggesting the unknowable nature of the past. Made to suggest touch, the marks suggest an engagement with the past, whether it is scholar or artist. The art historian or archaeologist gleans what she can from limited sources, in a perpetually incomplete task; the artist imagines and associates, ever bound to the present and its conventions.

Inserting color into Ancient Art Objects are works like Karen Lederer’s The Bathers (2017) or Padma Rajendran’s In the Midst of Ruins, An Earthen Cave is a Palace (2015). Lederer’s still life comes with a name lifted from Cézanne and Matisse’s classicizing, Arcadian scenes. Lederer translates this Western fantasy of Mediterranean bliss via bright flowers, Zabar’s wrappers, and the paper Greek-motif coffee cups of New York diners. Rajendran’s conjures interior, domestic space and the arcane iconography in a vivid and saturated palette.

Despite the strength of the two-dimensional work, sculpture is the most commanding of Ancient Art Objects, often possessing the aura of time-worn relics. An exemplar of this is Ry Rocklen’s Aluminum American (2017), a cast metal form that depicts a folded Western-style shirt made with the stars and stripes of the American flag. Inscribed on the label is “Scully,” a California company that dates back to the early twentieth century. Though cast in solid, metallic gray, it oozes vintage appeal even though it’s not clear that it’s actually old. The commodification of mid-century stuff in contemporary consumer culture ranges from irony to fetishization. Rocklen’s sculpture resonates with both, endowed with an unlikely and strange mystery of a Medieval relic. Siebren Versteeg’s Danny Liker (2017) consists of a steel stick figure with the elongated proportions of a Giacometti and a pose lifted from Rodin. Perched on a concrete block cast to look like a skull, the figure stoops forward as if absorbed by a scrolling feed of images cycling on a tablet screen. Steel and concrete suggest modernity and progress –the stuff of skyscrapers and Van der Rohe! — but here they read as ruins of a not-so-distant past. Juxtaposed with the tablet’s sleek screen, a disjunction occurs of real and digital. As is the case with Rocklen’s Aluminum American, medium matters. The weighty gravitas of metal suggests persistence at odds with the currents of fashion or the ephemerality of an Instagram feed.

Jaime Bull’s Big-Beauty Venus towers over the exhibition, made of a humble but ubiquitous material, plastic bags. Clad in a metallic spandex suit, Venus is pure torso. Her missing head, arms and legs suggest ruined sculptures of the past: the enigmatic figurines of the Paleolithic era or so many broken Greco-Roman goddesses. Given the theoretical context of the show, Big-Beauty Venus reads as a tongue-in-cheek feminist icon that riffs on a very long tradition of woman-as-objectified-image. Despite its seeming positivity, I can’t help but read this as a warning, too. Cheap plastic will be the hallmark of our era to posterity, what archaeologists of the future unearth.

Classicism informs Kaleena Stasiak’s Façade (2017), a pair of ersatz Ionic columns made of plywood and particle board. Propped against the wall, their lack of structural function is obvious. Their falsity refers back to a long tradition of decorative engaged columns and pilasters in architecture that proliferated in the Roman era — notably after they appropriated the visual language of Classical Greece. Such a form is steeped with myriad associations: democracy, imperialism, Western tradition, Palladian quotation, the antebellum South and so on. It’s a powerful chain of associations that suggest both Jameson’s deadened pastiche and Derrida’s notion of the floating signifier. Here, though, it serves as a jolting reminder of the persistence of the archaic. Similar themes are explored in Max Warsh’s understated photographic collages, such as the cut-and-paste architectural imagery in Mysterious Sympathy (2015).

Agamben’s subject is the most slippery and ephemeral of subjects: the moment, the cusp, the fractured vertebrae of time that is neither past nor future. Geha’s Ancient Art Objects offers a snapshot of the contemporary, citing the past with varying degrees of seriousness and irreverence. Art always has a relationship with the past, of course, but this is more dialogic and self-conscious. Suggested is not only an awareness of the past but also the foibles of the present, already fading to anachronism. Perhaps most salient is the notion of time that Ancient Art Objects evokes: this is future’s past.