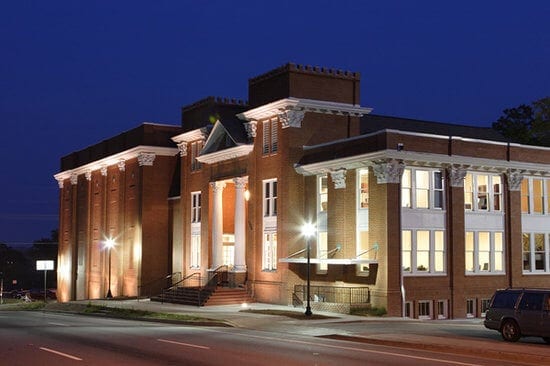 The City of Lawrenceville has hired a design team for a $26 million arts complex in downtown that will expand the home of the Aurora Theatre with a new 500-seat theater, educational facilities and additional parking. The project is scheduled to be completed in 2020.

City officials selected Stevens & Wilkinson to design the complex. That company’s previous work includes the Bailey Performance Center at Kennesaw State University, the Corn Center for the Visual Arts at Columbus State University and the Fine Arts Center in Albany.

“We look ahead to seeing how they capture the city’s vision architecturally and help take us one step closer to embodying the arts and education hub we are as a city,” Chuck Warbington, Lawrenceville’s city manager, said in a press release.

Stevens & Wilkinson’s John Abbott said the firm intends to combine modern design elements with the city’s historic downtown. “We are excited,” Abbott said. “Our goal is completing it in 2020.”

The design firm will work in tandem with Croft and Associates, the project management team selected by the city.

Anthony Rodriguez, Aurora’s cofounder and producing artistic director, said the new complex is recognition that the arts do make a difference.

Plans call for the work to be done so that the Aurora will remain fully operational during the construction phase.

Anthony Rodriguez, Aurora’s cofounder and producing artistic director, noted that the theater produces over 800 events a year that serve 80,000 patrons annually. They opened their current theater in 2007. “This new facility will give us the ability to host our larger productions and allow us to fully realize our Learning Library educational shows, which entertain and educate over 20,000 Gwinnett County students every year,” he told ArtsATL. “To say we are excited about the future would be an understatement. We believe in this community and know that the arts make a difference. We have built a place where a wide range of people, with vastly different world views, can come together and through the lens of art, reach a greater understanding of one another.”

Aurora cofounder and associate producer Ann-Carol Pence remembered when Aurora staged its shows on the fourth floor of Lawrenceville’s City Hall. “We knew then that Lawrenceville was going to be an incredible partner,” she said. “Who literally gives the key to City Hall to a theater and trusts them to ‘lock up at night’? Creating an exciting meeting place where arts meets community will be the culmination of the dream we envisioned 22 years ago.”

Pence said the project is a reminder that the arts are a pathway to connection. “We have to change the mindset,” she said. “Arts are not a risky investment. Arts return enormous dividends to this community.”