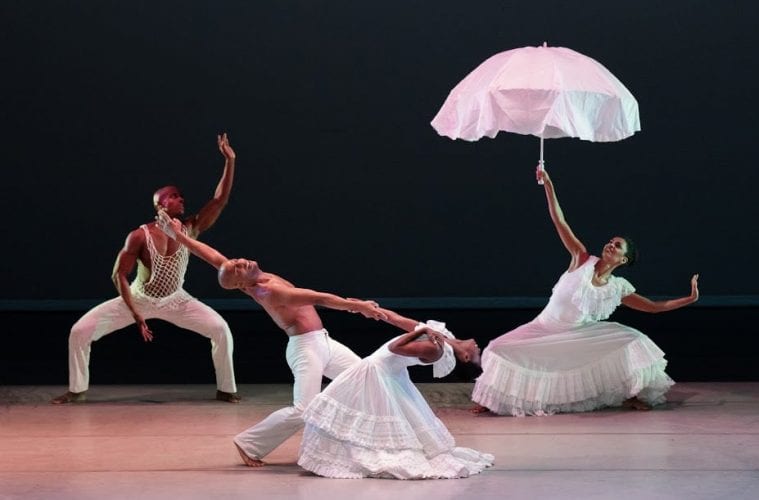 Review: Alvin Ailey brilliantly reminds Atlanta of the importance of our humanity

The Alvin Ailey American Dance Theater returned to Atlanta’s Fox Theatre last week, with Thursday’s opening night showcasing a collection of contrasting pieces: Twyla Tharp’s The Golden Section, Ulysses Dove’s Episodes and Alvin Ailey’s Cry and Revelations. Each piece, a reminder of common experiences throughout life and a celebration of the growth that comes from those moments, served to unite an audience of all ages and diverse nationalities.

To Robert Ruggieri’s striking sound score in Episodes, company dancers gradually filled the stage in black, futuristic costumes while executing sharp, combative movements. The piece explored the challenging question — can men and women live with each other, or can they live without each other?

While the entire cast executed each movement clearly and sharply, it was company dancer Rachel McLaren that displayed true power on stage. Her ability to command attention from both the audience and her fellow cast members, without overexaggerating her movements, displayed a brilliant use of her artistic gifts. Dove’s work proves there are moments of self-discovery in which others cannot be of help, as well as moments of solidarity in which support from others is necessary to progress — making his question impossible to answer.

Following the dark and intensive Episodes was Twyla Tharp’s The Golden Section. Originally choreographed as the grand finale of the 1981 Broadway production The Catherine Wheel, this 16-minute piece became a standalone work just two years after its Broadway debut. While Tharp’s pieces are known for their creativity and physical demand, Chalvar Monteiro displayed Tharp’s work at a deeper level. I could feel his fun-loving personality as energy shot beyond his fingertips — as if he were personally inviting audience members to join him in this nostalgic moment. As the stage shimmered in gold, Monteiro demonstrated jaw-dropping movements that may have seemed effortless but actually required impeccable strength to execute smoothly. Because company dancers embodied David Byrne’s new wave rock sound score rather than displaying the exhausting labor of Tharp’s choreography, The Golden Section was my favorite piece of the night.

Cry, choreographed by Alvin Ailey as a gift to his mother, was performed by Linda Celeste Sims. As Alice Coltrane’s “Something about John Coltrane” began, Sims struck the audience with her very first movement — a deep breath that slowly left the body as she lowered her arms from above her head toward the ground. Sims, capturing the spirit of Ailey’s choreography, gradually allowed the audience to feel her pain.

In this beautifully rendered three-part solo, Sims took us through the trials and tribulations of life. Not only did Sims expose the hardships of life, but she also celebrated the triumphs that came from those moments of pain and exultation.

Ending the night was Ailey’s signature piece, Revelations. Set to a suite of 10 spirituals and gospel songs, the masterwork took the audience through a series of revelations, and Ailey demonstrated an exceptional blend of African and modern dance throughout each piece. “Pilgrims of Sorrow” (the first revelation) opens with the gospel song “I’ve Been Buked” and a clump formation of dancers dressed in tan/brown earthy clothing.

As the series continues into “Take Me to the Water,” Ailey’s fusion of traditional and modern dance becomes more apparent. While dancing to traditional music and incorporating traditional movements into Lester Horton’s modern technique, the company was able to engage audiences in the energetic piece. Through each revelation, audiences witnessed the development of human artistic expression without ever forgetting its roots.

As artistic director Robert Battle stated in his opening remarks, “Dance has the power to remind us of our humanity.” Thursday night’s performance was more than another amazing spectacle by one of the world’s most respected dance companies. Alvin Ailey American Dance Theater recognized and honored the families affected by the Florida high school shooting that took place the day before opening night. The collection of Thursday’s pieces took us through the trials and triumphs in life to unite us as we celebrated the treasure that is life, love and humanity.